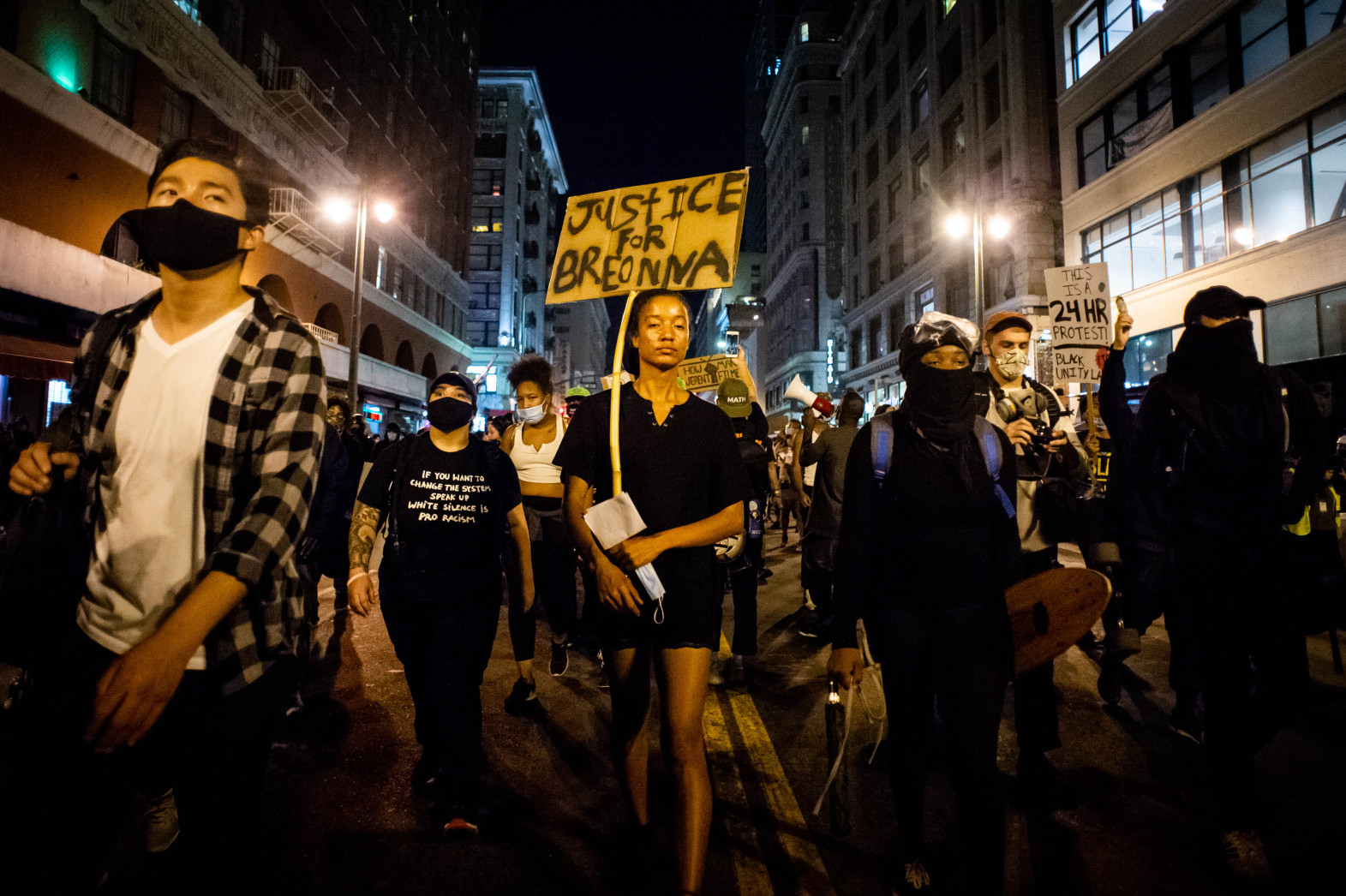 Hundreds of protesters descended on a park and marched through Downtown L.A. on Wednesday, decrying a Kentucky grand jury’s decision against criminal charges for the police officers who shot Breonna Taylor in an early morning drug raid gone wrong in March.

At 7 p.m., the crowd gathered at a park across from Union Station. The mood was initially quiet and somber, but by 8 p.m, loud chants of “Breonna Taylor!” echoed through Downtown streets as a crowd of at least 500 stopped traffic on nearby Los Angeles Avenue, signs in hand.

They later marched through Little Tokyo, passing diners and officers in riot gear guarding the Los Angeles Police Department’s headquarters. The presence of law enforcement in the area grew increasingly noticeable and a helicopter was hovering overhead by 9 p.m.

Marching protesters were followed by a procession of vehicles, which in turn were tailed by police.

“I’m here in honor of her name, and all the countless murders, especially here in L.A” said Elizabeth Rodriguez, of LA.

“Words can’t express the anger and frustration for such a long time now. You can’t really do anything about it.”

The evening demonstration reflected a new chapter in what has been a months-long series of demonstrations downtown and across the nation, calling for justice in the wake of several police shootings of people of color.

Charges were not filed against Louisville Police Sgt. John Mattingly and Det. Myles Cosgrove. They were serving a warrant at Taylor’s apartment March 13, when her boyfriend shot at them under the impression that the officers were intruders. They returned fire, fatally wounding Taylor.

The grand jury did indict a former Louisville Detective, Brett Hankinson, who fired blindly into a neighboring apartment with three counts of first-degree wanton endangerment. He was not involved in Taylor’s death.

Not long after the announcement, Black Lives Matter Los Angeles called for people to make their voices heard through the ballot box and through protest.

“We must remain in the streets,” read a statement. “We cannot just #SayHerName, but must do the work to honor Breonna Taylor’s life and protect the lives of Black women and Black people who continue to be targeted by the law enforcement and criminal justice systems that place targets on our backs.”

The Associated Press contributed to this report.