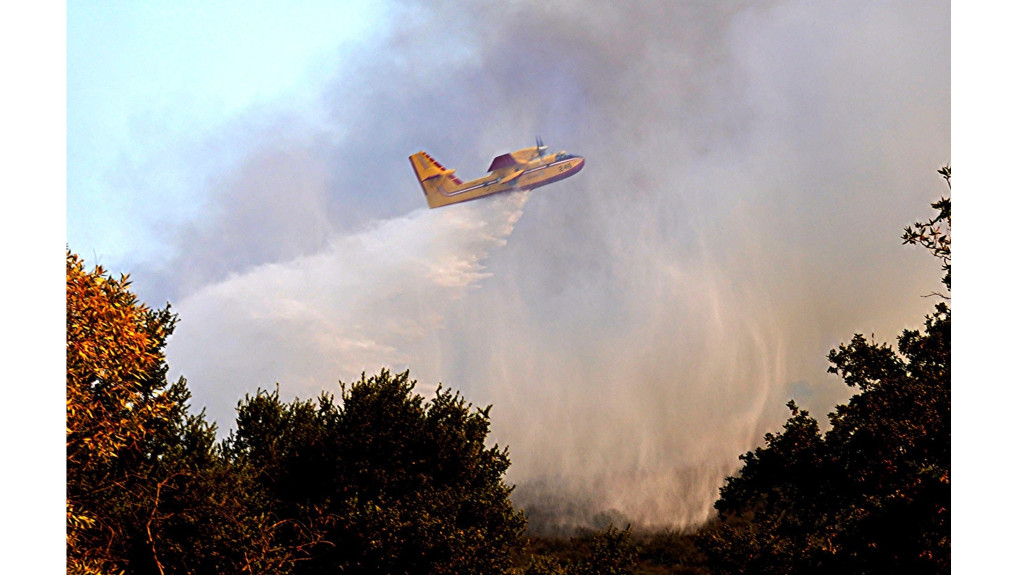 The Martindale fire was reported at 3 acres at 2:51 p.m., Los Angeles County Fire spokeswoman Leslie Lua said. Hot, dry conditions saw the blaze explode to more than 200 acres in less than 30 minutes. The conditions continued to push the fire, and by about 4:30 p.m. the blaze was estimated to measure about 300 acres, LA County Fire said.

The Angeles National Forest later said that new mapping showed the fire was held at 230 acres and that it was 20% contained.

Crews managed to halt the forward spread of the fire, which had not grown larger as of 7:15 p.m., County Fire spokeswoman Imy McBride said.

“We’re just going to keep some ground crews out there to deal with any hot spots,” McBride said.

Residents of between 10 and 20 homes near the Bouquet Reservoir Dam and south to mile marker 11.5 of Bouquet Canyon Road were ordered to evacuate about 4:30 p.m., Los Angeles County Sheriff’s Sgt. Cox said. Those living from Mile Marker 11.5 to Texas Canyon Ranger Station should be ready to leave in case flames spread, officials said. Those instructions and advisories will remain in effect through the evening, and will be updated Tuesday morning, county fire officials said.

There were no reports of damaged buildings or injuries as of 6 p.m., Los Angeles County Fire spokesman Bernard Peters said. Bouquet Canyon Road was closed at Vasquez Canyon and north to the reservoir.

At least 150 firefighters and 12 aircraft were tackling the blaze Monday afternoon, Lua said.

The fire was burning in the Angeles National Forest in thick brush and driven by wind, county fire officials said. It devoured brown and yellow vegetation as it raced along Bouquet Canyon, spreading rapidly to the south and southeast toward Santa Clarita. A thick plume of smoke rose over the foothills north of the city.

The cause of the fire was under investigation.

The Martindale fire broke out west and north of the massive  Bobcat fire. That blaze started in the Angeles National Forest earlier this month near Azusa, and has scorched more than 114,200 acres. The larger fire has destroyed 82 homes and damaged 28 others. But its growth has slowed in recent days, and it was 62% contained as of Monday afternoon.

Another fire that started at about 1 p.m. Monday in Acton was extinguished within an hour and held to about 10 acres. No structure damage or injuries were reported in that separate incident.

In addition, two other fires that began last month in Los Angeles County, the Ranch 2 fire in the San Gabriel Valley and the Lake fire near Castaic, have charred a combined total of about 35,000 acres. Well over 2 million acres of California have been ravaged by wildfire so far in 2020, which is more than any other year on record.

Temperatures near Santa Clarita were in the upper 90s Monday afternoon and humidity was below 10%, National Weather Service Meteorologist Kristen Stewart said. Winds were blowing an average of 15 mph, and expected slow to between 6 mph and 8 mph by midnight.

The Santa Clarita Valley, as well as the mountains of Los Angeles and Ventura Counties, were under a Red Flag fire warning until 5 p.m. Monday due to an elevated risk of wildfires. Officials suggested that those living in potential hot spots clear out dry brush and other possible fuels near their homes. Removing outdoor clutter may also give firefighters better access to their property in case it is threatened by flames.

In the event of an evacuation warning, people should remember to pack important documents, medications, basic supplies and pet food, if necessary. Vehicles should be parked facing the street or evacuation route so residents can leave as quickly as possible.