Couple receives mountain of EDD mail that isn’t theirs 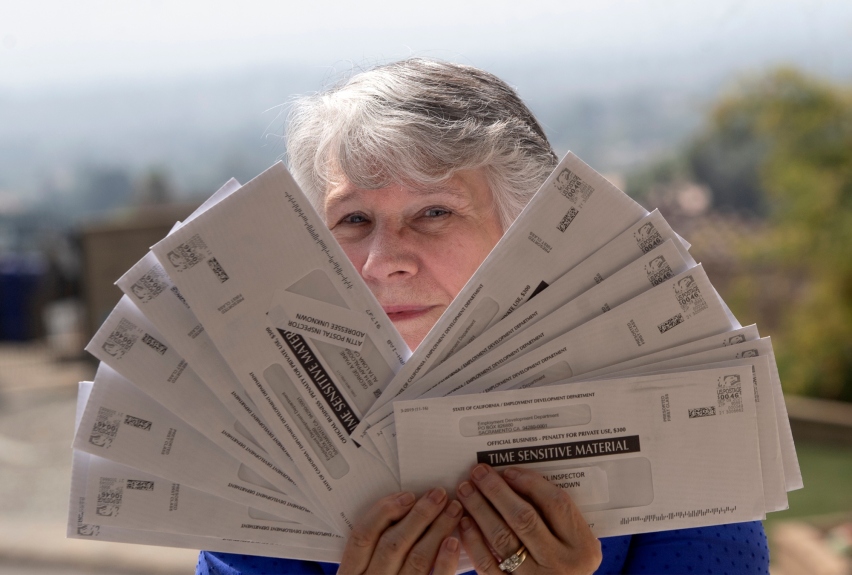 Attention Jeffrey B. Feller, Melvin M. Mosby, Patricia Ellis, Laquita Ortiz and dozens of others wherever you are, if you even exist.

That letter you’ve been waiting for from the California Economic Development Department, possibly containing an unemployment benefit payment, was indeed delivered — just not to you.

It’s been sent to Tom and Andrea Gray, a perplexed, retired Rancho Cucamonga couple who can’t figure out why they keep getting mail from the EDD bearing their address and the names of folks they don’t know.

Since June, their mailbox has been flooded with more than 50 such letters.

The Grays feel like they’ve entered the Twilight Zone and fear criminals may be using their address illegally to obtain COVID-19-related relief benefits. They have been dutifully mailing the unopened letters back to the EDD, but new ones keep arriving.

“Why doesn’t it stop?” Andrea Gray, a 74-year-old former nurse, asked in exasperation.

The first week they received only a couple of EDD letters, prompting them to dismiss the mail mix-up as a fluke. But the numbers steadily grew. Eight more letters trickled in over the next three weeks. Then a bunch of 10, followed by the mother lode — 16 letters delivered on a single day this week.

“We have never gotten 16 in one day.” said a dismayed Andrea Gray. “They are multiplying like rabbits.”

First, he took the letters to an EDD office in Rancho Cucamonga, but was turned away because staff there only assists job seekers.

His next stop was the San Bernardino County Sheriff’s Department. “They told me to sit in the lobby,” he recalled. “Then they came back out and said the postmaster general is responsible for running the investigation into EDD fraud.”

Gloria Huerta, a spokeswoman for the San Bernardino County Sheriff’s Department, did not immediately have details regarding the encounter with Tom Gray, but said the referral to the U.S. Postal Service was appropriate. “The post office investigates mail fraud,” she said in an email

After visiting the Sheriff’s Department, Tom Gray gathered up his bundle of mail and headed to a Rancho Cucamonga post office, where he was told by employees to mark the letters as undeliverable and drop them in a mailbox.

He and his wife have been painstakingly doing that ever since, but to no avail.

“We write on the letters that the individuals named don’t live here and send them back,” Andrea Gray said, adding that she refuses to open the letters to see if there is a check or debit card inside, both of which can be used to pay claimants. “I don’t care what’s inside. Either people need the money or it’s a bunch of fraud.”

It’s unclear whether any of the individuals whose names appear on the EDD envelopes received by the Grays live in California or even exist.

A public records search for 14 names supplied by the couple found only two matches for possible California residents. Seven names matched individuals who may reside in Texas, Virginia, Pennsylvania and other states, while public records could not be located for the five remaining names.

The Southern California News Group called several individuals whose names match those on the mail received by the Grays, but they either didn’t answer or their phones were disconnected.

Unemployment fraud has been rampant in California since the start of the COVID-19 pandemic in March 2020.

In January, Deputy U.S. Labor Secretary Julie Su said scammers have been paid as much as $31 billion in California unemployment funds. Court dockets are overflowing with cases involving inmates and others who have used fraudulent and stolen identities to receive benefits to which they are not entitled.

EDD officials said Friday in a statement the agency is actively working to stop scammers.

“The EDD is aggressively fighting fraud in the wake of unscrupulous attacks on the unemployment program here in California and across the country,” officials said. “At the EDD, we are dedicated to combating fraudulent activity and protecting benefits for legitimate California workers in need.”

Suspected fraud can be reported by visiting Ask EDD and selecting the “Report Fraud” category to submit a fraud reporting form online. Individuals also can fax 866-340-5484 or call the EDD fraud hotline at 800-229-6297.

Meanwhile, the Grays can’t figure out why their mail carrier keeps bringing stacks of EDD letters to the home in Rancho Cucamonga’s Alta Loma neighborhood they have owned since 1974. “It’s quite obvious that it’s a single-family dwelling and that we don’t have 16 people living here,” Andrea Gray said with a chuckle. “There’s no more room at the inn.”