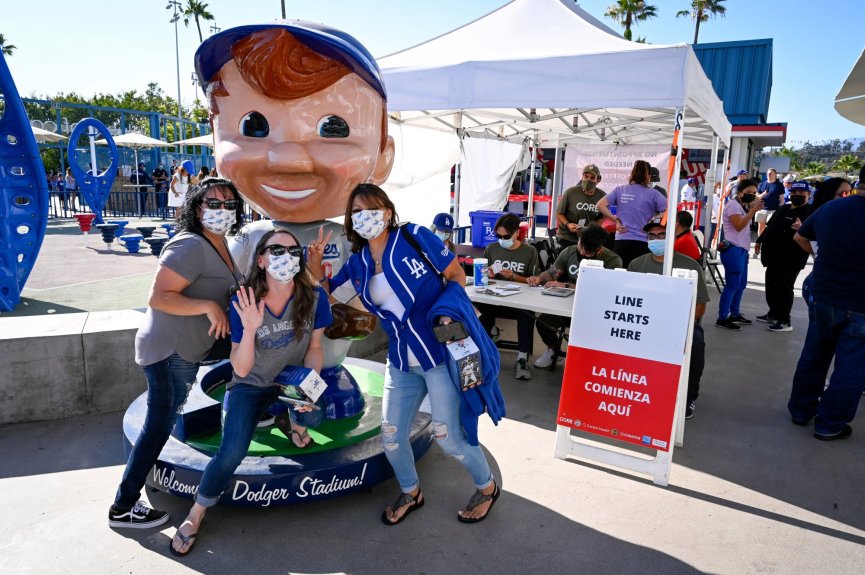 From the corner barber shops and neighborhood breweries to Dodger Stadium, Los Angeles County officials and business owners grappled with how to enforce the rules on the second full day of a renewed mask mandate on Monday, July 19.

Adding urgency to the effort: The number of people hospitalized by the coronavirus has more than doubled since mandates were lifted in mid-June, officials confirmed on Monday, July 19. Those hospitalizations have climbed from 218 in mid-June to 544 on Monday, according to the state’s dashboard.

And as the tally ticked upward again, officials — wary of higher numbers of cases among unvaccinated people — moved swiftly to encourage compliance but cautioned that there could be further enforcement, if necessary. It was unclear, however, what that enforcement could entail in a county where Sheriff Alex Villanueva and LAPD leadership have said they will not cite residents who don’t follow the rules.

With such numbers, the renewed mask mandate — requiring everyone 2 years old and up,  regardless of vaccination status, to wear face masks in indoor settings — took effect Sunday, as businesses large and small, public venues and other public indoor spaces geared up for another bout with a relentless disease.

Dodger Stadium was among those businesses, as it began a homestand Monday. At Chavez Ravine,  the new requirement meant if you’re in a covered stadium concourse or at a concession stand picking up a Dodger Dog, you are “indoors.”

A stadium post on the requirement emphasizes that “masks must be worn” “except while seated and actively eating or drinking.” The Dodgers still are not considering neck gaiters, bandanas and masks with valves as appropriate face coverings,” according to the post.

It was not clear Monday afternoon how stadium staff would be enforcing the ordinance. But it was clear by Monday that county public health officials were prepared to go beyond “encouragement” in the effort for people to comply.

On one hand, officials said they were working “closely” with businesses to ensure they have the proper protocols and measures set up to inform employees and customers of the mask requirement.

Fueling that effort have been early complaints of non-compliance, officials said Monday.

“Public Health utilizes education and information sharing as the primary step in gaining compliance,” according to a statement. “When compliance is not achieved at worksites and businesses, enforcement may include issuance of a notice of violation or a citation.” Regular inspector visits to address issues of concern are also possible, county officials said.

Still, officials said that given the increased risk seen from the Delta variant, “we expect that individuals and businesses will immediately abide by this sensible and non-intrusive precaution.”

And several businesses have expressed their intent to comply, even as they do so knowing that that their businesses were just starting to come back from the hit they took in the days of more restrictive measures.

County law agencies’ leaders are in “encourage mode,” adding that further action would be taken only if a compliance issue escalated.

The renewed specter of regular inspections was enough to spur visions of the height of the pandemic for many business owners, when inspectors would visit to check in on compliance. Vic Chouchanian, co-owner of San Fernando Brewing Company, remembered those days well.

“Here we go again with the board of health coming in,” he said, with a tinge of concern that beyond mask mandates could be tighter restrictions, if the numbers get worse.

Cindy Burton, owner of Speakeasy Tavern in Redondo Beach, said it could be challenging to enforce at places like bars.

“It’s gonna be hard to enforce it in a bar or a  restaurant. When people come in they have to wear their mask. When they sit down and eat they obviously can’t wear it,” she said.

Still, by Monday her staff had already had to deal with customers who decided to leave after being asked to put on a mask.

Experts — and many business owners — say that it’s better to adhere to the mandate now than to pay a larger price down the road.

“At this stage, having the mandate and requiring voluntary compliance with it is appropriate,” said Dr. Robert Kim-Farley, at UCLA’s Fielding School of Public Health. “We shall see over time the effect that we are going to achieve with this mandate.”

He likened the mandate to a big super tanker ship making a turn. You turn the rudder and it takes a couple of miles for the ship to turn because of its huge mass.

Masks, in effect, are an attempt at a low-tech turn, in which the results will be seen in a couple of weeks, he said.

While there remains million unvaccinated in he county, Kim-Farley was optimistic we would not return to the days of January, the darkest days.

“We will not be going back to that time of the virtual tsunami, of the early part of this year, from the back-to-back holidays. It’s just because there are so many now who are vaccinated …” or have natural immunity.

But that’s not an excuse to leave the battle against the disease undone, he said.

“We still have substantial numbers of persons in L.A. that have not been vaccinated. Therefore, this this is the reason why we have to ratched up the control measures to now include masking whenever indoors for vaccinated and unvaccinated persons.

“The facts are that the people who are suffering severe illness and death, 99% of them are unvaccinated. That should be a wake up call,” Kim-Farley said.

“L.A. County continues to see alarming trends of increased community spread,” said L.A. County Public Health Director Barbara Ferrer in a statement Monday, referencing the term “community spread” in a context sounding much like the early days of the pandemic in 2020.

But this time, the protagonist is a mutant and more infectious version of the original virus, which appears to be thriving among people who are not vaccinated. Complicating matters, officials said, is the close interaction of masked and unmasked people, some vaccinated, some not.

“The spread of the more infectious Delta variant through intermingling of unmasked individuals where vaccination status is unknown has caused a rapid spread of COVID-19 that is resulting in a significant increase in cases and hospitalizations,” Ferrer said.

Among cities with independent health departments: Pasadena reported 15 new cases on Monday, for a total of 11,558; they city’s death toll remained at 351. As of Friday, Long Beach reported a total of 948 deaths and 54,741 cases.