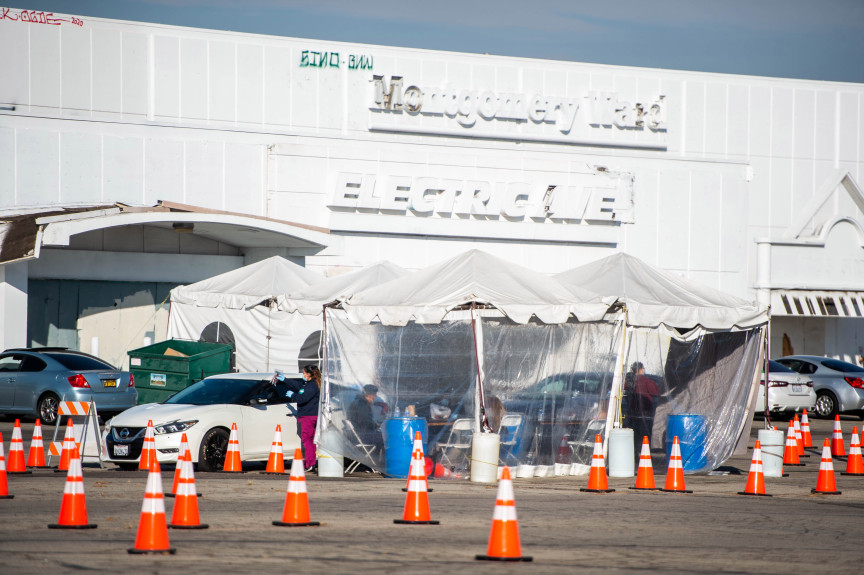 As the number of daily new cases continued to increase in L.A. County, public health officials have been warning for weeks that hospitalizations and then deaths would rise soon as well.

This week that prediction began to at least partially play out as the number of people hospitalized for the coronavirus rose steadily, now up to 953 people from 750 a week earlier.

“We’re headed into hard times,” said Public Health Director Barbara Ferrer during a midday briefing Thursday, Nov. 12. “But we have the opportunity to make these times not as hard as they could be if we make hard choices.”

Among those hard choices could be forgoing Thanksgiving gatherings this month. And for college students returning home from school, Ferrer suggested not doing so. If students do come home, she recommended to stay home for distance learning through the rest of the semester.

For those travelling home to L.A. County for the holidays, officials asked that people quarantine for 14 days.

L.A. County reported 2,533 new cases on Thursday, its highest daily case count not associated with a backlog in reporting since August and capping nearly a full week with more than 2,000 cases reported daily. A total of 330,450 people have tested positive for the coronavirus in L.A. County since the pandemic began.

The total number of coronavirus cases in California on Thursday neared the 1 million mark as the nation continued to experience a surge in new cases as a whole, amassing more than 140,000 new cases.

Also Thursday, the deaths of seven people were reported in L.A. County as a result of COVID-19 putting the total death toll in the county at 7,221. Ferrer said it was fortunate that death rates have remained relatively low — remaining around 10 people per day on average — though she expected that number to climb in the coming weeks as a result of increased cases and hospitalizations.

The department only needed to look at data from the surge in July to see there was about a two to three week delay from the time cases began to surge to when officials started seeing increases in hospitalizations and another two to three weeks before more deaths occurred.

“While we’ve made impressive strides, this many new cases could very well result in tragic suffering and death down the road,” Ferrer said.

Despite the increased numbers, hospitals were not overwhelmed with new patients for two reasons: Cases are occurring among people less likely to require hospitalization and improved treatments mean they are staying for less time, according to Dr. Christina Ghaly, Health Services Director.

“This doesn’t though mean that people cannot have very serious conditions and complications from COVID,” Ghaly said.

The chances of getting out of the state’s most restrictive tier seemed ever more bleak on Thursday as the adjusted case rate continued to be at 7.6 per 100,000 people. In order to advance, that rate must fall below 7.0 per 100,000 for at least two weeks.

“Unfortunately with the recent surge in cases, we can anticipate remaining in Tier 1 for the next few weeks,” Ferrer said. “I don’t think this is where any of us anticipated being as we head into the fall and winter. It isn’t just that the recovery journey is stalled, it’s that we have some very tough choices ahead of us as we head into the holidays and winter months.”

If conditions do not improve, Ferrer said a return to further closures could be on the horizon. So she made again a plea for personal responsibility.

“The actions we take now, tomorrow and next week have tremendous impact on the health and well being of people across the county,” Ferrer said. “If we don’t, we’ll have no choice but to look at additional action.”