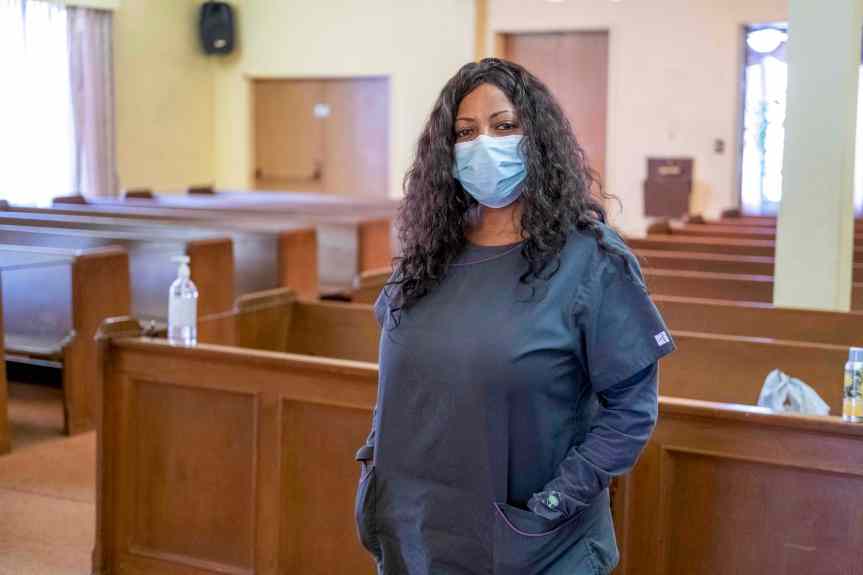 For weeks now, Los Angeles County has been overwhelmed by the onslaught of death.

COVID-19 patients are dying at such an alarming rate — 1,500 over the past week alone, close to 2,000 the week prior — that hospitals, morgues and funeral homes are buckling under the volume of bodies. The pandemic has doubled the number of decedents they normally handle, and COVID-19 now accounts for more deaths than all other causes combined.

Refrigerated trailers have been pressed into duty at some hospitals because they have nowhere to send their deceased patients. Funeral homes, where most of them typically would be sent, are so backlogged that grieving families are turned away or wait up to weeks to bury or cremate their loved ones.

Vidal Herrera, owner of a private autopsy and forensic service called 1-800-Autopsy, says he has been fielding calls from families seeking help.

“This guy’s brother died and he had been calling funeral homes, but nobody wants to help him,” said Herrera, who noted that one mortuary told him they had 100 bodies. “He was there with the police and his brother was still there in bed.”

One family, he said, was told it would have to wait three weeks for a loved one to be cremated. “It was really sad,” Herrera said.

More than 15,000 people have died from COVID-19 in L.A. County — 5,000 of them in just the past month during the peak of the post-holidays surge. Scientists now estimate one-third of the county’s 10 million residents likely have been infected at some point in the pandemic.

Nichol Montague, funeral director at South Los Angeles Cremation Services, said turning families away is difficult, but her storage units are completely full with the deceased and she has no choice. Every delay, every client turned away, breaks her heart.

“We were the first black mortuary in Los Angeles,” Montague said. “Some people have worked with my grandfather. It’s terrible.”

Families in a squeeze

Bill Hawkins, president and founder of Angeleno Mortuaries, which owns 10 funeral homes in northern L.A. County, Ventura and San Bernardino, said families often waiting the longest are those that want to ship the remains of loved ones to another country. Others, Hawkins said, hold off as long as they can for a funeral, hoping restrictions will ease so family members can travel or gather.

“There are so many situations where the families have not been able to be with their loved ones at the hospital or to visit at the nursing home, so they haven’t had the opportunity to say goodbye there,” Hawkins said. “Then they are delayed in carrying out what they want to do. Their families are not able to travel.

“Grief under the best circumstance is brutal, period. But the emotional toll of this makes it so much harder,” he said.

“They need to work around the clock to get the mortuaries the proper permit,” Montague said.

Hawkins confirmed death certificate delays are a leading cause of families waiting so long. The whole process is taking longer, too, because of the pandemic, as most meetings with families are conducted over video conference, Hawkins said.

Mortuaries have called out for better coordination at the state and local level. In many cases, hospitals no longer have decedent-affairs specialists on staff to help facilitate the process. And the state’s Cemetery and Funeral Bureau has not been extremely helpful, Montague said.

“With a lot of hospitals, everything is outsourced,” Herrera said. “When they did away with autopsies, (many hospitals) did away with the decedent affairs.”

Patricia Aidem, a spokeswoman for Providence Health Systems, did not provide specifics about the backlog of COVID-19 decedents at its facilities, but did note they “partner with local mortuaries, which are overwhelmed, to provide temporary morgues at some of our hospitals.”

Other efforts have been launched by the state to deal with the crisis.

The Governor’s Office of Emergency Services on Thursday, Jan. 21, said it had activated its mass fatality management plan run through divisions of law enforcement and a mutual aid plan designed to help county coroners and storage needs. More than 100 refrigerated trailers have now been distributed across the state to serve as small, impromptu morgues.

The office says it also is actively working with neighboring states to secure much-needed assets for handling the deceased, including licensed embalmers. At least one out-of-state embalmer was already on the way, the agency said in a statement.

Additionally, the state has eased rules that will allow some crematories to move faster.

But even with the recent rule change by the South Coast Air Qualify Management District to temporarily allow more cremations, Hawkins said facilities are still limited by their size.

“There are many reasons why the difficulty of getting decedents from their end of life to whatever their final disposition is would take longer, whether it’s burial, cremation or shipping,” Hawkins said. “I’ve heard many many stories of it taking much longer. In some cases, too many.”

To relieve pressures from funeral homes and hospital morgues, the L.A. County Department of Medical Examiner-Coroner accepts bodies for storage, having added additional capacity with mobile trailers earlier in the pandemic.

As of Tuesday, Jan. 19, the coroner had about 310 COVID-19 hospital storage cases, up from 150 a week earlier, and 815 other cases that fell under the coroner’s typical duties of investigating deaths. During normal times, the coroner handles up to 500 bodies, but external morgues have allowed it to store up to 2,000 bodies at a time.

Recently, a handful of National Guard personnel arrived to help the coroner manage the workload.

So far, officials at the Department of Health Services believe the county will not run out of space, barring another mammoth surge. The county morgue, which is operated by DHS and handles remains from the four public county hospitals, was holding 390 decedents on site as of last week with available capacity for 246 more, a spokesperson confirmed.

Herrera, owner of 1-800-Autopsy, said the demand for private autopsies also has been peaking, often fueled by skepticism over whether a loved one actually died from COVID-19 or as a way to clear the remains for transport back to a country of origin.

“They don’t believe it’s COVID,” Herrera said. “They want a definitive answer, so we give it to them.”

Herrera said his autopsy caseload grew by 40% in 2020 with 695 cases, the increase almost entirely due to COVID. Many of the requests for autopsies come from Latino families wishing to send the remains of loved ones back home to a foreign country.

The burden of such widespread death from COVID-19 is taking a toll on the mortuary and autopsy service industry, which Herrera refers to as “last responders.” Not only are they overwhelmed with bodies, but some of their staffs have contracted the coronavirus and must take off work. Those remaining often have to deal with overtime and the fear of contracting the virus themselves.

“We find ourselves in a new realm of possible exposure and are particularly vulnerable by the sudden tsunami of COVID-19 deaths,” Herrera said. “We’ve seen firsthand witnessing how the COVID-19 pandemic has transformed the local medical and death care landscape unlike anything seen before.”

Herrera said he stands with his colleagues in the death care field. He contends they should also be prioritized, along with health care workers and nursing home staffs, for the coronavirus vaccine.

Recently, aided by a letter he wrote to L.A. County Supervisor Hilda Solis, Herrera said those in the death care industry have been added to the first phase to get much-coveted inoculations.

“What about the silent, undervalued ‘last responders’ who perform a special service to society?” Herrera asked. “The proud and dedicated people employed in the 1,100 funeral homes in the state of California. We confront the stark realities of death 24-7 and adapt as best we can.”