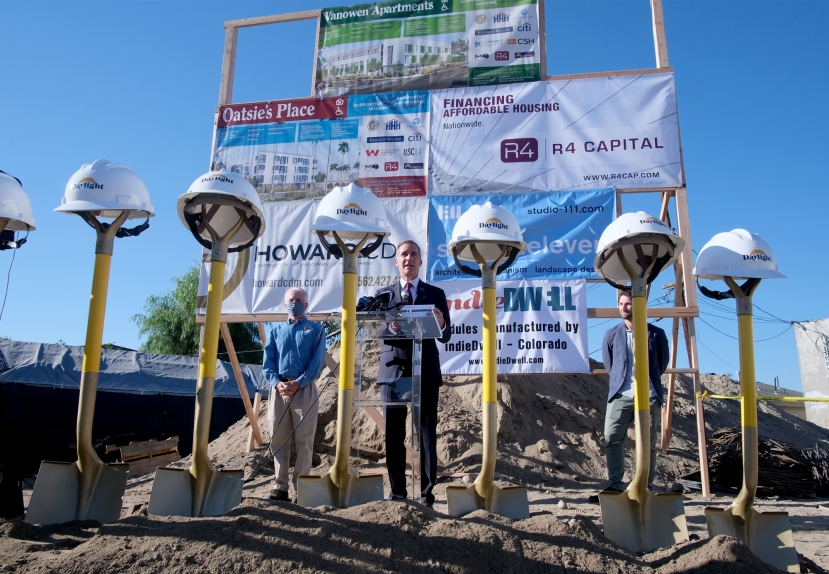 The Vanowen Apartments, 11604 Vanowen St., will cost about $21 million to build, with the project expected to be ready for residents in late 2022. It’s the first project developed through the city’s Proposition HHH Housing Innovation Challenge, which awarded funds to six teams to test innovative construction and financing methods to reduce the high production cost and timeline for Proposition HHH projects.

Voters in November 2016 passed Proposition HHH to use $1.2 billion to build 10,000 units for homeless Angelenos, with the goal of more than tripling Los Angeles’ annual production of supportive housing.

“Through Proposition HHH, we have created thousands of new supportive housing units, exceeding our goal of 1,000 per year by 50 percent,” said Mayor Eric Garcetti. “With every new groundbreaking and ribbon cutting, we welcome home Angelenos who have been living on the streets for far too long and set them on a path to a better future.”

“In the last 16 months, we have added hundreds of bridge housing beds in my district, including three tiny home villages,” said Councilman Paul Krekorian, who represents North Hollywood. “With 49 units of permanent supportive housing, the Vanowen Apartments represent an important expansion of the housing stock in CD2. This project, which was funded by Measure HHH, provides further evidence that the City is deeply committed to building safe, secure housing for our neighbors experiencing homelessness.”

The city has completed 16 Proposition HHH projects to date, making up more than 1,000 units. A total of 42 affordable and supportive housing projects have been built in L.A., accounting for 2,700 units.

On Sept. 28, the city broke ground on the largest homeless housing development in Los Angeles history. The Weingart Towers — one 19-story high-rise and one 12-story high-rise — is being built in Skid Row and will provide 382 units to people experiencing homelessness.