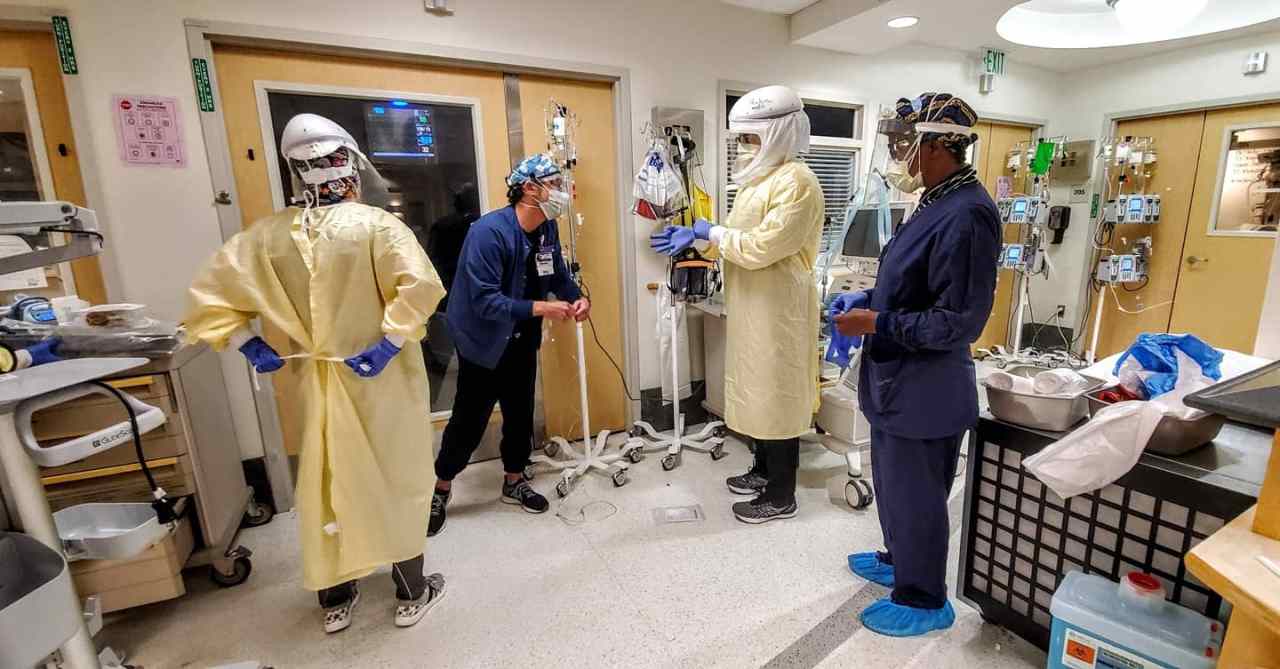 Mobile morgues housing the ultimate victims of the coronavirus.

The once-unthinkable has become an undeniable truth: Los Angeles County is facing death on a scale for which even the best medical training could not prepare you.

“We are seeing death in a completely different light,” said Lindsey Baker, an intensive-care unit nurse at Torrance’s Providence Little Company of Mary Medical Center. “Way too much, way too often.”

Over the past month, Baker said, her ICU has seen all but one of its coronavirus patients die. The on-the-ground reality there, and at nearly every other L.A. County hospital, illustrates, in heartrending fashion, the scope of suffering the daily statistics confirm and public health officials had long-vocalized as their greatest fear: That pandemic fatigue, a desire to see families over the holidays and even the persistent denial of the coronavirus as a threat would coalesce into a tragic surge of cases, hospitalizations and deaths that could overrun medical facilities.

“The most concerning is that as bad as it is,” Dr. Christina Ghaly, the county’s Health Services director, said on Monday, “the worst is almost certainly yet to come.”

Ghaly’s comments, days after Christmas and with New Year’s Eve on the horizon,  foreshadowed another potential surge in the first weeks of 2021, similar to the current spike caused by Thanksgiving.

And the county is already in a dire state.

At least 9,555 L.A. County residents have died from coronavirus-related causes since the pandemic began, though the actual death toll could be closer to 10,000 after factoring in 432 unofficial reports delayed over the Christmas weekend.

And as of Monday, Dec. 28, close to 7,200 people were hospitalized for COVID-19 in L.A. County, including 1,449 in ICUs, based on a state dashboard that reports numbers a day earlier than the county — the highest total of the pandemic.

But that total is likely not the peak.

L.A. County, as of Monday, was averaging roughly 13,000 new coronavirus cases a day. And, if past is prologue, then 10 to 12% of those cases will result in hospitalizations about two to three weeks later, with about 20% of those patients ending up in ICUs.

That means hospitals face the specter of even more coronavirus patients in the days ahead.

And the consequences of the surge have already been far reaching, from medical workers facing exhaustion to hospitals putting off some non-coronavirus procedures, from aging infrastructure being overburdened to ambulances having nowhere to put patients.

Roughly 96% of hospitals countywide, for example, diverted emergency patients to other facilities at some point on Saturday due to overcrowding in emergency rooms, Gov. Gavin Newsom said Monday. On average, hospitals had to divert emergency patients — meaning they did not have room for them —  for 16 hours that day. And those hospitals, Ghaly said, have had similar diversion rates every day of the week.

“There are many situations where as many as 10 ambulances are waiting to offload patients,” Ghaly said. “They are being treated in the ambulance as if it’s part of the emergency bay.”

At some hospitals, due to aging infrastructure, front-line care teams have struggled to deliver enough oxygen to patients who need help breathing, Ghaly said. To cope, patients were moved to lower floors, where the strain on pipes would be less.

Still, not being able to provide patients with oxygen could be a catastrophic problem — since COVID-19 is a respiratory disease.

“With the vastly high amounts of patients on high flow oxygen,” Ghaly said, “they are not able to maintain the pressure in the pipes to deliver oxygen at that high level that’s required.”

And while the county’s supply of ventilators and personal protective equipment remain strong, questions keep growing about where hospitals will put the former — and who will wear the latter.

About half of the county’s staffed beds and two-thirds of staffed ICU beds were now filled with COVID-19 patients, Ghaly said. And many facilities, like Los Alamitos and Lakewood regional medical centers, have been at ICU capacity for days. Some facilities, Ghaly said, have had to set up beds in gift shops and conference rooms.

L.A. County, for its part, has begun using its emergency medical management system to assess the needs of hospitals and coordinate resources — chief among them staffing.

Hospitals throughout the region, in fact, have requested additional staff, though few have actually received it.

But county officials have been able to deploy 415 nurses from outpatient settings into hospitals. In some cases, they have helped to quarantine and isolate individuals.

The state, meanwhile, was sending support teams to L.A. County, now among the hardest hit regions in the nation, Newsom said. The teams will help hospitals work together to transfer patients from those most severely impacted to those with fewer demands.

So far, the state has deployed 1,028 staff members to 116 facilities statewide.

Newsom, on Monday, also reiterated that those with non-coronavirus related health problems could face consequences, too, as hospitals get overwhelmed. Particularly those at smaller, rural hospitals.

One such facility is Antelope Valley Hospital.

The hospital, Lancaster Mayor Rex Parris said, was drastically understaffed and medical workers were suffering from exhaustion due to the influx of patients, some of whom were  being treated in tents outside.

Some help, though, has arrived.

Additional nurses, emergency medical technicians and respiratory doctors from the California Emergency Medical Services Authority arrived at the hospital on Monday, according to the city of Lancaster.

“We recognize our community is already experiencing hardship,” Parris said. “We are doing everything we can to ensure that the hospital and the community are supported.”

But no matter the aid hospitals receive, the dead bodies keep piling up.

Take, for example, the situation at Providence Little Company.

“It’s far worse than the media has been able to portray simply because they cannot come into the ICU or emergency department and see what we are seeing,” Baker said, “which is nothing short of extreme devastation.”

Baker, who has been telling her story to whomever will listen, spoke most recently on a Facebook Live interview with Redondo Beach Mayor Bill Brand.

ICU nurses, Baker said during the interview last week, have been working under extreme conditions, spending entire days donned in PPE gear, often going hours or even an entire shift without drinking water or using the restroom.

“It used to be we could compartmentalize our COVID patients into a couple units,” Baker said. “With this, we are all COVID. You are never truly safe anywhere on the floor so you have to be prepared.”

During one two-day period, Baker said, six people died. Whole families have become seriously ill. A sister and brother were together in the ICU but didn’t know it. A mother and son as well. The deaths become harder to cope with.

“Every one of them,” Baker said, “hits me harder than the one before.”

The Torrance hospital has even brought in a mobile morgue to hold remains, as nearby funeral homes can’t keep up with the death toll.

And Little Company is not alone.

Multiple facilities around the county have brought in mobile morgues, including Long Beach Medical Center.

“We have had to begin using (the mobile morgue),” said spokesperson Richele Steele. “We also have ordered a second mobile unit as a precaution.”

And, people like Ghaly and Baker have warned, the worst may still be on its way — if people don’t listen to public health guidelines. If they gather with friends and family. If they ignore social distancing. If they scoff at masks.

If, Baker said, they think it can’t happen to them.

While the majority of people who have died have been 60 years of age or older, the coronavirus does have the potential to kill the young and otherwise health. That includes, Baker said, a young mother who was in her care.

“COVID doesn’t care how old you are now,” Baker said.

“COVID does not care,” she reiterated. “This is a very smart virus.”