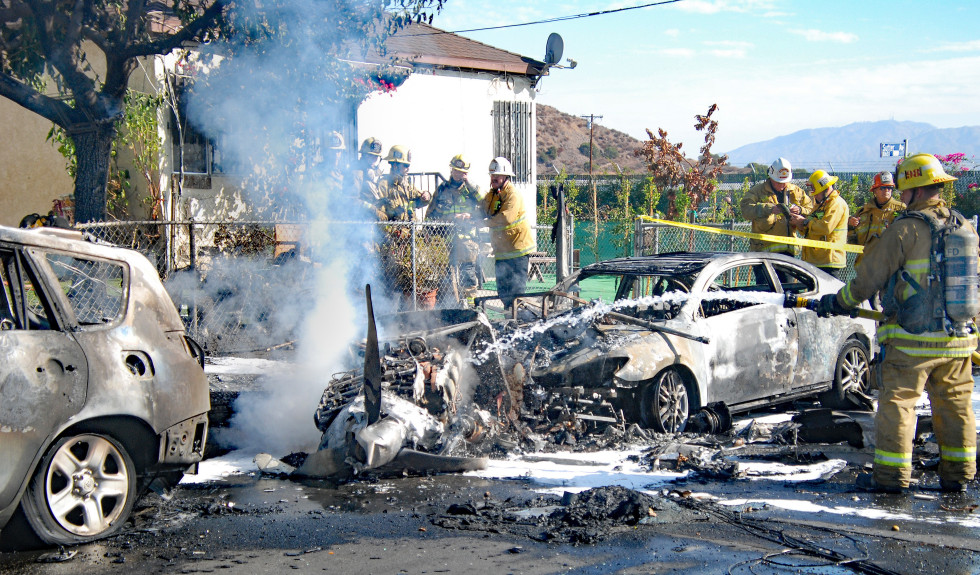 The plane crashed a few hundred feet short of the runway in front of several homes, knocking down power lines, and the flames spread to trees and vegetation. But firefighters prevented the flames from spreading to the structures.

The pilot was the only person on board, Gregor said. The Los Angeles Fire Department confirmed that the pilot died. No other injuries were reported.

Radio traffic between the pilot and control tower indicated that the plane was malfunctioning.

“Whiteman Tower CAP439 – We’ve got a loss of engine power, we’re going to try and stretch it to the runway,” the pilot said.

The pilot then said: “Well, hopefully, we’ll make it.”

A Civil Air Patrol volunteer at Whiteman Airport who asked that his name not be published confirmed that the plane is owned by that organization and that the pilot was a member. The aircraft was en route to Pacoima from Bakersfield, the volunteer said.

FAA records show that the single-engine aircraft was registered to the Civil Air Patrol and was manufactured in 2015.

The Civil Air Patrol was created in 1936 and is the auxiliary of the U.S. Air Force. It is assigned three missions: Emergency services, which includes search-and-rescue and disaster relief; aerospace education for the public; and cadet programs for teenagers. Its 60,000 members are volunteers, according to its website.

The FAA and National Transportation Safety Board will investigate, with the NTSB announcing the probable cause of the crash. Such investigations often take months.

The airport has two runways and averages 318 takeoffs and landings each day, according to its website. Some 230 aircraft are based at the airport.