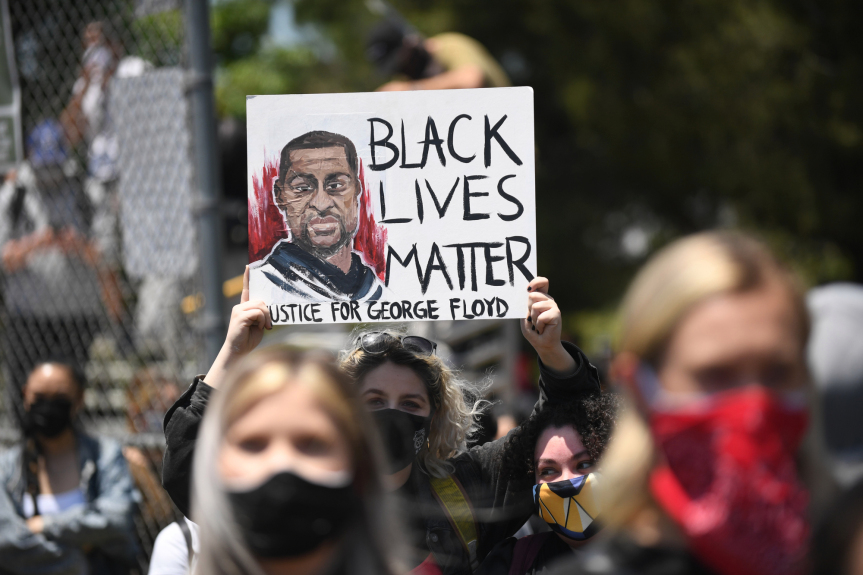 Hours after a jury in Minneapolis convicted former police officer Derek Chauvin of murder and manslaughter in the death of George Floyd, African American activists and faith leaders across Southern California expressed relief and shared their hopes to continue the fight for racial equality and justice.

As community leaders processed the verdict Tuesday afternoon, April 20, they said they realized the magnitude of the verdict, but also that much remains to be done.

“It’s a major, but minor victory,” said the Rev. Samuel J. Casey, executive director of Congregations Organized for Prophetic Engagement in San Bernardino. “We still have a very flawed and broken justice system. Today was a testament to voices standing up against injustice. We should also never forget the roll call of Black lives that have been lost over the years to police brutality. Today was just one small step toward justice.”

For those in the community who took to the streets last summer to protest Floyd’s killing, this feels like a “strange victory,” said Alesia Robinson, a Costa Mesa resident who joined Black Lives Matter rallies and is part of the OC Protests Community Coalition.

“Yes, this is a victory, but this is also the bare minimum,” she said Tuesday. “We shouldn’t have had to protest to get this result. It was the right thing to happen. My hope is that this case serves as an example to let people know you can’t mess with our lives any more. I hope Chauvin serves as an example for law enforcement that they will be held accountable. The world is watching.”

The victory is a watershed moment in part because of the unprecedented courtroom condemnation of a police officer by so many high-ranking officials from his own department, said the Rev. Gary Bernard Williams, who leads St. Mark United Methodist Church in South Los Angeles.

“It looks like police officers are finally crossing that thin blue line, and that’s a big deal,” Williams said.

One guilty verdict is “not going to make everything better,” he added. But it does relay that some semblance of justice is possible. It also energizes activists on the ground and gives them the strength to persevere.

“As for the rest of us, we can’t afford to fall asleep, not now,” Williams said. “We need to be on the front lines with the activists.”

What moved the needle toward justice was the show of solidarity from White Americans after Floyd’s death, said Shandell Maxwell, a Riverside community activist who also manages the legacy of the Tougaloo Nine, a group of African American students at Tougaloo College who participated in civil disobedience by staging sit-ins of segregated public institutions in Mississippi in 1961.

“White people are more aware and more engaged than ever before and this case induced a sense of empathy,” she said. “People who weren’t aware of what was happening to Black people have now become hyperaware. Even though we are divided as a nation, we’ve been more united around the Black Lives Matter cause than any other (after Floyd’s killing). And that’s made a huge difference.”

Tuesday’s verdict is an “acknowledgement that we cannot turn away from this issue,” said Tinisch Hollins, executive director of Californians for Safety and Justice, a nonprofit that promotes criminal justice reform.

“For once, the justice system was responsive,” Hollins said. “But there are many cases that continue to happen, including the case of Daunte Wright who was shot by police in the same city where this trial was taking place.”

In Daly City in Northern California where Hollins resides, Roger Allen, a 44-year-old Black man was shot and killed by police on April 7. Hollins said it barely made national news.

Some believe this might be the right moment for a divided nation to begin to heal and work toward reconciliation.

“It’s a good day today and the right thing happened,” said the Rev. Chineta Goodjoin, who leads New Hope Presbyterian Church in Anaheim, a predominantly African American congregation. “This hopefully becomes the point at which we can begin to hear each other. Now, we can begin to have some conversations that will lead us into greater empathy and understanding of the pains all of us have suffered.”

The day was rife with emotion for many African American community members who must unpack their own internal trauma as Black people in the U.S., said Derric Johnson, vice president of the Los Angeles Human Relations Commission and founding director at the Equity and Justice Institute at Crossroads School for Arts and Sciences in Santa Monica.

“All I’m left thinking about today is 9 minutes and 29 seconds,” he said, referencing the length of time authorities say Chauvin held a knee pressed to Floyd’s neck before he died on May 25.

“It still dawns on me that we’re talking about the loss of a human being,” Johnson said. “This verdict doesn’t change the outcome of what happened that day.”

Floyd’s death exposed the “asymmetrical power dynamics in this country that have allowed law enforcement to operate without accountability,” he said.

“I hope that moving forward, communities are able to define their own agency and articulate what their needs for public safety are instead of having mandated structures that folks feel terrorized by,” Johnson added. “We just need to build a new normal that prioritizes human dignity and repairs the damage done by these practices.”

Johnson said he struggles with the idea of reconciliation without systemic changes.

“We’re talking about centuries of trauma and oppression and segregation,” he said. “This is just one case. How many other cases have ended with ‘not guilty’ verdicts? How many story lines do we not even know about? I don’t know how we get to a place of reconciliation when systems are still operating in a certain manner. These systems need to be right-sized and course-corrected before we can have that conversation about reconciliation.”