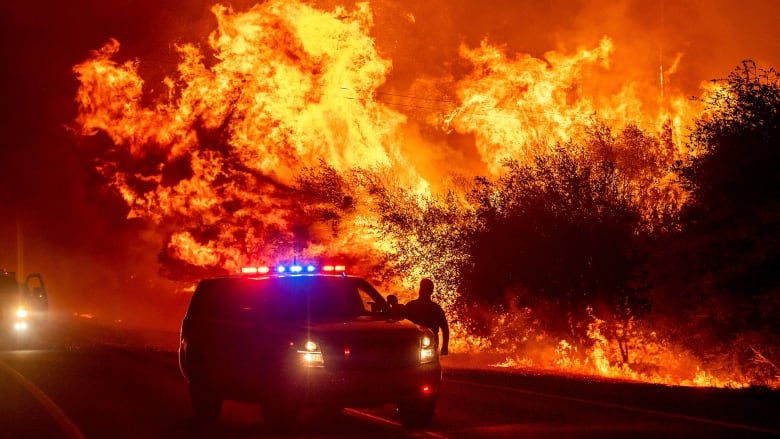 When it comes to California wildfires, it now takes days, not decades, to produce what had been seen as a once-in-a-lifetime occurrence.

Last weekend, a fire burning in California’s Sierra National Forest exploded in size, trapping hundreds of Labor Day holiday campers who could only be rescued by helicopters that made a series of white-knuckle flights into the smoke. Fire officials said they’d never seen a fire move so fast in forestland — 24 kilometres in a day.

On Wednesday, a wildfire in Plumas National Forest northeast of San Francisco spread 40 kilometres in a day and devoured an estimated 1,036 square kilometres.

In between those events, a massive fire in Monterey County doubled in size overnight, trapping 14 firefighters who had to deploy their emergency shelters; one was critically injured.

They are only the latest examples of what a half-dozen fire experts agreed is more extreme fire behaviour driven by drought and warming temperatures they attribute to climate change. Among the most concerning developments is that fast-moving wildfires leave less time for warnings or evacuations.

Recently “we have seen multiple fires expand by tens of thousands of acres in a matter of hours, and 30 years or more ago that just wasn’t fire behaviour that we saw,” said Jacob Bendix, a professor of geography and the environment at Syracuse University who studies wildfires.

Mike Flannigan, who directs the Western Partnership for Wildland Fire Science at Canada’s University of Alberta, remembers the first report of a fire-created thunderstorm in 1986.

“They were rare events, and now they’ve become commonplace,” he said. “It’s because these fires are higher intensity.”

A prime example is the Creek Fire, which exploded through miles of drought- and beetle-killed timber, moving so fast that it trapped hundreds of campers in Sierra National Forest south of Yosemite National Park.

No model to predict this kind of fire behaviour

“When you have a fire run 15 miles [24 kilometres] in one day, in one afternoon, there’s no model that can predict that,” U.S. Forest Service forester Steve Lohr said. “The fires are behaving in such a way that we’ve not seen.”

The phenomenon isn’t restricted to California. Doug Grafe, chief of Fire Protection at the Oregon Department of Forestry, said it was unprecedented in his state for fires to spread from the crest of the Cascade Mountains into the valleys below, and so quickly, “carrying tens of miles in one period of an afternoon and not slowing down in the evening — (there is) absolutely no context for that in this environment.”

California already has seen a record 1 million hectares burn and it’s only now is entering what traditionally is the most dangerous time for fires. Labor Day weekend brought record-breaking temperatures across the state that exacerbated what already are drought conditions in a large swath of the state.

University of Colorado-Boulder professor Jennifer Balch said measurements of how quickly the hot, dry air is sucking moisture out of fuels are “the highest seen in at least four decades” across major parts of the West.

The abundant dry tinder produces more heat energy, which in turn super-heats the air so it becomes more buoyant and creates a strong updraft that condenses with the smoke plume, “creating its own wind to feed that thunderstorm,” Flannigan said.

The cloud itself is called a pyro-cumulonimbus, which may or may not produce lightning, and strong winds that can pick up burning embers and ignite new fires far in front of the initial blaze.

An extreme example in July 2018 spun off what was then only the second documented “firenado,” killing a firefighter as he helped evacuate residents from the Carr Fire in the Northern California city of Redding.

Yet just this month a fire north of Lake Tahoe spun off at least two and as many as four firenadoes, while the Plumas National Forest fire appears to have produced “a handful” overnight Tuesday, said Neil Lareau, a professor of atmospheric science at the University of Nevada, Reno.

The Creek Fire produced at least two firenadoes that appeared to touch down Saturday, he said, one straddling an access road to a popular campground at Mammoth Pool Reservoir where 214 people became trapped.

“It’s really kind of a testament to the remarkable extremes that we’re seeing right now,” Lareau said. “It really is kind of this vicious cycle that it gets into, and that’s when the fire really takes off and becomes these unstoppable infernos.”

Two California National Guard helicopters called in to rescue the trapped campers Saturday night found visibility deteriorating so swiftly that the crews opted to load their aircraft “to the absolute maximum” and well beyond normal safety limits in an unprecedented mission.

On one trip, Chief Warrant Officer 5 Joseph Rosamond and his three-member crew took on 102 desperate campers in a CH-47 Chinook twin-rotor helicopter designed for 30 passengers. A UH-60 Black Hawk ferried 22 evacuees in a helicopter with a normal operating capacity of 11 or 12 passengers.

“It was an absolute emergency and people’s lives were at stake,” Rosamond recalled. “It was pretty dicey. The charts don’t go that high.”

Such harrowing escapes are only likely to become more common, the experts said.

Columbia University’s Williams said California’s record heat and record acreage burned already this year are part of a trend that has been accelerating for 50 years due to global warming.

“So, while the magnitudes of the current heat wave and the resultant wildfires have been shocking, they’re consistent with what scientists have been predicting for decades,” Williams said in an email.