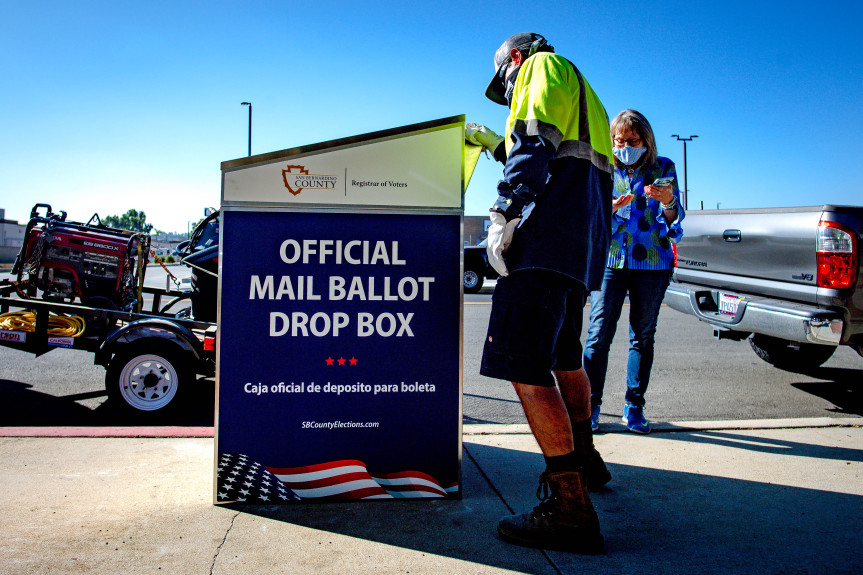 The state issued cease and desist orders to the California Republican Party and local GOP officials in Orange, Los Angeles and Fresno counties over the use of unauthorized ballot drop boxes, Secretary of State Alex Padilla and Attorney General Xavier Becerra said Monday.

Republicans have until Thursday, Oct. 15 to remove the drop boxes, which Padilla said are not legal. Otherwise, he said his office will “consider all of our legal options,” which could include both civil and criminal charges that can carry felony penalties of up to four years in prison.

Republicans are responding by concurrently slamming California’s permissive ballot collection laws and also claiming protection under that law. Officials with state and local GOP groups argue that Democrats are trying to suppress GOP votes by limiting so-called “ballot harvesting,” where people can turn in ballots for other registered voters, when the controversial law doesn’t work in their favor.

“Are we really supposed to believe it’s fine for paid Democrat operatives to collect ballots from strangers and throw them in a bag, but churches aren’t allowed to collect them for members of their congregation and put them in a box?” Rep. Ken Calvert, R-Corona, said Monday.

But elections officials and legal experts say unauthorized drop boxes are not covered by ballot collection laws, with distinct differences between the two processes.

One box in Leisure World Seal Beach appeared to be cardboard and was covered in red paper and set on a table under a red tent. A sign hung on the box read “Ballot drop box, sponsored by: LW Republican Club.,” according to a photo a reader sent the Register on Monday.

But Becerra said he’s heard what he termed “disturbing” reports about GOP officials saying they don’t intend to comply with the removal orders.

The California Republican Party didn’t respond to repeated requests to discuss details, but continues to argue that it believes unofficial drop boxes are legally allowed under state election laws.

Ballot collecting was legalized four years ago in California, with the passage of Assembly Bill 1921. The law allows anyone to collect absentee or mail-in ballots from voters and then drop those ballots into a mail box or polling place. Election officials then check ballot signatures against the voter’s signature on record. And voters can electronically track their ballot throughout the entire process.

Some version of that process is legal in most states, but California’s ballot collection rules are among the most permissive in the nation. While collectors can’t fill out ballots for voters, tamper with them or be paid based on the number of ballots they collect, there are no restrictions on who can gather ballots or how many they can pick up.

Republicans are arguing that putting out a collection box is no different than someone going around collecting ballots by hand.

“I understand what they’re saying, which is ‘Don’t the filing cabinets essentially just double as a bag?’” acknowledged Jessica Levinson, a Loyola Law School professor who specializes in elections.

But Levinson said she believes there are clear distinctions governing the two processes. And she doesn’t believe the GOP’s argument is legally valid.

Voters can make a choice to sign their ballot over to an individual, Levinson said, noting that the person collecting ballots must turn them in within three days. Also, people collecting ballots for others are encouraged to sign the ballot envelope to show chain of custody. Or, Levinson said, voters can leave their ballot in an official drop box, which are governed by their own strict set of laws.

The California GOP didn’t answer questions about what’s happening with any ballots already collected through the banned process.

Kelley didn’t know if any unauthorized boxes had ballots deposited in them. He also said he would have no way to tell how ballots had been collected when they arrive at his office.

Regardless, Kelley said, ballots collected in a questionable manner would not be thrown out. His procedure is to notify the voter, “just to verify that they, in fact, designated their ballots to be picked up by somebody else,” he said.

“We’re not going to penalize the voter.”

Before this incident, there was no evidence that ballot collecting had been tied to fraud in California. Earlier this year, in North Carolina — where all ballot harvesting is illegal — a political operative working for Republican candidate Mark Harris was indicted on charges that during the 2018 midterm election he took absentee ballots and destroyed or changed them.

Democrats and election observers say they’re worried about how the drop box incident might dampen voter turnout and cast doubt about election results. With lingering questions about the reliability of the U.S. Postal Service and concerns about safely voting in person during the pandemic, Levinson said state-sanctioned drop boxes were supposed to provide a safe alternative to mail-in or in-person voting.

“This just undermines the system at the worst possible time,” she said.

To find official drop box locations near you, use tools on the Secretary of State or your local registrar’s websites.