California man loses most of his fingers to coronavirus, urges people to take COVID-19 seriously 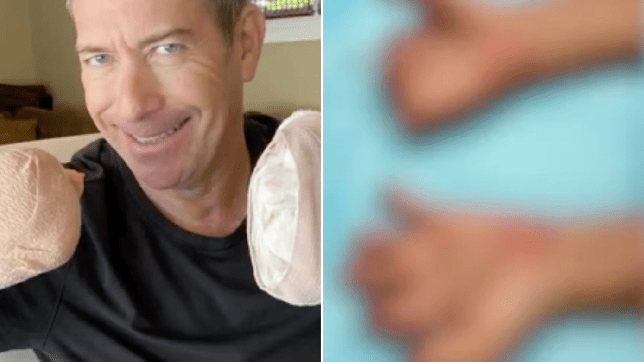 A California man who spent 64 days in the hospital battling COVID-19 is happy to be alive – even without most of his fingers.

Gregg Garfield, 54, said he had a 1% chance of survival, given his 31 days on a ventilator.

“Medically speaking, I shouldn’t be here,” he told KTLA-TV on Friday.

“My immune system just ate me alive,” Garfield told KCBS-TV upon being released in early May.

As more and more symptoms and complications of coronavirus infection emerge, vascular issues such as stroke, COVID toes, and in at least one case, another blood flow issue entirely are pointing toward the virus’ effect on the inside of a person’s blood vessels.

“COVID has effects on the endovascular bloodstream, so it actually affects the blood flow,” Dr. David Kulber of Cedars Sinai Medical Center in Los Angeles told KTLA. “That’s why some young people have had strokes, and that’s why anticoagulation — putting patients on blood thinners — now has been a standard cure for COVID patients.”

Garfield contracted the disease along with a dozen friends in February, while on a skiing trip to Italy just before the pandemic exploded there. He and his group started coming down with what they would later learn was coronavirus.

“Three days into the trip, a few people started getting sick,” traveling companion Brett Lightner told KABC-TV in May. “By the end of the trip everybody was sick. None of us knew we had coronavirus.”

Garfield arrived at Providence St. Joseph Medical Center a few days after returning home, was admitted and became “Patient Zero,” he told KCBS. Within 48 hours he was put on a ventilator, where he would remain for the next month.

During that time, any one of a number of complications could have killed him: “from MRSA, to sepsis, to kidney failure, to liver failure, pulmonary embolisms, burst lungs — four of them,” he told KTLA.

A good 70% of those put on ventilators don’t make it, pulmonologist Dr. Daniel Dea at Providence St. Joseph told KTLA.

Garfield faces at least half a dozen surgeries to reconstruct his fingers with prosthetics, KTLA said. And he had a message for those who would doubt the seriousness of the disease or the wisdom of masks.

“I’ve survived this. I’m doing fantastic,” Garfield told viewers via KTLA. “However, take heed on this. My hands are never going to be the same. I don’t have fingers anymore. This can happen to you.”