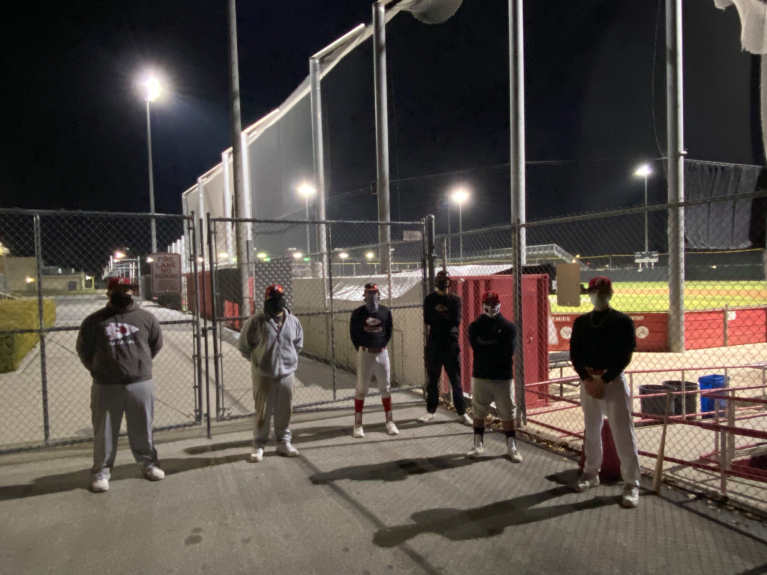 Senior baseball players at John Burroughs High practiced for the first time Monday night after serving a two-week suspension for a senior photo taken outside the school with no facial masks on. The Burbank Unified School District suspended the team for one week, and the eight seniors in the photo for two weeks.

Superintendent Matt Hill said the photos were “a violation of health orders (no masks, no social distancing, and mixing of families).”

As if the wait wasn’t long enough – due to the COVID-19 pandemic that’s erased nearly a full year of athletics – these seniors had to wait an additional two weeks to get back onto the field after the state’s health guidance for youth sports allowed for outdoor competition to begin January 26.

Finally, the players could feel the leather of their gloves, the grass underneath their cleats, and the sound of the bat echoing throughout campus.

“It feels good to be back,” senior Tyler Schrefel said.

While the seniors were home serving their suspension, other teams in the area were practicing, even scrimmaging other schools.

“We have a game in a few days, it sets us back,” senior Rory Freck said. “We’re way behind.”

It was a hefty first practice under new coach Matt Magallon. The players got started at 5:45 p.m. and walked off the field at 8:30 p.m..

The energy was high, the chatter was loud and the ball was zipping through the air. Even so, it was hard for James Turner not to think about the best parts of being a senior that he won’t experience.

“It’s great to get back on the baseball field and see everybody,” Turner said. “But prom is something every kid looks forward to in high school. It’s hard not to think about the things you’ll probably never get back.”

Joshua Lucero said while he was at home, all he kept hearing was that Pacific League foe Arcadia was already practicing. He didn’t like that.

“That’s a team we all want to beat,” said Lucero. “Each day is important to get better. I felt like those days were taken, keeping us from getting better. Meanwhile, Arcadia is creating a larger advantage.”

The whole team was practicing in masks Monday. The coaches were diligent about reminding players to stay six feet apart as much as possible. Even after practice, as the players were packing away equipment, they kept their distance from each other.

“What’s done is done, it sucked. I thought it was unjust,” Freck said of the suspension. “But, life is starting to get back to normal, that’s exciting. Now baseball is adding onto it. It feels great. There’s hope in the future.”