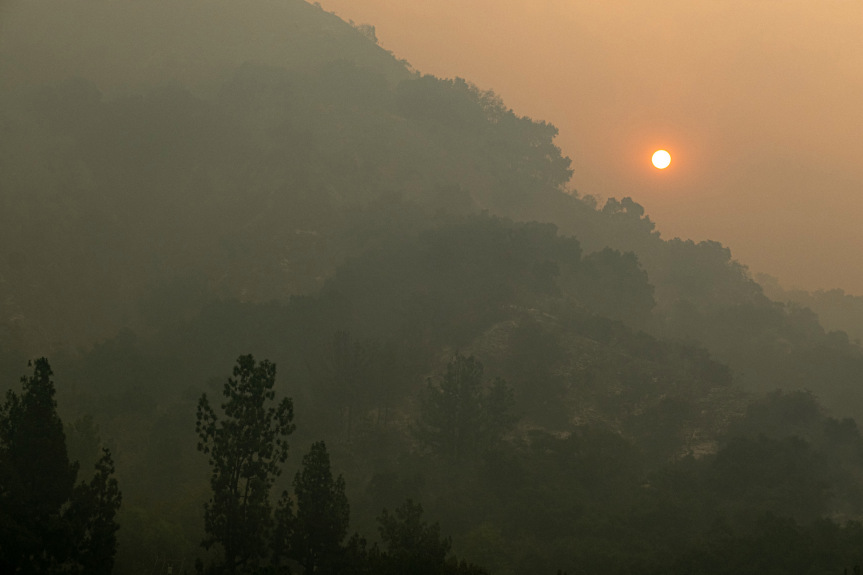 The Bobcat fire raging for the ninth day in the San Gabriel Mountains north of Azusa continued to grow Monday while fire authorities said it likely will take longer than originally expected for their crews to get the blaze fully contained.

By early Monday, Sept. 14, the blaze had charred 36,366 acres, according to the U.S. Forest Service. Containment remained unchanged from the previous night, sitting at 6%.

Forest Service authorities had previously estimated the fire would be contained by Oct. 15 but on Monday pushed that date to Oct. 30.

The fire started on Sept. 6 near the Cogswell Dam and West Fork Day Use area and is one of a dozen burning throughout California, causing orange skies, smoky air and smoke advisories in Southern California.

Fire officials said the focus of the day would be to strengthening the fire line between the south end of the fire and the foothill communities.

MAP: Where the Bobcat fire is burning in the San Gabriel Mountains

On Sunday, residents in Arcadia and Sierra Madre who live in the area north of Elkins Avenue and east of Santa Anita Avenue were ordered to evacuate while firefighters worked to keep the flames from threatening other populated areas.

Around 305 homes were in the evacuation zone, a Angeles National Forest spokesman said Sunday. Most of them are in Arcadia, and 32 were in Sierra Madre, officials said.

Sierra Madre city officials said Monday afternoon that they did not have an estimated time of when residents would be allowed to return home.

“Re-population of the evacuated area will be based on the current and projected status of the Bobcat Fire, including a review of the effectiveness of the perimeter lines which have been put in place to hold the fire,” the city said in a statement.

“All other areas of Sierra Madre remain under an evacuation warning. Residents need to be ready to evacuate should an evacuation order be issued.”

In Arcadia, the fire made its way into the Chantry Flat area and approached the Wilderness Park, city officials said.

“Although the fire burned the hillside above the park, the park was not damaged. No structures in Arcadia have been impacted,” the city said Monday morning.

Arcadia police were doing patrols of the mandatory evacuation area.

A Red Cross evacuation center was established at the Santa Anita Race Track, at 285 W. Huntington Drive in Arcadia, where displaced residents can go.

“The fire has crossed to the west side of Santa Anita Canyon and is growing in the direction of Mt. Wilson and Mt. Harvard and continued line construction and strategic firing will be occurring in this area as well,” the Forest Service said in a Monday morning statement.

The blaze reached Bear Creek on the north end and was expected to continue to spread west along the crest, the agency added.

The virtual meeting, via Zoom, will include fire management who will be giving an update and responding to questions, authorities said. Information for how to log into the meeting will be shared on social media by the Angeles National Forest or the fire