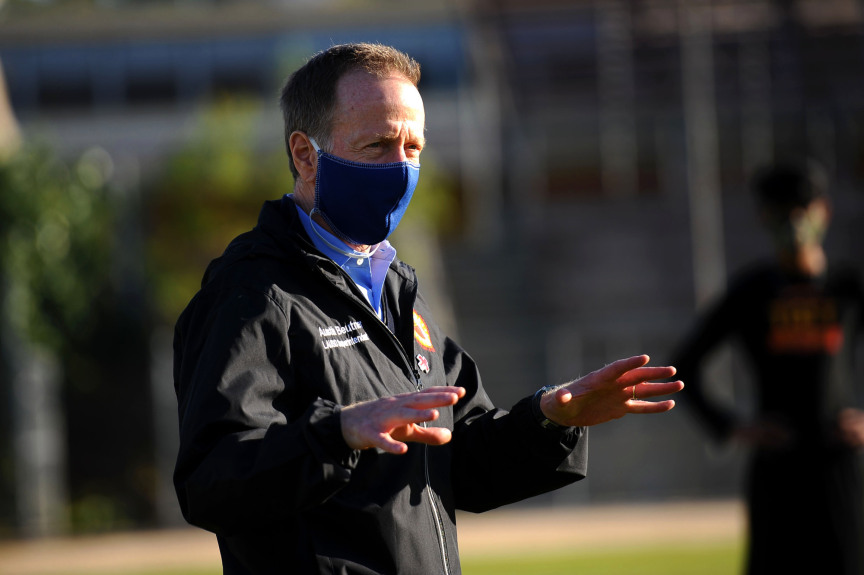 Beutner announced the resumption of practices and competitions for outdoor high school sports, including football, baseball and track and field.

“The resumption of school sports is another step in the path to recovery for all in the school community,” Beutner said in a press release. “After careful consideration, we have also decided to extend participation in sports to allow students to participate in California Interscholastic Federation Season 1 and Season 2 practices and competitions.”

In early November, Beutner visited Taft High for the first athletic activity (conditioning) on a LAUSD campus since COVID-19 shut down all sports activities in March 2020. That day he said he “could not see a scenario where students are not in school, but are allowed to compete.”

Classrooms are still closed, but the LAUSD changed its policy on athletics Wednesday.

“Allowing students to resume athletic competition is not a decision we made lightly,” Beutner said. “The spread of the virus is still categorized as widespread in Los Angeles County. At the same time, the opportunity for young adults to be with friends and teammates while participating in a sport might help ease the anxiety and isolation many are feeling.”

The LAUSD policy change came after the California Department of Public Health updated its youth sports guidelines two weeks ago, which led to most other Southern California school districts allowing the return of  outdoor athletics.

Los Angeles City Section commissioner Vicky Lagos, who is in charge of governing LAUSD athletics, was delighted with the decision. Until Wednesday, it appeared that only the four independent charter schools in the district would be able to participate in athletics this spring.

“I’m excited for the student-athletes,” Lagos said. “They’ve been waiting a long time for this.”

Though the district has given a green light for sports to start up, it is still up to each school and administration to decide which sports will be allowed to compete.

The district instructs: “Athletes, coaches and trainers must adhere to strict health and safety protocols which include appropriate protective equipment, masks, social distancing and informed consent by a student’s parent or guardian. Participation in weekly COVID testing is also required for all who are involved in sports.”

The CDPH’s updated youth sports guidelines permit outdoor competition if a county’s COVID-19 adjusted case rate reaches 14 or lower per 100,000. When Los Angeles County’s case rate dropped to 12.3 on Feb. 23, that allowed for practices and competitions to begin throughout the county, but the LAUSD didn’t immediately align with the new guidelines.

“This is a great day for our student-athletes and coaches as we take steps towards returning to normalcy,” North Hollywood High athletic director Ken Harris said. “Everyone involved will still need to continue doing their part for this to work.”

Banning football coach Raymond Grajeda said his players had been waiting for months to hear the news that they could play this year.

“I just want them to get out and get some experience,” Grajeda said. “Even if it is one game, I would like to get it in.”