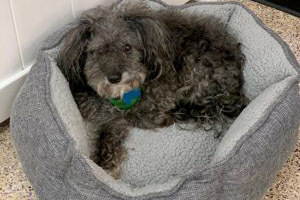 The Good Samaritan was mad. Whoever owned this dog he had just rescued from a busy freeway onramp in South Central Los Angeles obviously didn’t care about the dog to let him run free like this.

He had been looking for an animal shelter to take the dog to for over an hour, but all the city and county shelters were closed because of COVID-19. Then, he remembered a friend telling him about a nonprofit organization called the Bark Avenue Foundation. It wasn’t a shelter but it did health care, and free spay and neutering for dogs owned by many low-income families in the area.

“I hope you don’t give him back to the owner,” the Good Samaritan said to Melanie Pozez, founder of Bark Avenue. “Some people just don’t take care of their dogs.”

True, some people don’t, but not this owner, she thought. His fur was dirty, but it wasn’t matted. Someone had been grooming him. He had a collar with his name on it, and his behavior was very social. No, the Good Samaritan was wrong. This dog hadn’t been neglected. Somebody loved this dog.

Less than 2 miles away, 86-year-old Francis Hansen sat in her wheelchair on her front porch, looking up and down 2nd Street, still hoping Socks would find his way home.

It had been almost a month now since her 9-year-old poodle mix had gone missing, and it was getting harder every day to keep the faith that she would see him again.

Her daughter had been caring for Socks while Francis was in the hospital getting treatment for the painful nerve damage crippling her feet. Somehow, Socks had gotten out of her house.

Francis always felt bad she couldn’t walk him or afford to give Socks the health care he needed, but she gave him plenty of love. That didn’t take a dime from her small, Social Security check.

Now, he was gone and she would give everything she owned, which wasn’t much, to have him lie at her feet again, and gently rub his soft fur back and forth across them to help ease her pain. Her own private, physical therapist.

Back at Bark Avenue, Melanie was calling the phone number on Socks collar. It was disconnected. She was not set up to care for dog’s overnight, but she knew who was.

Melanie drove Socks out to Thousand Oaks, and left him with her friend Kim Sill, who runs Shelter Hope. Like all the nonprofit shelters during this pandemic, it’s running at full capacity with all the government shelters closed.

“It’s like the wild, wild west in animal rescue right now,” Kim says. ”Rescue groups like mine are taking in the overflow.”

They scanned Socks for a chip and found one, but the voice mail on the new telephone number said the box was full. Everyday for two weeks they called and got the same message. Until one day Francis picked up the phone, and got the best news of her life. Socks was coming home.

“We wanted to have him fixed, vaccinated, and his teeth cleaned before giving him back to her,” Kim says. “Francis offered to pay, and said that no matter what, she would find the money somewhere. We told her don’t worry, we’d get Socks vetted for her.”

This week, after being gone for two months, Socks made his way back to 2nd Street in South Central Los Angeles in the back seat of Melanie’s car. The minute he saw Francis sitting on the front porch in her wheelchair, he jumped from Melanie’s arms, and ran to her — lying at her feet rubbing his soft fur against them.

Francis picked him up in her arms and began to cry. Her boy was home.

It is the wild, wild west right now for all the wonderful people at nonprofit shelters all over Los Angeles County doing the work government shelters aren’t because of COVID. We should be supporting them.

“Small nonprofits, like mine, have been carrying the weight of more animals than ever during this pandemic, and although we have not been acknowledged as essential workers we feel we are,” Kim says.

“We work from our hearts, not our minds. We’re in the trenches everyday risking our own health to help save animals, and we sure could use some public support ourselves.”

More information on both non-profits is available on line. To reach them, email pozez.melanie@gmail and kimsill123@gmail.com.

And, please, these essential workers say, microchip your dog so all the small, nonprofits in the trenches can maybe one day bring your lost dog home.