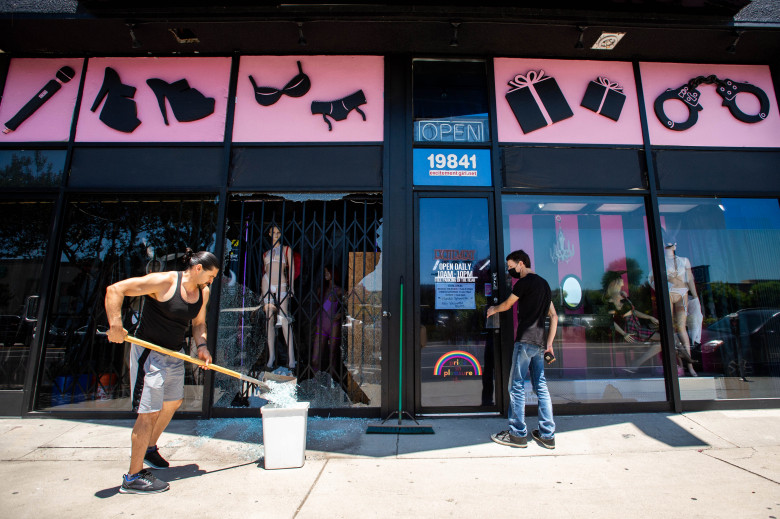 The Los Angeles Police Department said at least 19 businesses were reported to have been damaged at around 4 a.m.

By mid-morning, LAPD detectives were still investigating. Officer Jeff Lee, a department spokesman, said seven businesses were damaged in LAPD’s Topanga Division, which covers Woodland Hills. The other 12 businesses were in the West Valley Division covering Tarzana and Encino.

Officials did not give an exact block number for the businesses damaged, but they stretched from at least the 19800 block of Ventura west for about two miles. And detectives were still trying to determine if even more businesses were damaged.

“We’re combing the neighborhoods for witnesses and video,” Lee said.

He noted that damage was reported early in the morning, and that by mid-morning Wednesday many of the area’s businesses wouldn’t be open for several more hours.

“We could still have some still showing up to their businesses and getting to work who don’t know they were damaged,” Lee said. “So that number could increase.”

Earlier in the day, an LAPD spokeswoman said someone used a BB gun to shoot at the businesses as they drove by on Ventura. But officials later said they weren’t sure what weapon was used.

Bill Dellara, who owns Excitement, a lingerie and novelty store in Tarzana, was cleaning up around the front entrance of his gaudy black and pink store Wednesday morning. Glass was shattered on the ground in front of his window displays featuring scantily clad mannequins.

Other businesses in the area were also damaged — small holes from what appeared to be BBs could be seen in nearby store windows on both sides of Ventura Boulevard.

Dellara said Wednesday wasn’t the first time businesses on this stretch of Ventura had been shot at before.

Businesses in this area also had their windows shot at least once last year. He said replacing his windows previously cost between $800 and $1,500.