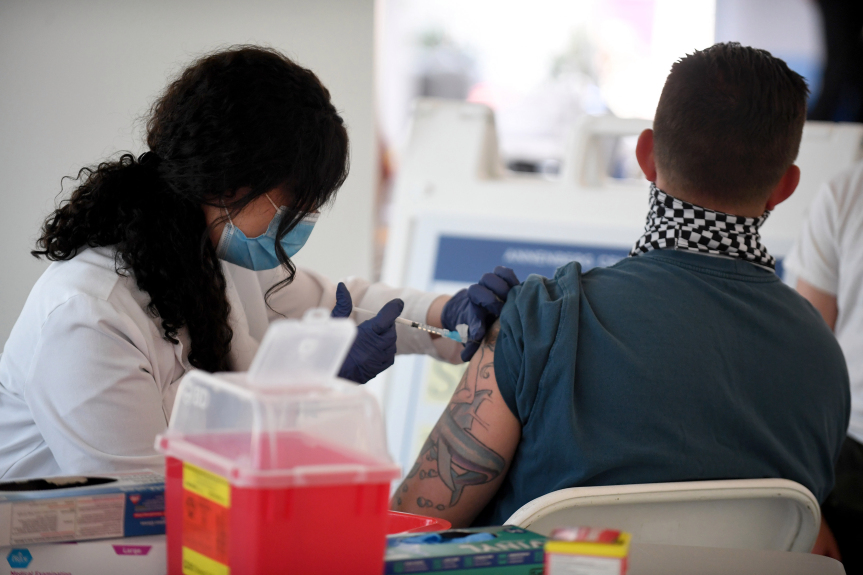 Striding into the least-restrictive yellow tier of the state’s economic-reopening blueprint, Los Angeles County will deploy its loosest business restrictions since the pandemic began on Thursday, May 6. But some rules in the county’s public health ordered will remain tougher than the state’s, including a 75% capacity cap at grocery and retail stores.

Pasadena and Long Beach were a step ahead of the county, enacting eased guidelines on Wednesday, including the reopening of indoor bars.

The county technically moved into the yellow tier Wednesday, but it will not enact revised business restrictions until Thursday. Weekly statistics released by the state Tuesday showed the county’s rate of daily new COVID-19 infections had fallen to 1.6 per 100,000 residents, down from 1.9 last week. Reaching the yellow tier of the state’s Blueprint for a Safer Economy requires a county to have a new-case rate less than 2 per 100,000 residents, and maintain that level for two consecutive weeks.

Los Angeles is the only Southern California county to advance to the yellow tier. The rest of the region remains in the slightly more restrictive orange tier.

Entering the yellow tier primarily allows higher capacity limits at most businesses. Under state guidelines being followed by the county, fitness centers, cardrooms, wineries and breweries can increase indoor attendance to 50% of capacity, up from the current 25%; bars can open indoors at 25%; outdoor venues such as Dodger Stadium can increase capacity to 67%, up from the current 33%; and amusement parks can allow 35%, up from 25%.

Restaurant capacity remains at 50% indoors, but the new restrictions allow restaurants, bars and breweries to turn on their television sets —indoors and outdoors. The new rules will also allow outdoor live entertainment at restaurants, bars, breweries and wineries.

Counties are permitted to impose tougher restrictions than the state allows, and Los Angeles County has done so occasionally during the pandemic. Public Health Director Barbara Ferrer said Monday the county would largely align with state yellow-tier guidelines, but there appears to be some exceptions.

Rules announced by the county restrict capacity at indoor museum, zoo and aquarium spaces to 75%. State guidelines have no capacity restrictions for such facilities in the yellow tier. The county is also maintaining a 75% capacity cap at grocery and retail stores, a departure from state guidelines that lift all capacity limits in the yellow tier. Hair salons, barbershops and personal care businesses are also limited to 75%, also a departure from the state rules.

Long Beach and Pasadena, both of which have their own health departments, quickly revised their local health orders and enacted eased yellow-tier restrictions effective 12:01 a.m. Wednesday. Those cities both aligned with state guidelines.

“Residents are reminded to stay diligent about COVID-19 protocols including wearing a mask in public, frequent hand washing, keeping distance from others, and staying home if you feel sick, even if you have been vaccinated,” according to the city. “The public is strongly urged to get vaccinated as soon as possible.”

Los Angeles has enjoyed a remarkable turnaround considering it was ground zero for infections and deaths when California was the nation’s epicenter of the virus outbreak just a few months ago.

“It was horrible,” John Pryor said  after one of his few outings at the recently reopened Angeleno Wine Co. near downtown LA. “It’s crazy that we were in the worst place in the country and now all of a sudden we’re the best.”

California has the lowest infection rate in the country. L.A. County, which is home to a quarter of the state’s nearly 40 million people and has endured a disproportionate number of the state’s 60,000 deaths, didn’t record a single COVID-19 death Sunday or Monday, which was likely due to incomplete weekend reporting but still noteworthy.

A total of seven of the state’s 58 counties are now in the so-called yellow tier, which is the final stage of a phased reopening plan before a projected return to business as usual June 15. The five other counties are all remote areas of Northern California.

On a map showing the status of each county, LA and San Francisco are yellow islands in a sea of orange, the second-least restrictive tier. There are 39 counties in the orange tier, home to 60% of residents. A dozen counties, mostly in the agricultural Central Valley, are in the second-strictest tier and none remain in the strictest category.

Speaking to the Board of Supervisors Tuesday, Ferrer said that despite all the good recent news, residents will need to continue adhering to basic infection-control measures. She noted that the eased restrictions “will still require safety modifications, including masking, distancing and infection control to keep reducing the risk of transmission.”

“These standard public health practices remain essential until we have many more individuals vaccinated,” she said.

Supervisor Hilda Solis echoed that sentiment, saying that while the advance to the yellow tier is encouraging, precautions are still essential.

“We still have a lot more work to do,” she said.

As of April 30, just more than 8 million doses of vaccine had been administered in Los Angeles County, including roughly 5 million first doses and 3 million second doses. Ferrer said that roughly 37% of the county’s eligible population is fully vaccinated, meaning they have received both doses of either the Pfizer or Moderna vaccine or the single-dose Johnson & Johnson vaccine. She said 65% of residents aged 65 and older are fully vaccinated.

Health officials have previously indicated that the county needs to get to an 80% vaccination rate to reach so-called “herd immunity.” But Ferrer said Monday she is less focused on that 80% figure as she is about getting accurate information out about the effectiveness of the vaccines and making it easier for people to get them.

The county on Wednesday announced 21 new COVID-19 deaths, increasing the countywide death toll since the pandemic began to 23,948.

According to state figures, there were 387 people hospitalized due to COVID in the county as of Wednesday, down from 400 on Tuesday, with 93 people in intensive care, down from 97 Tuesday.

She said “vaccine hesitancy” cannot be blamed entirely for the drop, although it does play a role. There are also issues with people having easy access to vaccination sites or an ability to get there. Mobile-vaccination efforts have been ramping up in an effort to reach more residents, and most vaccination sites are offering shots without an advance appointment.

“There are some other issues we do need to pay attention to,” she said. “People really need to have access to the kind of information they’re going to find helpful to be able to make a good decision. I’ve said all along the job of public health, we’re not sitting here ordering people to get vaccinated. We want people to feel very comfortable that the vaccines are safe and they’re super-effective.

“But we’re not here to force people to go and get vaccinated. We’re here to present a lot of information to help you see and understand how powerful these vaccines are, how much of a difference it makes.”