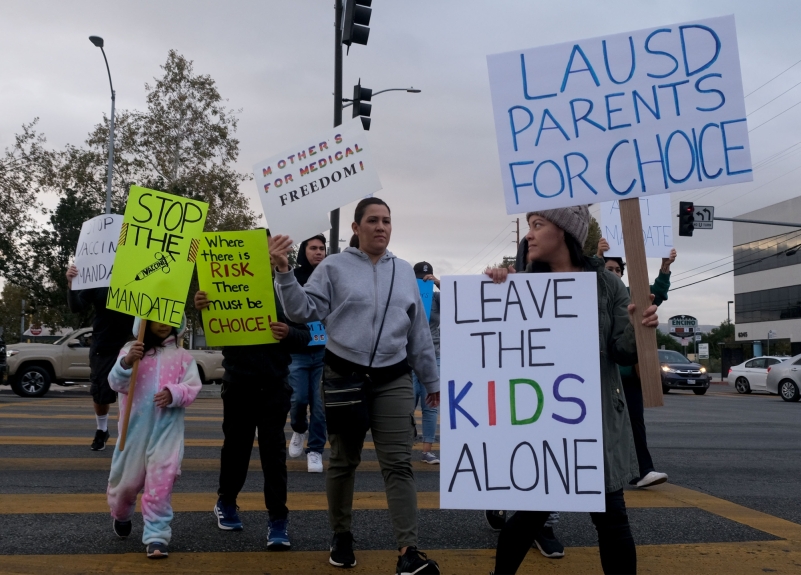 Amid debate over intensified vaccination requirements statewide, students and staff at local schools took to the streets in scattered walkouts across the region on Monday, Oct. 18, urged by parent and teacher groups pushing back on pandemic-era mandates.

The demonstrations coincided with statewide employee vaccination requirements that kick in this week, essentially leaving school employees with a choice to either get vaccinated, tested or potentially lose their jobs.

Word of possible sit-outs and other protests spread on social media over the weekend, with activists urging parents to pull their children from school — and teachers and other school employees to join them by staying home from work.

Demonstrations were urged throughout the state — with the largest, the  “Our Children, Our Choice!” rally, expected in Sacramento at 10 a.m. Monday, according to media reports. Cal Matters reported that around 2,500 people intend to protest in front of the state Capitol building in Sacramento, citing a permit approved by the California Highway Patrol.

It wasn’t clear how the protests would impact individual school districts, or how large the movement would be in Los Angeles County. But it was clear, several groups were partaking in demonstrations, including in the Los Angeles Unified School District, where the policy requires staff and students to be vaccinated and tested.

About 160 people attended a rally by the Lake Balboa/Anthony C. Beilenson Park in Encino, organized by LAUSD Parents for Choice.

Amanda, the founder of the group who did not want her full name used out of concern for retaliation against her family, said some group members have gotten their COVID-19 shots and that some have children who have received all other immunization shots that the state requires of students attending school in person.

Not everyone in the group opposes vaccines wholesale, but they are concerned about exposing children to a vaccine whose long-term impacts haven’t been fully studied, she said.

“We don’t want this for our children — at least not yet,” she said about the coronavirus vaccines. “The clinical trials aren’t done. It’s not even FDA-approved yet. LAUSD is getting way ahead of what Newsom’s (mandating).”

(The Pfizer-BioNTech vaccine has been approved by the FDA for people 16 and older, while it has received emergency-use authorization for a booster to those most vulnerable to the disease. The vaccine also continues to be available under emergency use for people 12 to 15 years old).

Newsom previously decreed that all teachers and school staff in public and private schools had to be vaccinated by Oct. 15, or undergo weekly COVID-19 testing.

Also, California became the first state to mandate vaccinations or testing for eligible students studying on campus when Newsom signed the requirement Oct. 1.  Newsom’s goal is to have all students in seventh through 12th grades vaccinated by next fall once the shots gain final federal approval for everyone 12 and over. Students who don’t comply can be assigned to independent study, though exemptions for medical and religious reasons would be considered.

The state plans to require students in kindergarten through sixth grades to get the vaccine, Newsom said, when the anticipated final federal approval is granted for students ages 5 to 11.

Summer Bailey, whose son is a senior at West Torrance High School, said he would not attend school on Monday. He’ll miss English, a government class and an ASB meeting. But she said he will be allowed to attend football practice.

The 17-year-old, like most high schoolers, spent nearly two academic years away from the classroom. He attended online school part of sophomore year and his entire junior year.

Bailey is a founder of South Bay Parents Push Back — a Facebook group advocating for vaccine and mask choice for students that has expanded to about 500 members.

“It‘s really disheartening and sad — and it’s not fair,” said Bailey, about the mandates. “All we want is the option, or the choice.”

Participating in the sit-in today, however, is not so much for high schoolers like her son, said Bailey. Rather, it’s a way to advocate for younger students who suffered mentally and physically from lack of social interaction in the classroom.

Still, said Bailey, in her experience, schools are unwilling to work with parents who aren’t ready to accept vaccinations. Students, she said, feel excluded.

And she added, for her this is not a political issue.

“I know people think that this is far right, political and all that,” said Bailey, who added her group has a mixture of vaccinated, unvaccinated as well as anti-mask and pro-mask parents.

“We all understand each other’s choices, and we respect that,” Bailey said. “We understand what can happen if you start taking away people’s choice.”

Newsom issued the first-of-its-kind order in August, at a time when the delta variant of COVID-19 was ravaging the region during a nationwide summer surge.

Since then, after a doubled-down effort to encourage masking and vaccinations, rates statewide and in Los Angeles County have waned. But public health officials lament a lagging rate of vaccinations that is keeping the region short of its goal of much-coveted herd immunity.

Officials fear the county is still vulnerable to yet another surge — and the emergence of more variants — during the winter flu season.

Newsom defended his move — and the efficacy and safety of vaccines — in a statement: “This is about protecting our children and school staff and keeping them safely in the classroom. Vaccines work and are how we end the pandemic.”

The order, issued Aug. 11 and effective Oct. 15, requires verification of vaccination status among eligible K-12 school workers statewide. It establishes diagnostic screening tests of unvaccinated workers in an attempt to minimize the risk that they will transmit infections while on K-12 school campuses, where many students 12 and younger are not yet eligible for vaccines.

Public health officials have been buoyed by the success of measures such as masking, distancing and quarantines already happening at the more than 3,000 schools across L.A. County that serve a total of about 1.7 million students.

The virus’ trend lines have been falling at schools. The week ending Oct. 3 saw 1,090 student cases. A week later that number dropped to 591. And two weeks ago, there were 167 staff cases. Last week there were only 67.

Concern remains over the threat of outbreaks in local schools.

Since Aug. 16, there were a total of 21 outbreaks in youth sports programs. There were 394 cases and 1,527 contacts. Most of those infected were unvaccinated, officials said.

In Los Angeles County, the state’s mandate kicking in this week coincides with the launching of the Los Angeles Unified School District’s worker requirements. District employees at the second-largest school system in the nation who get their first dose of the Pfizer-BioNTech or Moderna vaccine can remain working on campus, provided they get their second shot by Nov. 15.

The nation’s second-largest school district gave employees through the weekend to receive their first dose of the Pfizer-BioNTech or Moderna vaccines or the one-dose Johnson & Johnson vaccine. Those who did not provide proof of vaccination by the end of the weekend could be barred from campus come Monday And unless granted an exemption or accommodation to work remotely, they would effectively be placed on temporary paid leave.

The government has fully approved the COVID-19 vaccine for those 16 and over but only granted an emergency authorization for anyone 12 to 15. Once federal regulators fully approve the vaccine for that group, the state will require students in seventh through 12th grades to get vaccinated in both public and private schools, Newsom’s office said.

The requirements have not sat well with many, however, reflecting the fractious nature of the virus that has not only killed but divided people over pandemic-era policy.

At LAUSD, which has a more stringent policy than the state’s, students 12 and older who participate in in-person extracurricular programs must have received their first vaccine dose by Oct. 3 and their second dose by Oct. 31. For students not in those programs, all 12 and older must receive their first dose by Nov. 21 and their second by Dec. 19. All other students must receive their first dose within 30 days after turning 12 and their second dose no later than eight weeks after their 12th birthday. Students would have to provide proof of vaccination by uploading the information to the district’s Daily Pass web app before Jan. 10 in order to access LAUSD school facilities.

The district has been sued over the mandate, its challengers arguing that the requirement is unlawful because it does not allow for religious or personal exemptions.

A lawsuit was filed last week on behalf of a parent of a 12-year-old student who claims that their child, along with other LAUSD students who do not comply with the mandate, would be discriminated against by being denied an in-person education and the opportunity to participate in extracurricular programs.

A similar lawsuit was filed against San Diego Unified by the group Let Them Breathe, which was formed in opposition to school masking mandates and which subsequently launched a Let Them Choose initiative to oppose COVID-19 vaccine mandates for students.

The San Diego school board voted in September to require students 16 and older to be vaccinated against the coronavirus in the coming months.