As port cargo keeps ramping up, so do containers, double-parked trucks in nearby Wilmington 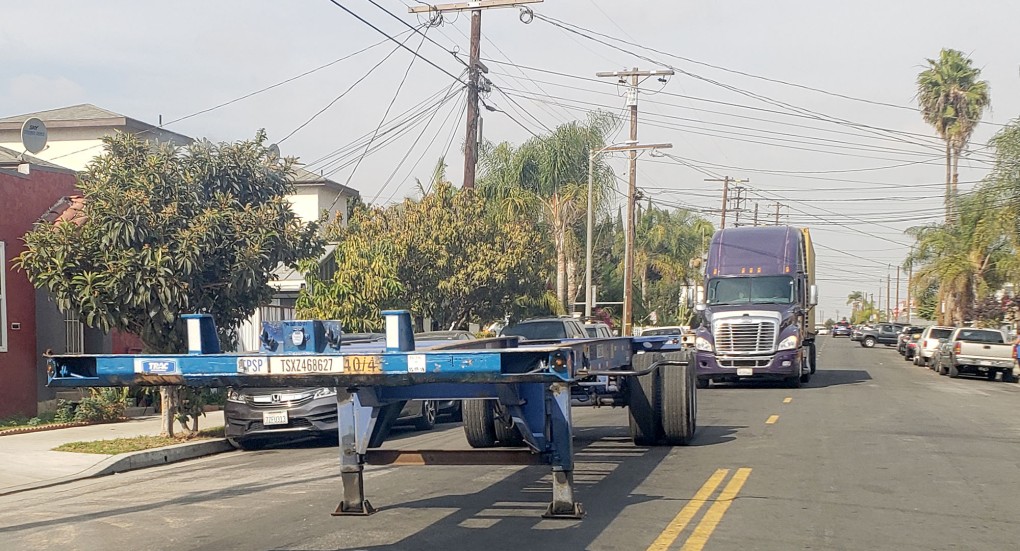 Stacks of shipping containers seem to be everywhere:

Aboard ships. At packed terminals. In overflowing warehouses.

And now, one Los Angeles harbor commissioner says, on some Wilmington neighborhood streets.

Commissioner Lucia Moreno-Linares, a Wilmington native, recently raised the issue at a board meeting, saying more enforcement is needed, because  containers have spilled into the neighborhood as the Ports of Los Angeles and Long Beach deal with a more-than-yearlong cargo surge that’s created a supply-chain bottleneck. That logjam has been so severe, it’s caused President Joe Biden to intervene, prompting him last week to announce the LA port would implement 24/7 operations.

The pileup of cargo containers has been exasperated by shrinking warehouse space. Empty containers — of which there are many, because of an ongoing trade imbalance — must also be shuttled back to Asia. But until then, they get pushed around port properties in search of storage space.

And in some cases, they wind up stacking up on lots in the surrounding communities.

That was the case on Thursday evening, Oct. 14, when a hibiscus-red container blocked a lane on McFarland Avenue.

McFarland, along with the intersecting Anaheim Street, is a particular trouble spot, Moreno-Linares said. She saw double-parked trucks, in fact, on both thoroughfares during a recent Saturday morning, the commissioner said.

“All of us have noticed an increase of containers,” Moreno-Linares said at last week’s Los Angeles Board of Harbor Commissioners meeting. “They’re not in a warehouse; they’re sitting in every empty lot and maybe that would be OK, but there also in the middle of the street.

“Some of the lots are using streets to stage how the containers get in and out,” she added, “and those of us who are driving (the streets) are stuck.”

While the ports do not control those lots, Moreno-Linares said, the backlog these past few months has “really increased the burden that the local communities, and certainly Wilmington, have always had to bear in terms of truck traffic.

At least in the past, she said, the congestion was from trucks that were going somewhere.

A port spokesman said the containers were “most likely empties.”

Moreno-Linares has called for better enforcement. There should be coordination, she said, between the city’s code enforcement team and Port of Los Angeles Police.

“This problem is a consequence of the growth of this port,” she said. “It’s having an effect on everyday people right now.”

“I met with a lot of Wilmington folks just this week at the Wilmington Chamber,” Seroka said, urging people to report problem areas. “Those folks are echoing your statements. The mayor (Los Angeles Mayor Eric Garcetti) and I were on the phone just the other night and he was saying that he, too, has seen containers parked on the side of streets, whether it’s in the (San Fernando) Valley or Wilmington, it doesn’t matter.

“We need to keep flagging these areas where there are bottlenecks,” Seroka added.

The Wilmington Neighborhood Council, during an April 1 harbor commission meeting, also expressed concerns with port-related impacts seeping into the neighborhood.

“We suffer the most from impacts,” Gina Martinez, chair of the neighborhood council, said during that meeting. She asked for better communication between the port and neighbors.

Commissioners, however, noted that there were numerous ways individuals and groups could communicate with the port, including a monthly time Seroka sets aside to meet with leaders of the area neighborhood councils, along with individual meetings that can be requested with commissioners.

Among the complaints Martinez raised at that meeting were truck and shipping container storage yards that are increasing as port business has boomed. Health concerns, blocked views, and damage to roads and streets were other issues brought up.

Moreno-Linares, in a recent telephone interview, also called for better enforcement of trucks traveling on roads they shouldn’t be. The heavily-loaded trucks transporting containers from the port need to say on the designated streets within the Wilmington community, she said.

Too often, Moreno-Linares said, they’re being spotted on narrower neighborhood streets. The massive vehicles rumbling over narrow streets surrounded by homes, she said, not only is disruptive but also dangerous to other motorists and pedestrians.

Cargo unloaded from ships “has to get to the stores and other destinations, I understand that,” Moreno-Linares said. “But that’s why we have designated (truck) corridors. We need to do a better job.”