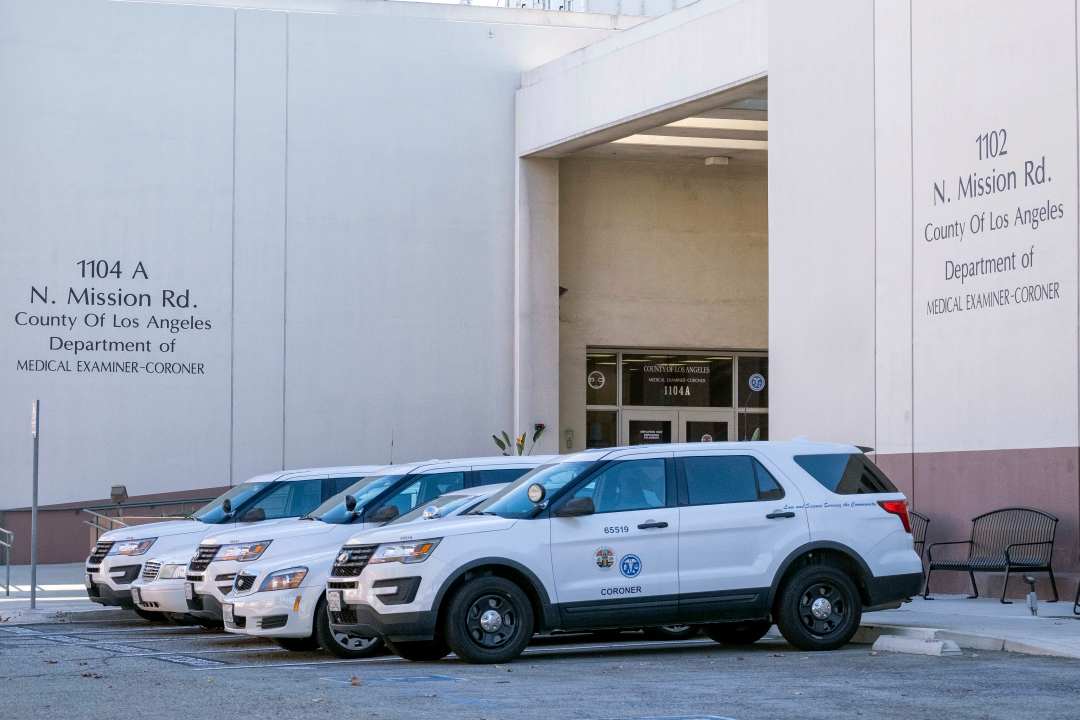 With coronavirus claiming staggering numbers of lives in Los Angeles County, strapped private mortuaries unable to take on more bodies are straining local hospitals’ morgue capacity, forcing them to transport the deceased to the county’s coroner.

County officials acknowledged the strain on Wednesday, when the pandemic’s toll topped 10,000 in the region, with fears that it will only get worse as overwhelmed healthcare workers scramble to keep up with thousands of patients a day.

As bad as it has become on the frontline, that toll is now pressuring the backend as so-called “last responders” scramble to preserve the dignity of the dead. So much so that on Monday, the California National Guard will send six members to help the L.A. County Department of Medical Examiner-Coroner with administrative and management functions to deal with the crisis.

In a normal scenario, when a person dies under a doctor’s care at a hospital, a physician will sign a death certificate and that person will ultimately be transported to a mortuary. The coroner’s office generally takes a body only when seeking to determine the circumstances, manner, and cause of “all sudden, violent, or unusual deaths, and those deaths where the deceased has not been seen by a physician 20 days prior to death,” according to the department.

But now, mortuaries have become so backed up with bodies that hospitals are now leaning on the coroner’s office for increased capacity, officials said.

“We are seeing so many excess deaths from COVID-19, some days with over 140 people who lost their lives from COVID alone,” said L.A. County Supervisor Hilda Solis. “Our medical examiner is taking overflows from bodies from hospitals that do not have room to store them. It’s such a grim reality, but I’m compelled to say this because it has gotten to the point where we need to show the true toll of what this virus has taken and can take.”

As of Sunday, the coroner — which is a different county department than the Department of Health Services, which runs the L.A. County Morgue — had 688 decedents in its facility, according to a spokeswoman.

Early on in the pandemic the coroner’s office took steps and developed plans to add to the facility’s body storage capacity. Those steps included refrigerated storage additions that were installed in the beginning of April.

With sobering death tolls in recent days, that added capacity became sorely needed as mortuaries forced hospitals to divert bodies to the coroner.

During normal operations, the department can store up to 500 bodies. With the additions, it can further hold 1,500 bodies for a total of 2,000, according to a department spokeswoman.

She noted that the coroner’s caseload is up this year, but the majority are not COVID related, instead including people who died because of accidents, suicides, natural deaths (majority not COVID-19 related) and homicides.

Still, with increasing deaths expected into January — the so-called “surge upon a surge” — that capacity will be tested.

As it stands, there were 386 spaces available. The morgue system has also added trailer capacity, and officials said they are prepared to add more.

As of now it’s “certainly more than enough, we would hope, to meet the needs of the DHS hospitals and we’ve been working very closely with the med examiner-coroner,” Ghaly said. “They have taken the responsibility for working with private hospitals in the area who are having an issue with the backup of some of the bodies because of the inability of the private mortuaries to take bodies once people have passed away.”

“If necessary, we are prepared to increase capacity by working closely with other county departments,” according to a statement from the Department of Health Services.

Private hospitals, too, have been preparing as they face spikes.

Part of the disaster planning at the Providence Southern California network of medical centers includes the installation of temporary morgues to accommodate the overflow experienced during events that lead to more deaths than the hospital morgues and mortuaries can accommodate, said Providence spokeswoman Patricia Aidem.

“The COVID surge continues, and sadly we need to prepare so that we can accommodate our deceased patients in a dignified way,” she said.

Tragically, the phones are ringing off the hook at local funeral homes.

Nichol Montague, South Los Angeles Cremation services manager, said the facility has been extremely busy recently, with a large number of deceased received, with COVID-19 as the cause of death.

“There are a lot of coronavirus cases,” Montague said. “All the calls I received this weekend have been for coronavirus.”

Montague said there were four or five remains ready to be cremated as of Monday morning and about 10 more that need to be picked up from hospitals and nursing homes.

In addition to the sheer numbers, Montague said cremations and burials have been held up by the slow process of confirming death certificates.

“Before cremation or a burial is allowed to take place, the doctor has to give you the cause of death,” Montague said. “Doctors are not in their offices a lot. Once they are in their office and we receive a cause of death, they must be approved by the health department. But they are only open for half a day.”

In other cases, when someone dies at home and their doctor can’t be reached, the case is referred to the L.A. County coroner, causing further delays.

“I had a case this weekend when a family couldn’t contact the doctor. The doctor didn’t respond,” Montague said. “So the coroner picked up the case. But when I called the coroner they said they only had two people in the office.”