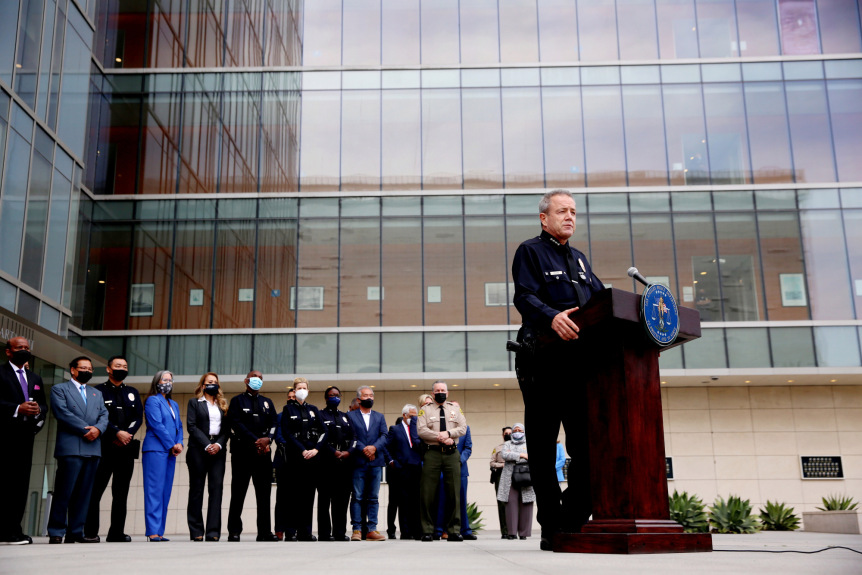 Los Angeles Police Chief Michel Moore and Sheriff Alex Villanueva on Monday encouraged Angelenos to exercise their civil rights peacefully and refrain from acts of destruction as they await a decision in the trial of former Minneapolis police officer Derek Chauvin.

They were joined by faith leaders and city officials in the courtyard of the LAPD’s headquarters on 1st Street during a news conference as court proceedings against Chauvin in the death of George Floyd entered their third week. Moore and Villanueva said they are prepared in case people take to the streets as the trial unfolds, and their departments will do everything in their power to secure people’s right to exercise free speech.

“We must also strive to not allow legitimate anger and frustration to spiral into violence, or allow others to hijack these communities’ emotions for their own destructive purposes,” Moore said.

He and Villanueva declined to go into specifics, but said law enforcement is monitoring for upcoming events and will have resources on hand to protect nearby businesses and property. Officers and deputies will focus on identifying and isolating anyone attempting to commit crimes from those lawfully exercising their first amendment rights.

“We are hoping persons will find means well within what is right and well within what is called the law to express their opinions and responses to whatever the verdict may be in the Chauvin case in Minneapolis, Minnesota,” Pastor Edgar J. Boyd of First African Methodist Episcopal Church said.

Capri Maddox, General Manager of Los Angeles’s Civil + Human Rights and Equity Department, said at the news conference she was deeply traumatized by the killing of Floyd last May, and again by the fatal shooting of Duante Wright by Minneapolis police, on April 11. Those deaths at the hands of police brought her own fears — as a black woman and the wife of a black man and mother of a black teenager — to the surface.

“I make sure that his parents’ names and phone number are on all of his materials so that in the event that he does have an interaction with someone, they know they can call us,” Maddox said. “It’s still not enough to stop that pit in your stomach, to wonder if something goes wrong, could you get a phone call that could change your life for life, like what happened to Duante’s mother just a couple days ago.”

But she also recalled memories of riots that roiled the city in the wake of a verdict in the beating of Rodney King by LAPD officers in 1992.  Maddox was a student working with the city’s Housing and Community Investment Department, and said it took years to recover after calls for social justice gave way to fires and looting.

“I don’t want to see our city fall apart again, because that’s not who we are,” Maddox said.

She and others like The Wall Las Memorias Project Founder Richard Zaldivar said at the news conference they believe it is possible to advance social justice without resorting to violence or destruction. Zaldival cited the historic examples of Martin Luther King, Gandhi, Mother Teresa and others.

“We can change our community. We can speak up with respect. But we ask no violence,” Zaldivar said.

The destruction of property is not a victimless crime, Rabbi Abraham Cooper of the Simon Wiesenthal Center said. It takes a toll on families and members of the community trying to earn a living, Cooper said.

“The excuse, sometimes proudly, offhandedly said: it’s only a building,” Cooper said. “That’s a lie. When you destroy that business, you destroy a family’s dream, you destroy neighborhood jobs, you destroy hope itself.”

Numerous businesses were vandalized during protests throughout Southern California held last summer in response to the deaths of people in the custody of police. Authorities are actively working to identify and prosecute those responsible, Moore said.

But the overwhelming majority of those taken into custody by the LAPD during demonstrations were cited for violating curfew, and Moore noted that many of those people did go on to face criminal proceedings. He said those arrests helped to deter others from breaking curfew, and stood behind the City Attorney’s exercise of prosecutorial discretion.

Moore said he believes his officers have taken great effort to exercise restraint. But he also acknowledged the department is actively investigating over 600 complaints against officers regarding their conduct during demonstrations. In addition, a pair of reports commissioned by the Los Angeles City Council and the Los Angeles Board of Police Commissioners that were both released April 9 were critical of the department’s handling of the protests.

“This past year has given us all time to reflect on the injustices that remain in our society,” Moore said Monday. “While I’m proud of how the LAPD has led in 21st century policing, I recognize we have further to go to build trust in support of the people we serve.”