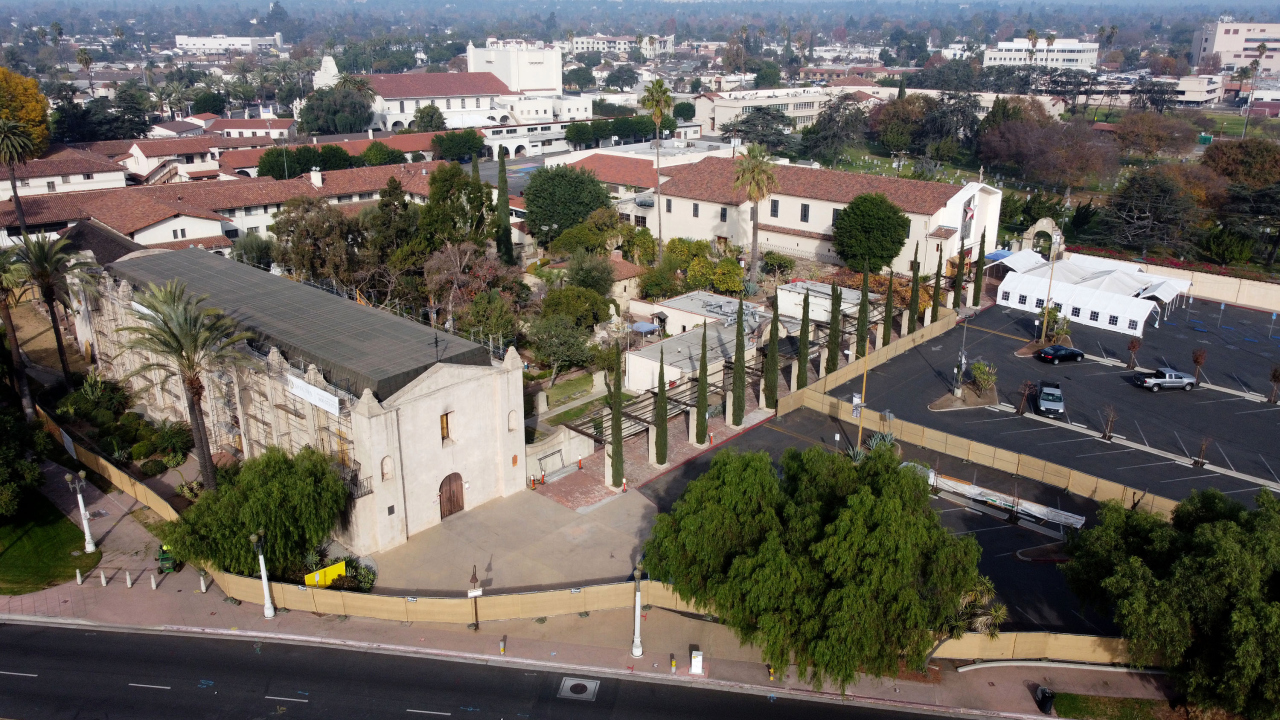 Carrie Evanilla sighed, then spoke about a morning she will never forget.

“It was very devastating,” she said Wednesday, of the four-alarm fire on July 11 that swept through the church at the Mission San Gabriel Arcangel, which next September will celebrate its 250th anniversary. “My husband woke me up because he had woken up at 4:30 in the morning. He read a text from someone saying, ‘There’s a fire at the mission.’ “

“We jumped in our car, drove up there and just to see that as I drove up the street — I live just south of the mission — I just broke into tears,” Evanilla said.

Five months later, there are fences around the church, which is undergoing a renovation that is roughly a year away from completion, Father John Molyneux said. Not far away is the Chapel of the Annunciation. In front of it are large tents, under which outdoor Mass is celebrated because of the coronavirus pandemic.

Christmas is here, but it won’t be the same at the mission.

“I mean, we got the double-whammy,” Father Molyneux said. “We got the church and we got the COVID all at the same time. Yes, it’s been difficult. It’s been challenging.”

Evanilla typically goes to the same Mass, sits in the same area and speaks with the same people. But with no midnight Mass this year because of the coronavirus-related 10 p.m. curfew, along with everything else, that won’t happen.

“Not seeing those people in Mass is going to be really hard because you go to different masses now than you normally do, so sometimes you don’t even know the people you’re at mass with,” she said.

Another longtime parishioner, Ortencia Ramirez, talked about her pain from the fire and it is heavy.

“I know this is going to sound weird, but it’s like I had lost someone,” said Ramirez, a parishioner of the church for 25 years. “Of course, a human life means much more, but it was just that feeling of emptiness just came over you.”

A feeling of faith

Indeed, this has been a difficult time for the church and its parishioners, but Father Molyneux is optimistic about a return to normalcy.

“I think it’s actually kind of hopeful at this point,” he said, of the mood at the mission at Christmastime. “Especially, we have begun the renovation, so people are seeing signs of renewal. The temporary roof is on, workers have been in and out and I think people see a process, a process of renewal.

“I think that’s hopeful, you know? We’re still waiting for the results of the investigation, which is taking a lot longer than a lot of people thought it would. But I understand also that that should be coming very soon.”

An intriguing part of the renovation is replacing the floor of the Sacristy, which sunk during the fire.

“Right now they’re in the middle of excavation of the floor and the other thing is because this was Native-American land, whenever we do any digging we have to have Native-American monitors watching,” Father Molyneux said.

It would seem a special kind of motivation is needed to endure this situation, and Father Molyneux has been working to provide that during Mass, as well as to staff members.

“I’ve been trying to get the whole idea of crisis and opportunity, especially around COVID,” said Father Molyneux, who came to the mission in July 2018. “Now, as far as the fire is concerned, we’re resurrection people and we suffered a death.

Ramirez is experiencing what Father Molyneux is preaching.

“I feel very hopeful,” she said. “The community, even though we’ve been dealing with the pandemic, has united. We’re having our services outside and we’re right beside the old mission, so it’s just very inspiring to see it standing there still after so many things it’s been through — through earthquakes and now this.”

“I believe God is helping us through this and has brought so many wonderful people donating money and organizations coming through,” she said. “… I’m very hopeful and Father’s done a tremendous job of keeping our spirts up; he always has a smile on his face and he’s always very upbeat.”

Pastoral associate Margarita Flores, in an email, talked about the daily challenges of restoring the old mission church as well as the community’s loss of energy at Christmastime.

She wrote something else that reflected the never-give-up attitude of the parish.

“At our old mission and Chapel of the Annunciation, we are not the same,” she said. “Our posadas (Mexican Christmas ceremony) canceled, no midnight Mass, religious events postponed. Many community members feel the absence of their spiritual practices, and they feel the coldness and loneliness of this season.

“Although, I have to say that during this time, ‘fire in our hearts’ continues as we (have) served over 400 families each week on Sundays during our Food Pantry Ministry.”

Father Molyneux said that, yes, parishioners have been generous with donations toward the renovation, much of which will be paid for via insurance held by the L.A. Archdiocese as well as fire restoration funds established at the mission as well as the Archdiocese, which says it currently has no cost estimate for the damages because the investigation has yet to be completed.

In his mind, it’ll all come together. He believes that as much as he believes there was some divine intervention when a treasured 18th century painting of the Virgin Mary was found intact amid the burned rubble inside the church two months after the fire.

“I think we have to believe that — and it was on the Feast Day of Mary as well — so we have to believe in miracles,” said Father Molyneux, who was to deliver Christmas Eve Mass at 4 p.m. and will preside over Christmas Day mass at 11:30 a.m. “I mean, it was something that was there and it was something that just happened to be pulled out that day.