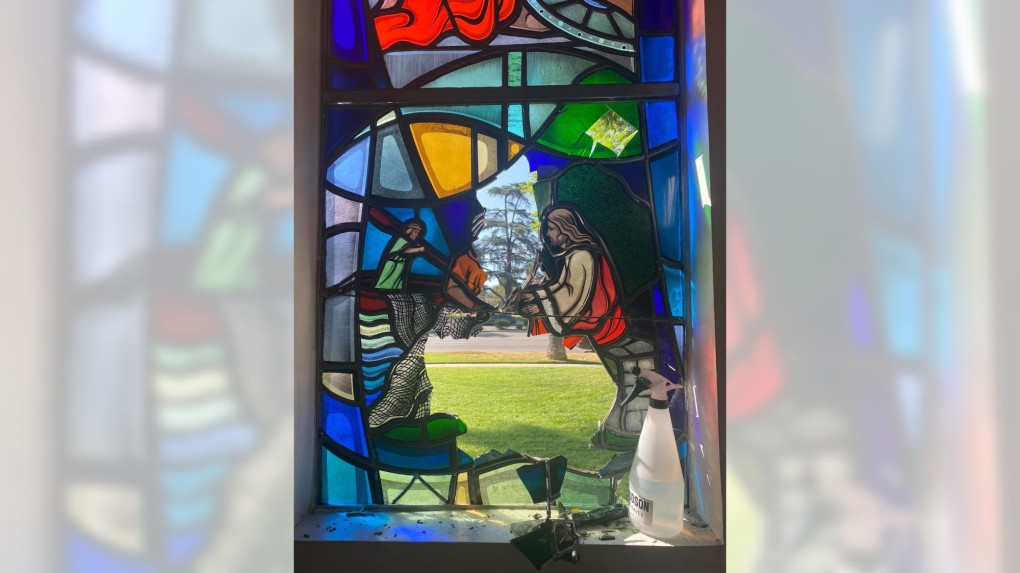 While police continued their search for a vandal who broke eight stained-glass windows at St. Peter Armenian Apostolic Church in Van Nuys on Thursday morning, Sept. 23, the church’s head priest said Friday he believes his congregation was the victim of a hate crime.

Security camera footage reviewed by LAPD and church officials showed a masked individual dressed in black, armed with a baseball bat and carrying a black duffel bag, walking up to the outside of the church’s sanctuary at 17321 Sherman Way on Thursday around 1:30 a.m., said Shnork Demirjian, the church’s head priest.

The individual goes on to swing the bat at eight of the sanctuary’s stained-glass windows and then leaves, according to the church’s and police accounts. It was unclear what the individual carried inside the bag.

Later Thursday morning, Demirjian’s secretary arrived at the church. Before starting work, the secretary carried out his routine of saying a prayer in the sanctuary, Demirjian said. When he walked inside, the secretary discovered shards of glass scattered throughout the sanctuary and below the damaged windows.

The secretary immediately called Demirjian who then alerted other church officials and the police.

Without any written messages, LAPD officers told Demirjian they have little to establish a possible motive in the crime, the priest recalled.

At this stage in the investigation, police called the crime vandalism, but told Demirjian they will still pursue the possibility of a hate crime.

Demirjian said he feels the crime was an anti-Armenian attack, pointing to Armenian Independence Day, which was celebrated days before the incident on Sept. 21.

The timing also prompted Demirjian to recall a separate incident in which an arsonist set fire to an Armenian church and school in San Francisco on Sept. 21, 2020. That incident, which left the church badly damaged, was determined to be a hate crime. Suspect had also scrawled anti-Armenian messages at the church.

Demirjian also felt their Christian faith was a target, adding that the vandal chose specific stained-glass windows that depicted the life of Christ.

“My answer to (police) was if that person takes a baseball bat and shatters the icons of the saints and Christ, that in itself is a message, more than writing on the walls,” Demirjian said.

The LAPD detectives handling the case could not be reached for comment on Friday evening.

The church’s sanctuary, including the stained-glass windows, was built in 1966, according to the church’s Facebook page. The church described itself as “the backbone of this unique Armenian community” in the San Fernando Valley.

Since Thursday’s crime, the church has received an outpouring of donations and support from many in the community who have had ties to the church.

“They came with tears in their eyes, saying ‘I was baptized here, I was married here,’” Demirjian said. “A lot of history.”

On Friday, workers cleaned up the shattered glass and covered the broken windows with wooden boards. Church operations continued. A baptism ceremony was held at the sanctuary on Friday evening.

During Demirjian’s tenure, which began in 1991, he said the church has been victim to several burglaries and another vandalism incident where teenagers had painted satanic symbols throughout the building.

The church is still surveying the cost of the damaged windows.