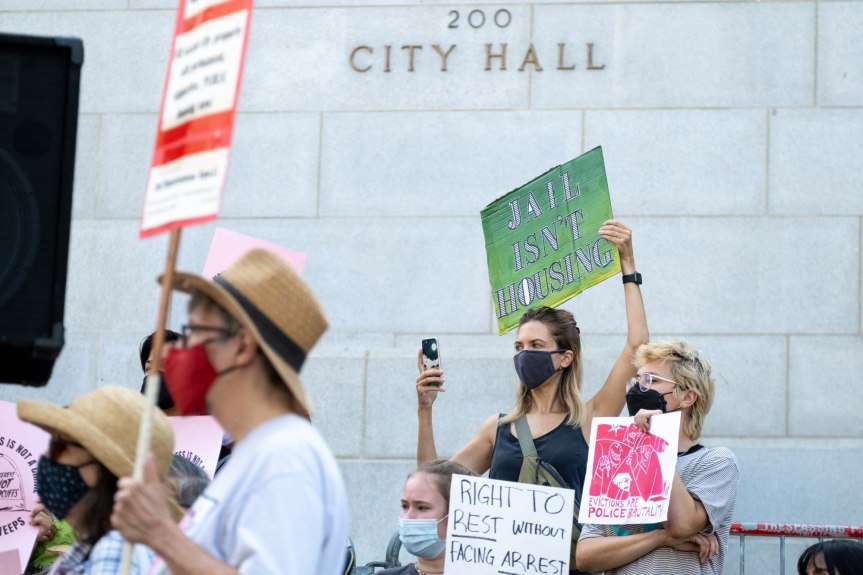 A law aimed at banning sleeping, sitting and lying down in Los Angeles cleared the Los Angeles City Council Wednesday, and is now headed to Mayor Eric Garcetti’s desk for his signature.

If it goes into effect, the law could serve as a powerful tool for the city to clear homeless encampments, which have sprung up in greater numbers around Los Angeles amid an ongoing housing affordability crisis. Garcetti is planning to sign the ordinance, a mayor’s aide said.  An earlier version of this ordinance, Los Angeles Municipal Code 41.18, had been suspended following a 2006 court injunction.

Revisions to that ordinance had already received tentative approval nearly a month ago, when the council voted 13-2 in favor of it. Because it was not unanimous, the issue had to return for a second reading and vote.

The prohibitions against living on the street, in the public right-of-way, would not necessarily apply everywhere, immediately. Under the ordinance language, in order for the anti-camping provisions to apply, the City Council would need to approve a resolution designating the area where they want the prohibitions enforced and post a sign notifying people of that enforcement.

These enforcement sites could be proposed around many locations, including homeless shelters and services facilities, tunnels, under- and overpasses, bridges, freeway ramps, railways, washes, spreading grounds, as well as near so-called “sensitive use” sites such as daycares, schools, public parks and libraries.

Activists and unhoused Angelenos rallied outside Los Angeles City Hall again to speak out against the ordinance, which meanwhile was buffeted by support not only from 13 members of the 15-person City Council, but also some residents and representatives business organizations who spoke during public comment.

Kris Larson, who runs the business improvement district in Hollywood, urged the council to approve the ordinance, lamenting that “we have entire blocks that are better described as blockades, as no one can get through them and are thus forced onto the streets.”

He said the city needs such “regulation” in order to “protect accessibility and connectivity for all Angelenos.”

Others called in a last-ditch attempt to change the majority of the council’s minds. Renay Grace Rodriguez, an attorney who provides pro bono services to homeless families, called the law making it illegal to sit, lay down or sleep in many parts of the city a “travesty.”

“Let’s put blame where blame belongs,” Rodriguez said “The overdevelopment of luxury housing has expanded, and the unhoused population has expanded, and you have not done nearly enough of what has been required to remedy this situation. There have not been enough beds put up, there have not been the services provided, and now you want to sweep, people under a rug you want to hide them from public view, you can hide the shame, which is of your own creation.”

Some City Council members acknowledged the deficit in housing and shelter space, while others said that the ordinance would not criminalize homelessness as activists and those experiencing homelessness have described it.

Meanwhile, outside City Hall, Irit Smith entreated others to treat her and others who are homeless as “human,” pushing back against policies and perceptions that characterize people in her situation as “nobodies.”

“I just want to be human,” Smith said. “And I want all my unhoused friends to be treated like human, on top of all the rights that we deserve like everybody else. What did we do wrong? We struggled a little bit more than others? Just treat us like human. That’s it.”

UCLA researchers working in the area of public health released a map on Monday, in an attempt to answer questions of what parts of the city would be left for the unhoused to be if the restrictions in the ban were to put into place. The map showed that conservatively speaking, potentially 40% of the city could become off-limits.

The researchers also pointed to scarce housing and shelter availability, which could make it difficult for the unhoused to comply with restrictions, and they noted that laws criminalizing homelessness run counter to the aims of public health.

Meanwhile, city officials said they were working on implementing a street engagement strategy that should ideally be followed before encampments can be cleared.