Amid pandemic, some cities have opened their city council meetings to the public 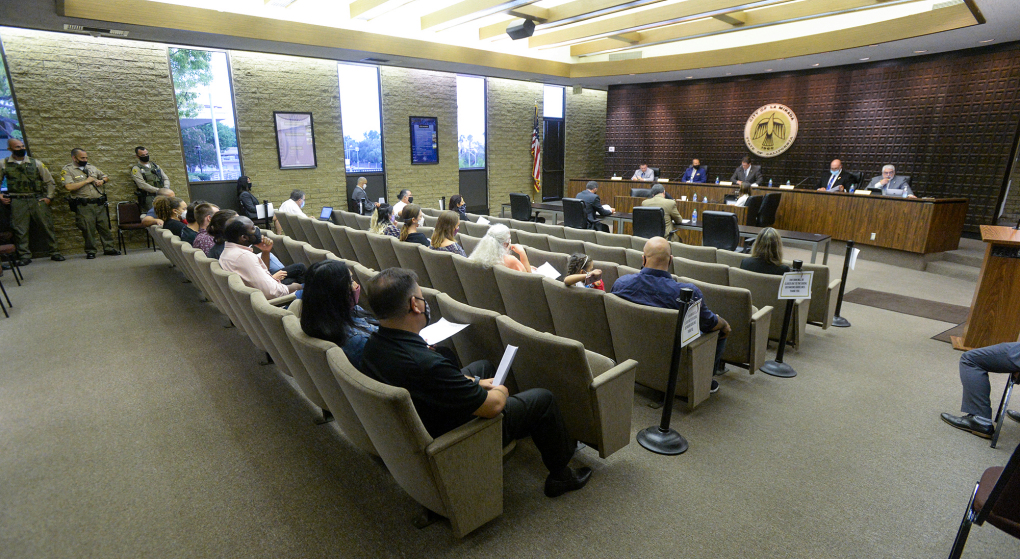 When  La Mirada protesters last Tuesday completed their vigil in memory of Dijon Kizzee, a Black man who was shot and killed by Los Angeles County Sheriff’s deputies in unincorporated Westmont on Aug. 31, they got to do something you can’t do in most cities these days.

They walked from La Mirada Regional Park to City Hall, entered the council chambers and watched the council meeting in person. And one of their group spoke during the public comment period.

La Mirada is one of the few cities — Downey,  Lakewood and Rancho Palos Verdes are some others — that have allowed the public to attend meetings in person since took their meetings online in the early days of the coronavirus crisis.

La Mirada opened its council meetings to the public back in June.

“It makes it easier for residents to get access to the council,” Lewis said. “It also makes running a meeting easier.”

During the city’s Zoom meetings, you couldn’t always hear council members and there were other delays, Lewis said.

“Sometimes you would hear nothing but screeching,” Lewis said.

La Mirada opened its meetings around the same time it opened City Hall and some other city facilities, including the Community Sheriff’s Station and Public Works offices, Boynton said.

La Mirada is able to follow protocols for social distancing. For example, every other row of seats is blocked off. Loose chairs around the hall have been removed, Boynton said. In addition, everyone is required to wear face masks.

So far, everything has worked out, officials said.

Lakewood never banned the public from its council meetings, but only the mayor and city clerk were attending meetings in person last spring, City Manager Thaddeus McCormack said.

By late June, most council members were attending. Later, the meetings were moved to Weingart Ballroom, a city facility that can hold 800 people, McCormack said.

Social distancing is adhered to and everyone entering the meeting has their temperature checked, McCormack said.

Downey’s meetings also also open but the city only allows 10 members of the public in the hall at one time, management analyst Judy Montenegro said.

While there have been waiting lines to get in at some meetings, that’s not always the case, Montenegro said. Last week, there were only six members of the public in attendance, she said.