Amid coronavirus-fueled uncertainty, LAUSD returns to campus today in a ‘first day’ like no other 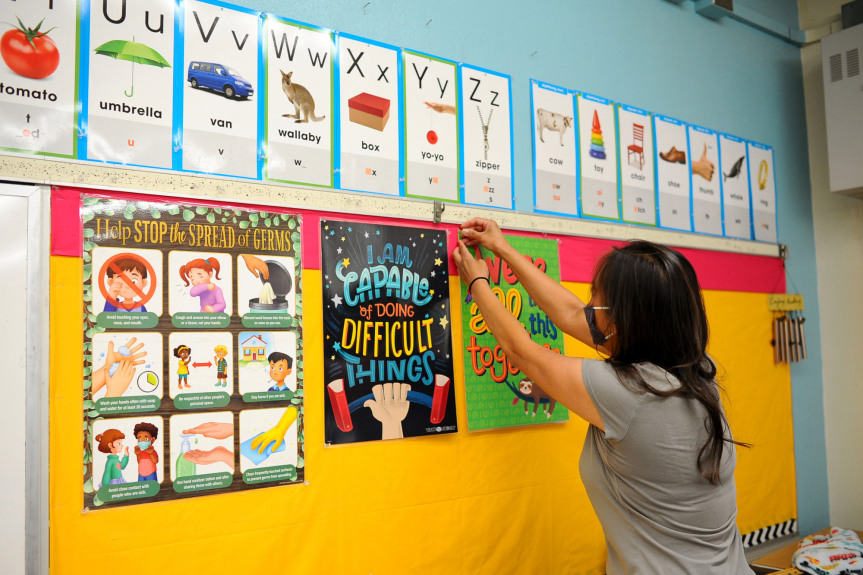 Facing the uncertainty of a surging pandemic, tens of thousands of mask-wearing students and teachers across Los Angeles are scheduled to return to campuses from Pacoima to the Harbor Area this morning, spurred by the prospect of seeing old friends and making new ones after more than a year of learning in front of computer screens.

The return is expected to be a milestone moment at the nation’s second-largest school district, blended with excitement, fear, hope, some confusion and an awareness that this was a first day of school like no other.

Facing the uncertainty of a surging pandemic, tens of thousands of mask-wearing students and teachers across Los Angeles are scheduled to return to campuses from Pacoima to the Harbor Area this morning, spurred by the prospect of seeing old friends and making new ones after more than a year of learning in front of computer screens.

The return is expected to be a milestone moment at the nation’s second-largest school district, blended with excitement, fear, hope, some confusion and an awareness that this was a first day of school like no other.

The journey to this day has been a twisting road steeped in whipsawed pandemic-era policy-making, intermittent controversy, oft-debated district politics and the unpredictable disease itself, which has affected the households of students, teachers and administrators alike.

Campuses were shuttered early last year when the rapidly spreading coronavirus was blanketing the world, and L.A. was no exception. A Friday, March 13, 2020, announcement was followed by an immediate shutdown of the district’s 900 campuses, which serve more than 670,000 students. LAUSD would not be alone, joining at the time a cascading number of districts across the nation closing their doors. At first, the closure was set to be a couple of weeks, as even the President Donald Trump was telling the nation that month that it would be going away “hopefully at the end of the month … or soon after that.”

As the pandemic roared on, officials were left with no good alternatives. They could stay open amid a public health crisis and endanger staff and students and their families. Or they could stay closed to in-person learning, depriving a huge population of students and their families a stable learning and work environment, depended on by thousands for even the most basic of needs, like school lunches and other services.

Virtual learning would take over throughout 2020 and through the worst of the pandemic, followed by a spring that brought many students back to campus. And that would be followed by a summer of virtual graduations. By the time the 2020-21 year ended, the district’s then-superintendent, Austin Beutner, had announced his retirement.

As recently as Wednesday, school administrators, teachers, parents and students across the state were absorbing the state’s latest health order, making California the first in the nation to require school employees to be vaccinated against COVID-19 or submit to a weekly test proving they are not infected with the coronavirus.

LAUSD complied on Friday, with Superintendent Megan Reilly announcing that all district employees would have to be vaccinated by Oct. 15 or face possible termination. LAUSD back-to-school policies already required teachers, students and administrators to be tested, regardless of vaccination status, and to wear masks indoors.

At the beginning of the summer, the coming fall semester was looking a lot more normal. But in the wake of the June 15 reopening of the economy, and of a July 4 holiday period, the Delta variant of the virus flourished in Los Angeles County. And with it, cases and hospitalizations have shot up.

And elementary and secondary students on campuses will receive a full day of in-person instruction, five days a week. And, unlike last spring, when some students came back to campus for learning when case rates began waning, middle and high schoolers will be able  to travel from one classroom to another and see their teachers in person.

While on campus, students, staffers and visitors have to wear masks inside and outside of school buildings, with limited exceptions. Baseline testing for the virus is now required for students and staff each week, regardless of vaccination status. Sanitation efforts will be stringent, physical distancing will be maximized where it can be.

Throughout the pandemic, experts have said the pros of being back on campuses — the emotional and academic benefits — outweigh the cons.

Reuters surveyed school districts nationwide in February, and found that 74% of districts surveyed reported several  indicators of increased mental health stresses among students. More than half reported rises in mental health referrals and counseling. The survey also found higher rates of absenteeism or disengagement. More than half of the distrricts’s said not having in-person education was fueling the issues.

Even still, many families have found virtual learning a viable option under the circumstances.

As of Friday, Aug. 13, there were more than 12,300 students who had expressed interest in signing up for the district’s online independent study program for fall semester. That was close to 3% of LAUSD’s total student population, according to a district spokeswoman.

Public Health officials are relatively confident that children are safe, if testing and vaccination is widespread. Their confidence is buoyed by the fact that children remain less likely to be infected or becoming seriously ill. In essence, at the moment the benefits of being physically in the classroom outweigh the risks.

But it’s clear that unvaccinated children stand a much higher risk of illness, and there remains uncertainty about the variants that could still arise from the virus that could be more lethal.

“Without vaccination, many more children would be hospitalized for this infection,” Los Angeles County Public Health Director Barbara Ferrer said.

“I think parents can feel reassured that schools are creating as safe an environment as possible,” she said. “Is it risk free? Absolutely not. But we’ve heard for months now about the risks of not having children not being able to return to school as well. So I think in this case, a lot of safety measures are in place. Parents should feel reassured that case rates are still very low among children. Serious illness remains relatively rare. And if we all are doing our part, we’re hopeful schools will open with a lot of safety and without a lot of increased risk.”

“One thing we’ve all agreed on is that with this reopening there’s a great need for flexibility as we learn more about mansions in our school environments,” Ferrer said. “The key here is layering on all kinds of protection strategies.”

That layering includes masks, testing, vaccinations and other protocols such as distancing and sanitation.

Officials are monitoring for outbreaks — three or more infections over a 14-day period  that have a link to transmission in a school environment, as defined by Public Health rules.

“When we see that our team is going to be working closely with folks at schools to assess what are the appropriate steps,” Ferrer said. “These are decisions we’re going to have to make as we move along.”