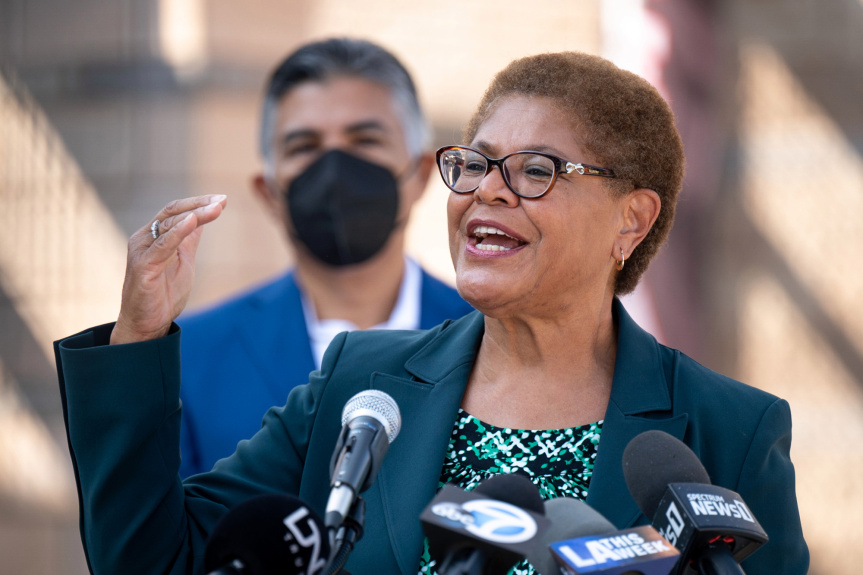 Rep. Karen Bass (D-Los Angeles) responded to favorable polling numbers, saying she is “seriously considering” a run to become the next mayor of Los Angeles, it was reported on Tuesday, Aug. 31.

A poll released on Aug. 23 by a California-based public opinion research firm found that more than a quarter of a sample of the city’s Democrats supported Bass against other current and potential candidates for the 2022 mayoral election.

In an interview with KPCC/LAist, Bass said, “I have been overwhelmed and humbled by people pushing for me to do this, and I will say that I am seriously considering it.”

She said that running for mayor “was not something I had thought about before — I was planning to run for reelection. I am evaluating the situation now.”

Of the group, Buscaino and Feuer are the only ones who have announced a run for mayor in 2022. Ridley-Thomas announced on Aug. 16 that he will not run.

About 27% of Democrats polled said that if the election was held today, they would vote for Bass.

“A plurality is undecided, and the race is wide open, but Bass is the only potential candidate for mayor who can claim a real base of support,” according to a summary of the survey of 803 Los Angeles voters, which was conducted between July 29 and Aug. 5 by Fairbank, Maslin, Maullin, Metz & Associates.

Bass represents California’s 37th Congressional District, which includes Los Angeles neighborhoods west and southwest of downtown, as well as the cities of Culver City and Inglewood.

More than one out of five (22%) of all people surveyed said Bass was their first choice among the candidates, and 8% ranked her second. Bass was the only potential or current candidate who received double-digit first-choice support, and Caruso, de Leon and Ridley-Thomas tied for second with 6% of respondents saying they were their first choices.

The pollsters identified that Bass’ advantage over the rest of the potential candidates comes partly from progressives and liberals, with 34% of progressives and 25% of liberals responding that they would vote for her if the election was held today. She also had the advantage of being the best known among the candidates and leads with Black Angelenos and people on the Westside and in South Los Angeles.

The person who commissioned the poll was not publicly identified, but a representative for the public opinion research firm said the individual is not a politician.