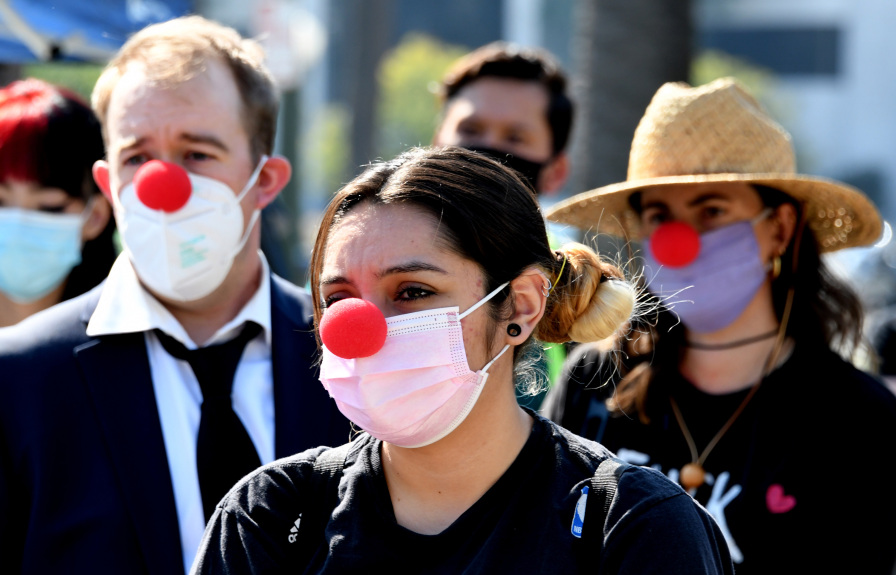 The activists, some who said they had been the subject of the sweeps, as well as others who monitor the zones and set up blockades to prevent the sweeps, are urging the city focus more on providing services to people who are forced to live on the streets.

A truck carrying the small bulldozer parked across from the Getty House, where the Los Angeles mayor lives, read, “This is the Clowncil’s answer to homelessness.”

“It’s not, though!” responded one activist, dressed in the clown ruffles and playing the role of a member of the city sanitation crew that conducts the sweeps.

Meanwhile, activists gave out food and hygiene supplies from under a tent from which a banner was hung that read, “Feed the city.”

Activists called the city’s sanitation department-led sweeps, often accompanied by bulldozers brought in to clear away tents, “inhumane and dangerous.”

“These sweeps are devastating to the homeless community,” said 35-year-old La Donna Harrell, who lives in an encampment around a new homeless shelter that opened in Van Nuys.

“If more people actually saw (the sweeps happening), they would be like, ‘This is pointless,” Harrell said. “This is pointless for them to be spending their tax money (like this).”

The enforcement zones are now set up around homeless shelters set up as part Garcetti’s “A Bridge Home” program, which promised that streets around such facilities would receive additional funding for sweeps.

City leaders have been urged by residents to address encampments that have spread to more parts of the city amid the homelessness crisis, contending that they are eyesores and pose health and safety risks.

The sanitation sweeps, which enforce a city code that restricts the storage of belongings in public areas, have recently also been accompanied by mobile shower units and trash pick-up services that were included at the urging of activists.

Public officials have temporarily housed some homeless Angelenos in motels and hotels during the pandemic, and this week they were awarded state grants, under a program known as Project Homekey, to fund efforts to purchase motels and other sites that will be set up as permanent housing.

On Saturday, activists called for the zones to be dissolved and for a halt to the of  “comprehensive” sweeps that require that people quickly gather up their tent homes and belongings on a regular basis to make way for sanitation cleanups. Instead, they are calling for hotel and motel rooms, as well as permanent housing to be provided to unhoused people.

They are also calling for an end to law enforcement involvement in homeless outreach, and for a committee made up of unhoused people to be set up to oversee policy and governance decisions on issues related to homelessness.