‘A few’ LAUSD workers have yet to comply with vaccination mandate 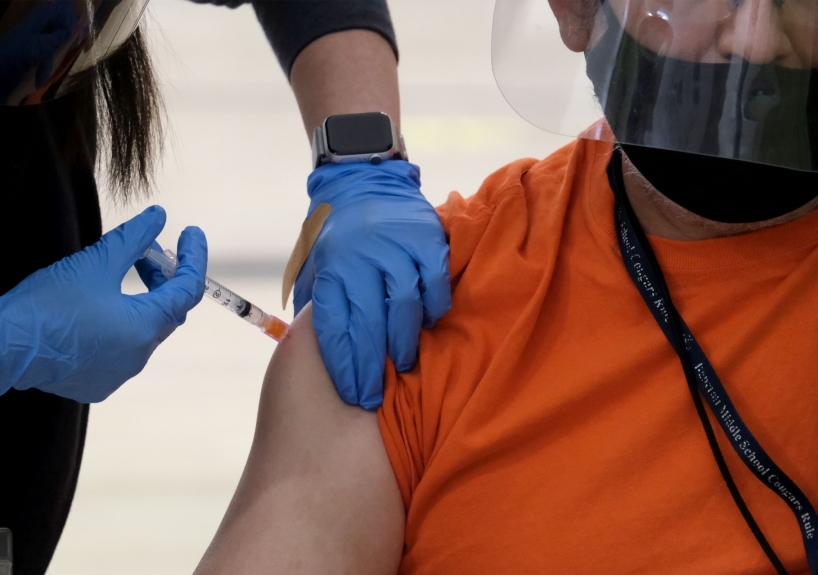 With the deadline looming for employees in the nation’s second-largest school district to show proof of having received their second of a two-dose COVID-19 regimen, a spokesperson for Los Angeles Unified said Monday evening, Nov. 15, that “a few” staffers still had until the end of the day to submit their documentation.

Workers who don’t comply with LAUSD’s vaccination mandate could be placed on unpaid leave or fired.

“Employees working in-person in Los Angeles Unified have been vaccinated,” the spokesperson wrote in an email. “There are a few employees who still have until the end of the day today to upload the record of their second vaccine dose. Employees who have not been vaccinated and who have not received reasonable accommodations will be continuing through the dismissal process.”

Last month, after the deadline had passed for employees to get at least their first vaccine dose, the district reported that 97% of all staff members had met that first threshold or had been granted a workplace accommodation, such as being assigned to remote work or being placed on leave.

The vaccination or accommodation rate among the district’s main employee groups at that time — when workers only had to have received one vaccine dose — were 99.4% for Associated Administrators of Los Angeles, which represents principals and other school site administrators; 98.5% for the teachers union, which represents counselors, school nurses and other certificated staff besides teachers; and 95.4% of California School Employees Association members, which represents clerical and office workers.

On Monday, Nery Paiz, the head of the administrators’ union said he believed that just five of the 3,000 members his organization represents — or 0.2% of the members — had yet to comply or been granted an accommodation

Lt. Rob Taylor, president of the Los Angeles School Police Management Association, said all but three employees in his organization are now completely vaccinated. The three individuals who haven’t complied are recovering from work-related injuries and won’t be required to get their shots until they’re supposed to come back to work, he said.

The district’s mandate does allow for medical or religious exemptions.

School board member Jackie Goldberg told KNX Newsradio that workers who miss the Monday deadline and are terminated will still be able to get vaccinated and possibly get their jobs back.

“Even if they’ve been dismissed, if they get vaccinated and they apply to be rehired within a certain period of time, if there’s a vacancy in their field, which there very well may be, they will be rehired,” she said.

The district also faces at least two other lawsuits over a similar vaccination mandate for students.

Children 12 and older will be required to get their first vaccine dose by Sunday and their second by Dec. 19, ahead of the start of second semester in January.