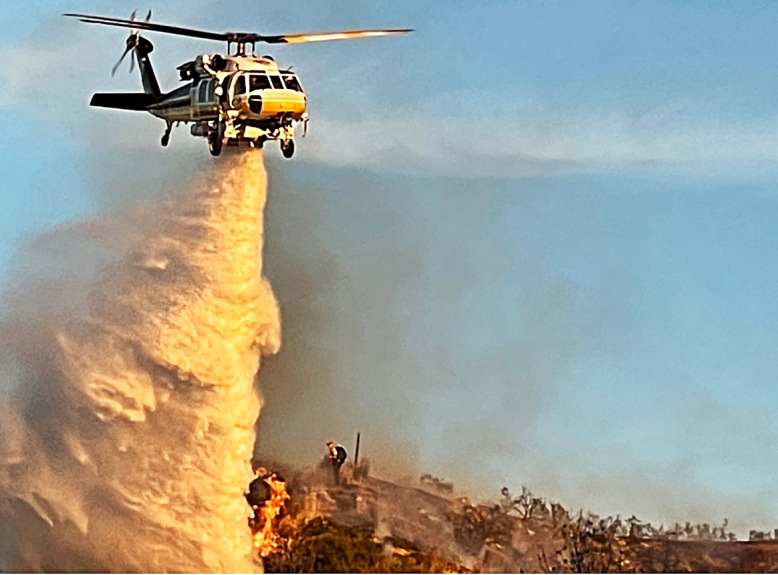 A fourth man injured in the blast had driven himself to a hospital emergency room, but the extent of his wounds was not known, said Jonathan Matheny, a spokesman for Los Angeles County fire.

As of late Tuesday evening, the three critically burned men were expected to survive, Matheny said.

The location of the explosion had previously been described as a movie set, though county fire officials and sheriff’s investigators later determined there was no evidence of filming during the incident, describing the blast as an “industrial accident.”

Authorities received calls around 4:45 p.m. about the explosion on the 2500 block of Rye Canyon Loop, an industrial and residential area, said Supervising Dispatcher Martin Rangel with the Los Angeles County Fire Department.

Minutes later, callers also reported seeing smoke on a nearby hillside, Rangel said. County fire crews found a 1/4-acre of flames burning uphill, but were able to halt the fire’s spread at one acre.

Flames were visible from homes located at the foot of the hill, according to videos taken by residents and posted to social media. County fire helicopters flew overhead to drop water onto the fire.

The blast itself occurred adjacent to a business that held a series of large metal storage containers and semi-truck trailers, Matheny said. Sheriff’s bomb squad investigators and fire crews remained on scene until late Tuesday evening.

The circumstances of what triggered the explosion and the relationship between the wounded men and the business were not immediately clear.

Investigators determined the point of ignition, where the brush fire started, was at least 100 feet away from the blast site, Matheny said.

“So whatever and wherever it happened, by it sparking a brush fire over 100 feet away, that was some sort of powerful force,” Matheny said.

The initial reports that had indicated the blast had taken place on a movie set may have been misinformation relayed to dispatchers, among the more than 50 calls for this incident, Matheny said.

“There is no evidence that leads us to believe it was a movie set, or there was any movie shoot,” he said.

The industrial park on Rye Canyon Loop is home to a large assortment of businesses such as biotech facilities, a veterinary school, an RV storage lot, and a brewery.