3 LAPD employees face firing after refusing COVID-19 vaccines or testing, while thousands of others agree to plan 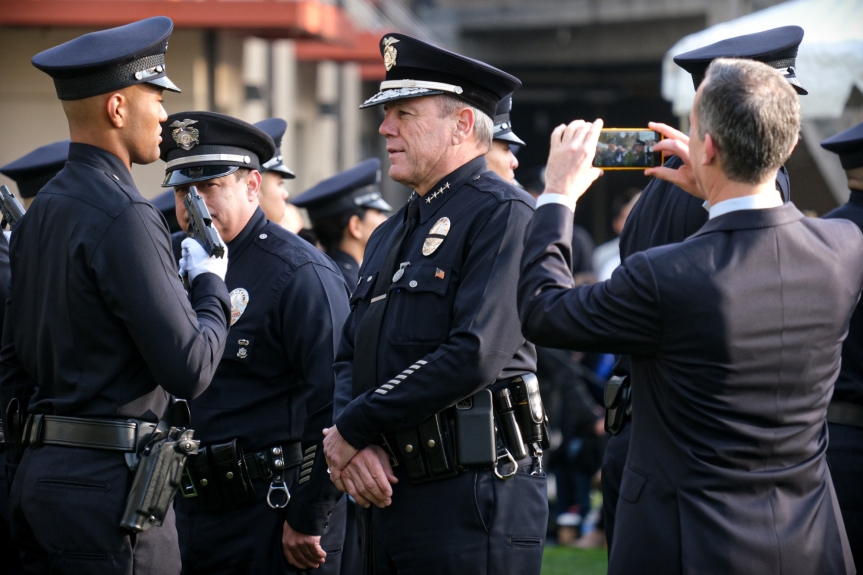 The Los Angeles Police Department has placed on leave at least three employees who refused to either get vaccinated against COVID-19 or follow the city’s requirement to get tested weekly.

LAPD Chief Michel Moore told police commissioners Tuesday that the three — a pair of sworn officers and a civilian employee — were a tiny fraction of the thousands of department employees who were asked last week to sign agreements to follow the city’s vaccination mandate.

LAPD supervisors are personally approaching the employees who have not agreed yet to the city’s mandate and asking their intentions.

“Our desire would be to have all of (the remaining) notices served forthwith,” Moore said.

L.A. city employees have until December to get fully vaccinated. Under plans hashed out with the city’s unions, those employees with legitimate medical or religious reasons for not getting vaccinated are still required to get tested weekly. And they have to pay for the tests.

Moore said 2,239 LAPD employees had sought such exemptions, which are still subject to review and approval by city administrators. Some might have since chosen to get vaccinated.

On Tuesday, Moore and police commissioners indicated they were confident the mandate was working. The department’s vaccination rate now stands at 78%, with that percentage of employees having received at least one shot.

The surge in vaccinations among LAPD employees comes after the department appeared to lag for months behind other city agencies. In September, Police Commission President William Briggs harshly criticized officers who still hadn’t been vaccinated, saying as employees in public-facing roles they “endangered” L.A. residents.

On Tuesday, he was far more upbeat.

“We are taking strides — not steps — strides in the right direction,” Briggs said.

Moore said the department’s mobile vaccine clinic had gotten shots to thousands of employees so far — at least 1,500 since the program was started over the summer in response to LAPD’s lagging vaccination rate.

He said in just the last week, 429 employees have used the mobile clinics. That number included more than 170 officers and civilians getting vaccinated for the first time, and others who got their booster shots.

“We want to make sure we don’t lose anyone (else to the virus),” Moore said, “and that they don’t lose their career over something emotionally charged.”

Of the three employees who refused, all have been assigned to home, Moore said. They will face administrative hearings to determine whether they’ll keep their jobs.

LAPD didn’t identify the employees. But one, Mike McMahon, a 14-year veteran of the department, said in an Instagram video on Saturday, Nov. 6, that he had his gun and badge taken away last week after he refused to sign the agreement.

“I did just leave the captain’s office not too long ago,” he said. “I did refuse everything. I was subsequently relieved of duty, returned my gun, my badge, my police ID. All of my police powers have been suspended and I have been assigned to home, pending a Board of Rights, for which is essentially going to be an insubordination charge, which will ultimately result in termination from the department.”

McMahon said he is part of a group of officers called Roll Call 4 Freedom, which opposes the mandates for L.A. city employees. McMahon appeared at a protest on Monday, Nov. 8, at Grand Park in downtown Los Angeles, speaking to a large group of vaccine opponents.

Union leaders said last week that officers who refuse to get vaccinated would not face insubordination charges. Rather, they’ll be judged on whether they’re fit for duty, a less serious charge than insubordination. If they’re found unfit and fired, they could still return to LAPD if they later get vaccinated.