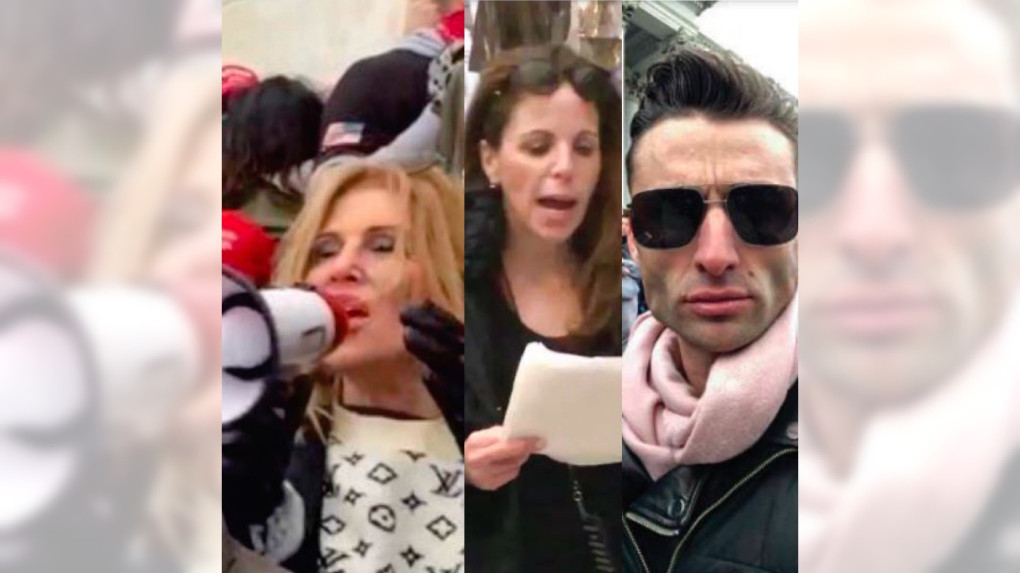 A Beverly Hills salon owner and a prominent anti-vaxxer physician and her spokesman were charged in federal court Tuesday with participating in the violent takeover of the U.S. Capitol by a mob of supporters of President Donald Trump.

Video of the Jan. 6 siege showed Bisignano among the front ranks of the mob violently attempting to push its way past Capitol police officers and into the Capitol building, a special agent with the FBI said in court documents. Another video purported to show Bisignano speaking through a bullhorn atop the Capitol steps, rousing members of the mob to storm the building.

“Everybody, we need gas masks…we need weapons…we need strong, angry patriots to help our boys,” Bisignano said in the video, according to court documents, while other members of the mob physically assault officers blocking the Capitol entrance with what appeared to be a baseball bat.

Another video shows Bisignano continuing to incite the rioters who were seen striking officers with what appeared to be a baton, spraying them with a fire extinguisher and hurling objects at them, court documents said.

The presence of Gold — a physician known for spreading misinformation about COVID-19 and openly protesting coronavirus vaccines and government shutdowns throughout the pandemic — at the Capitol on Jan. 6 was also captured in videos taken by surveillance cameras as well as members of the press, a special agent with the FBI said in an affidavit and warrant for their arrest.

Bisignano, Gold and Strand are among the more than 80 people across the country arrested by the FBI since the riot, which left five people dead, including a Capitol police officer. Among those taken into custody include local government officials, police officers, firefighters, teachers and business owners. The Justice Department said many of those rioters descended on the seat of the legislative branch of the U.S. government to stop a mostly ceremonial vote confirming state-by-state results in the 2020 presidential election won by former Vice President Joe Biden.

Tens of thousands of people attended a pro-Trump rally where President Trump continued to call the 2020 election a fraud, despite a lack of evidence to support such a claim, and roused the crowd by saying, “if you don’t fight like hell, you’re not going to have a country anymore.” The audience chanted “Fight for Trump,” during his speech. About 1:30 p.m., thousands from the crowd later made their way to the Capitol.

At least three Los Angeles Police Department employees attended the rally. A deputy with the L.A. County Sheriff’s Department may have taken part in the attempted insurrection, according to Sheriff Alex Villanueva.

Bisignano, owner of Gina’s Eyelashes and Skincare in Beverly Hills, faces charges of civil disorder, destruction of government property, aiding and abetting, obstruction of an official proceeding, entering a restricted building or grounds, and violent entry or disorderly conduct, according to a federal criminal complaint.

Gold and Strand face charges of entering a restricted building or grounds and violent entry or disorderly conduct, another federal criminal complaint said.

After their Monday morning arrests, Gold and Strand were both held with Santa Ana police, who contract with the FBI, Eimiller said.

In federal court, Strand was unable to meet conditions of a $20,000 bond set by a judge and remained in federal custody on Tuesday evening, said Thom Mrozek, spokesman for the U.S. Attorney’s Office.

Those released will be under house arrest, Mrozek said.

Several days after the attack, six tipsters contacted the FBI, identifying Bisignano, the agent said. In one video referred to in court documents, Bisignano can also be heard repeatedly stating her name, her city of residence and Instagram handle.

Images of Gold, and her spokesman, Strand, were among the initial wanted posters released by the FBI and widely circulated online, soon after the insurrection. Through various tips and a witness who claimed to know Strand, FBI agents were able to identify the pair, court documents.

Strand tweeted several times on his personal Twitter account, suggesting his presence at the Capitol, including a selfie taken on the building’s steps amid the mob, along with a separate Jan. 6 tweet, announcing that he “was there” and claimed the incident “was not violent.”

Court documents quote a Washington Post article in which Gold said she was at the Capitol and said “it most emphatically was not a riot.” Gold said she entered the building, following a crowd, thinking it was legal to do so. Later in the article, Gold is quoted saying, “I do regret being there.”

Last year, Gold — founder of the group America’s Frontline Doctors — promoted the drug hydroxychloroquine as a coronavirus treatment despite evidence that it is not effective and causes serious side effects. She has also raised unfounded concerns about COVID-19 vaccines, which she has called an “experimental, biological agent deceptively named a vaccine.”

Strand is the communications director of Gold’s group, which gained national attention last July when she and other physicians appeared in front of the Supreme Court to decry pandemic lockdowns and criticize government efforts to stop the spread of the virus. Video of the event organized by conservative activists went viral after being retweeted by President Donald Trump.

Last week, a Glendora man was arrested and charged in the District of Columbia with one federal count each of damaging or destroying government property, obstruction of an official proceeding, and violent entry and disorderly conduct on capitol grounds, according to the U.S. Attorney’s Office.

Hunter Allen Ehmke, 20, made his initial court appearance Thursday before a Los Angeles magistrate judge, who granted the defendant’s release on a $40,000 bond, and ordered him to appear in federal court in the District of Columbia on Jan. 21.

Ehmke allegedly attempted to break a window at the Capitol during the takeover.