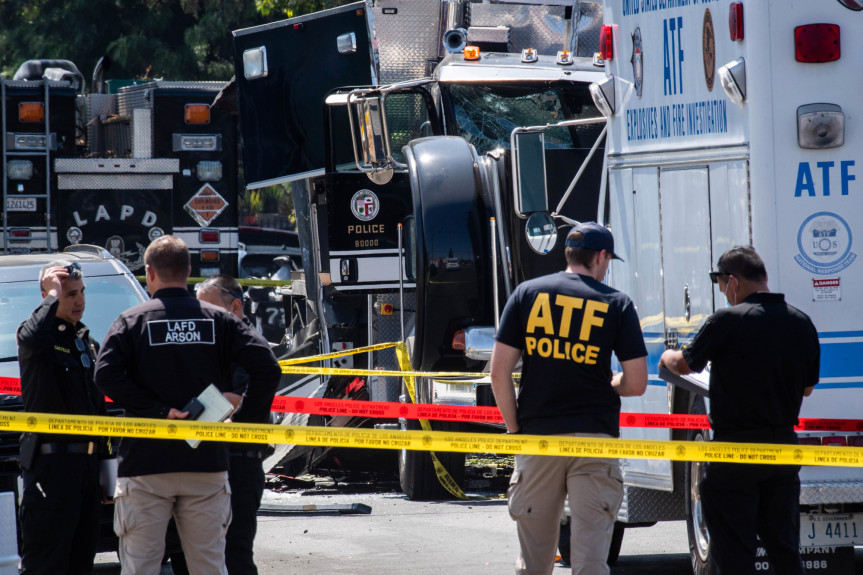 It’s been more than a month since a botched detonation of illegal fireworks by the Los Angeles Police Department’s bomb squad tore apart a neighborhood in South L.A., scattering residents and leaving them unsure when they’ll be able to return home.

At least 88 residents remain displaced, LAPD officials said. All of those people are living in apartments rented for them by their city councilman, Curren Price. There are uncounted others living in hotels or with family.

This week, some of those residents — their homes and apartments still boarded up and empty — expressed their rage at the city and LAPD during a news conference Monday. Activists and frequent LAPD critics similarly let the Police Commission have it during their Tuesday meeting.

Their ire was piqued over the deaths of two men who were longtime residents of that 27th Street neighborhood. Both men were elderly with health issues, and died following their displacement.

Neighbors and family members said they believed both men, while not seriously injured in the explosion, died as a result of the stress of the ordeal.

Auzie Houchins, 72, died on July 22, according to his longtime partner, Lorna Hairston, who spoke to reporters on Monday. Before the explosion, he was confined to a wheelchair.

“It was just too much, too much,” Hairston told Spectrum News Channel 1. “He’s not the kind of man to accept any change.”

On Monday, Ron Gochez of Union del Barrio, a South L.A. based community organization, said Ramon Reyes was the other man who died. It wasn’t clear if he was seriously injured, but they said he was inside his home when the roof started to collapse from the force of the explosion.

Some money has been made available to the victims of the blast: Price’s office announced a $1 million fund for displaced residents last month. But residents and activists said they were frustrated at the seeming lack of urgency from city government. A group of residents have already filed a claim with the city over the explosion.

“Do not make these residents wait for their money. Do not make them turn in receipts,” one speaker said in the Police Commission meeting. “They do not have the money to deal with the damage that you created … This is your fault. You need to pay them up front.”

In his weekly report Tuesday, LAPD Chief Michel Moore at first did not mention the report of the deaths of Houchins and Reyes, though he did so after prompted by a question from Commissioner Maria Lou Calanche.

Moore said LAPD officials “do not believe (the men’s deaths were) the result of the explosion, and were due to more long-standing underlying health issues.”

The chief’s failure to bring up the deaths of the men in his report incensed some of the speakers at the virtual commission meeting.

“That is a classic example of not accepting responsibility. Not even mentioning it is offensive, and that alone should be grounds for Moore to be fired,” said Baba Akili, a long-time L.A.-based activist and an organizer with Black Lives Matter-L.A.

Since she moved to the neighborhood in the early 1990s, Maria Velasquez got to know both Reyes, who lived across the street from her, and Houchins, who lived houses down. She described both as longtime block residents known among neighbors as kind men.

When she was young, Velasquez said, she’d see Houchins take a stroll around the block, always stopping to greet her and ask how she and her family were doing.

Velasquez, who along with her daughter, sister and parents, remain displaced by the June 28 blast and are living in a downtown Los Angeles hotel, said she knows firsthand the toll of stress caused by the explosion. She said it could have been the stress from the tragedy that led to Reyes’ and Houchins’ deaths.

“Come on — they worked so hard for their houses,” Velaseuz said. ‘Within minutes, to have their homes blown away. You don’t play with those kinda things — people’s health.”

Velasquez just received word that she and her family were among those to receive $10,000 from Price’s emergency fund. Yet she still feels it’s up to the city to cover the repairs to her home, which she said has structural damage.

The grant money, she said, will be saved for another emergency, in case she is ever displaced from her home again.