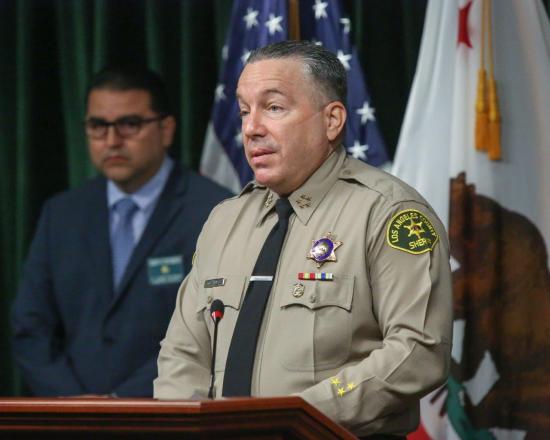 Los Angeles County supervisors are set to consider on Tuesday, Oct. 27, how they might try to oust Sheriff Alex Villanueva from his post before voters go to the polls in 2022.

Supervisors Mark Ridley-Thomas and Sheila Kuehl have recommended that the board round up its lawyers, inspector general, civilian oversight commissioners and acting CEO to look at options for removing or impeaching the sheriff.

“Under the current sheriff, hard-fought vital progress is being undone, and community trust is rapidly eroding,” their motion states.

“While the board has been able to navigate challenging times with previous sheriffs, this sheriff’s actions demonstrate the dire need to explore options for removing a sheriff who refuses oversight or, at a minimum, mitigating damages cause by unacceptable behavior,” it says.

The board has sued the sheriff in order to insist that a deputy terminated for misconduct not be reinstated by Villanueva. The sheriff has sued the inspector general, accusing his staff of illegally accessing department documents.

As the board prepares to vote on the motion by Ridley-Thomas and Kuehl, it is also scheduled to consider other motions that highlight its broken working relationship with the sheriff.

One motion seeks an investigation by the inspector general into the recent shooting of a patient by a deputy at Harbor-UCLA Medical Center.

Another calls for the release of body-camera footage and a coroner’s inquest into the fatal deputy shooting of 25-year-old Fred Williams in South Los Angeles earlier this month; the Sheriff’s Department says Williams pointed a gun at the deputy.

Ridley-Thomas and Kuehl’s motion anticipates asking the group to determine the full scope of legal changes, including amending the state Constitution, that would be required to move to an appointed, rather than elected sheriff.

The board motion comes after the civilian oversight commission called for the sheriff’s resignation, unanimously approving a resolution concluding that it had “lost confidence in Sheriff Villanueva’s ability to effectively govern the Sheriff’s Department. He should resign immediately.”

Villanueva has dismissed the commission as a political tool and accused the group of punishing him for investigating potential corruption.

Further, the sheriff has said the board has forced him into the position of cutting programs to protect the most important elements of public safety. He has long accused the board of failing to give him a chance to succeed, pointing to its endorsement of his opponent as evidence of alleged animosity toward him.

Ridley-Thomas and Kuehl will need just one more vote to pass their motion, though additional support – including among state legislators – would likely be needed to actually implement any substantial changes.

The motion calls for a report back in 30 days.