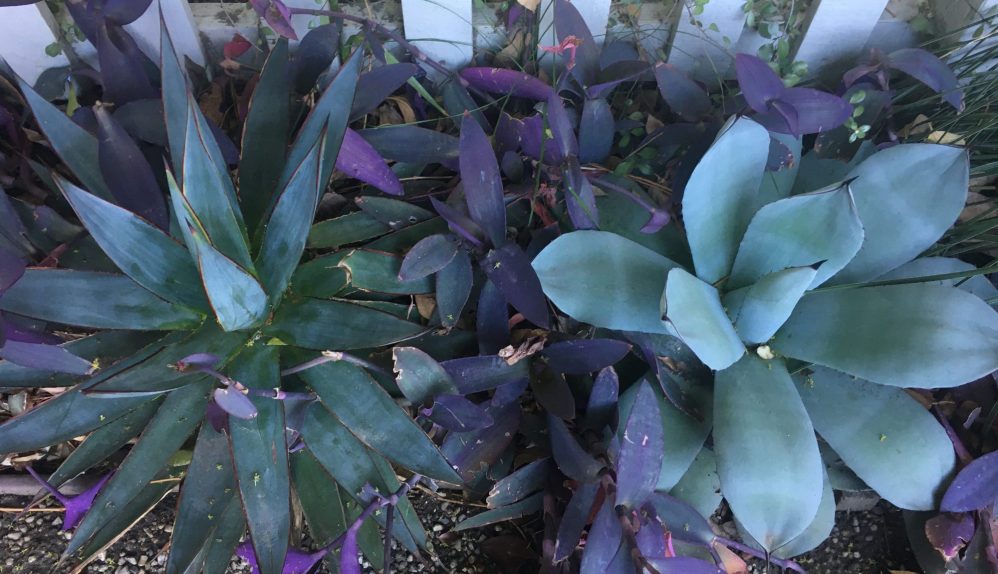 It often happens to me that I see a plant from a certain botanical family and then a short time later see one of its relatives. This gets me thinking about all the other plants in that family that I have known. Call them horticultural friends. The most recent plant family of this sort that I encountered was the spiderwort family (Commelinaceae). Spiderworts are so named because “when the stems of spiderworts are cut, a viscous stem secretion is released which becomes threadlike and silky upon hardening like a spider’s web, hence the common name,” according to missouribotanicalgarden.org.

“Wort” is an old English word meaning “plant,” derived from an even older Germanic word meaning “root.” More than a hundred plant families have “wort” as a suffix, such as liverwort, lungwort, and bladderwort; parts of these plants were thought to resemble the organs associated with their names and, according to the ancient belief in the Doctrine of Signatures, would cure ailments of those organs. Spiderwort is unusual in this regard since the first part of its name does not refer to a body part.

My spiderwort encounter began the other day when I was walking in the neighborhood and came upon a beautiful arrangement in a narrow planter between a fence and the sidewalk. It consisted of agaves and a spiderwort known as purple heart (Tradescantia pallida ‘Purpurea’). Purple heart has purplish foliage that trails along the ground. I saw this purple heart specimen in an east-facing planter with a weeping fig (Ficus benjamina) tree overhead. This is perfect exposure for it since it thrives in morning sun during the summer and benefits from cold protection during the winter. Purple heart is somewhat frost-sensitive, although a mature plant burnt by a freeze on its outer leaves should survive night temperatures below 32 degrees.

At night, it is always warmest under a tree with dense foliage such as a weeping fig. This fig or Ficus is typically grown as an indoor floor plant where lots of light is available; outdoors, it may suffer in a hard frost but will generally make it through Los Angeles winters unscathed. In an open exposure, the heat of the sun’s rays absorbed by the ground during the day radiates upwards and escapes into the sky during the night. However, an overhead tree with dense foliage such as this one will not allow the heat to escape, to the benefit of the plants below.

In a brilliant combination of plants, the purple heart I gazed upon meanders around two low-growing agave species. One of them is Agave ‘Blue Glow,’ a hybrid, which reaches only two feet tall. Its blue leaves are edged in a tone of purple that exactly matches that of purple heart foliage. Artichoke agave (Agave parryi var. truncata) is the companion agave in this planter. It is also low in stature and its gray color is a fitting complement to the adjacent blue and purple. Both agaves are hardy down to 20 degrees Fahrenheit if not colder. These agaves are also excellent choices for containers due to their slow growth rate and minimal water requirement.

To appreciate the diversity of the Agave genus, I recommend visiting the website at smgrowers.com. Type “Agave” into the plant database search box on the upper left-hand corner of the home page. You will be taken to a list of 194 Agave species and varieties, whose images come up when you click on the names of the Agaves on the list.

And then I was driving through Westwood the other day and took the opportunity to visit the Mildred E. Mathias Botanical Gardens. This is one of the hidden gems of Los Angeles where exotic plants are concerned. Because of the botanical fare on display, much of it not to be found anywhere else in California, four visits a year are justified, one in each season, to make sure none of the flowers are missed. On this particular visit, I was dazzled by a blue ginger (Dichorisandra thyrsiflora) inflorescence.

Blue ginger is not a true ginger, despite the resemblance of its flowers to those seen on certain ginger species. In fact, it is a spiderwort. Its flowers last for months and may appear throughout the year. Sensitive to cold, blue ginger is commonly grown as an easy-care indoor plant for bright light. In the manner of spiderworts generally, it is propagated simply by taking cuttings at least four inches in length, removing the bottom leaves, and placing the cuttings in a glass of water. The flowers of blue ginger may persist for months and the plant may bloom on and off throughout the year. Readily available from online vendors, blue ginger is somewhat pricey but worth the investment when you consider that you can propagate it without difficulty and you will have as many bluegingers as you want for protected garden spots and interior decoration.

Speaking of blue-flowered spiderworts, I would be neglectful to overlook the tropical dayflower (Commelina benghalensis), so-called since its flowers fade after one day. Although considered a weed, it is highly ornamental with deep green, ovate leaves and sky blue flowers. Worldwide, however, tropical dayflower is a highly destructive weed, having a severe impact on crop production. Like most weeds, tropical dayflower is edible and its leaves may be steamed and consumed as a vegetable. Although not especially tasty, it is relied upon in tropical countries as an emergency food source during periods of famine. In tropical regions of Africa and Asia, its sap is utilized in treating burns and sore throats.

Two years ago, a researcher noticed that a close relative of tropical dayflower (known as spreading dayflower) had foliage that was blighted with a leaf spot fungus. The affected leaves were taken into the laboratory where the fungus was extracted and cultured until a sufficient quantity was produced for spraying on the spreading dayflower. Through use of the fungal spray, significant containment of the dayflower was achieved.

Although this product is not yet available for commercial use, and it is not known whether it would be effective on other dayflowers, it is reasonable to assume that such products are part of our future. Pathogenic bacteria, plant viruses, and microscopic worms (known as nematodes) that feed on leaves, roots, or seeds have already been introduced as biological control agents for halting the proliferation of certain weeds.

Biological weed control is not new. Nearly 2,000 years ago, the Chinese brought nests of yellow citrus ants into mandarin orchards to control caterpillars and beetle borers. And today the Chinese use other kinds of ants to deter insect pests in rice paddies and sugarcane fields.

An Australian story of biological control of an unwanted plant is similarly illuminating. By 1925, the build-up of prickly pear cactus (Opuntia ficus-nitida) had become treacherous and hundreds of square miles of prime grazing land had been consumed and made inaccessible by the thorny cactus. In a desperate attempt to slow its spread, a lepidopterous prickly pear cactus pest from South America was shipped to Australia. Soon, its larvae began to feast on the succulent pads of the cactus. Today, only 1% of the original prickly pear cactus remains.

Tip of the Week: White velvet (Tradescantia sillamontana), a Mexican native, is a highly drought-tolerant trailing spiderwort species that craves fast-draining soil and good light. It is ideal for hanging baskets that are infrequently watered since its hairy foliage insulates it from summer heat. Its pink flowers are a bonus. Hairy flower spiderwort (Tradescantia hirsutiflora) grows less than two feet tall with blue flowers and spreads generously throughout the garden. Both of these spiderworts are easily propagated in water from stem cuttings.