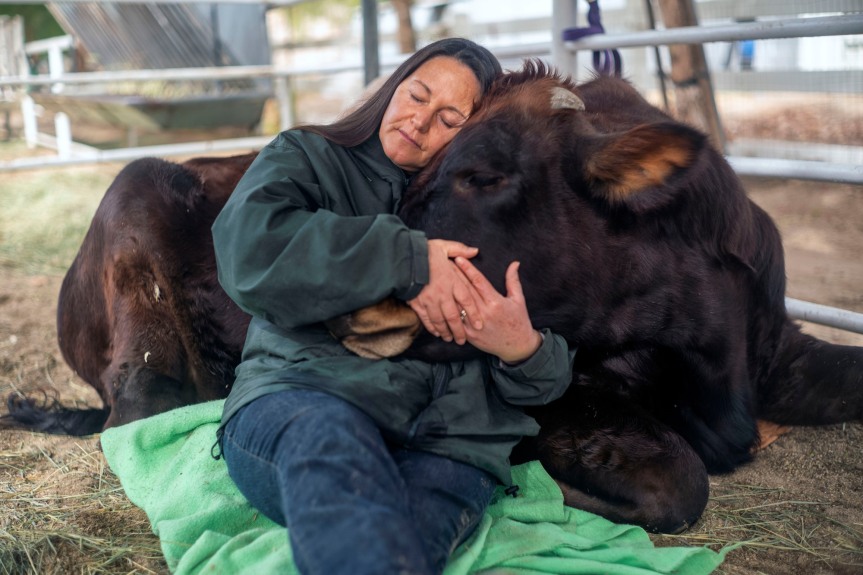 Tears ran down the face of Sarah Castro as she hugged Athena.

It was a cool afternoon, and she had waited years for this moment. She placed her face against Athena and squeezed her girth firmly.

Athena did her part, laying peacefully on the dirt, soothing and calming Castro.

Athena is one of the therapy cows at Gentle Barn, an animal rescue in Santa Clarita. Ellie Laks, who founded the Gentle Barn in 1999, believes that cows have the power to heal people, and she sees it every day.

Sarah, who works in a school’s front office, and her mother Nora Castro drove six and a half hours from their home in Sacramento to experience a bit of this bovine bliss.

“I googled hugging cows, and this was the closest place to me, so we had to come,” she said, having become obsessed with cows six years ago.

Sarah stood in the parking lot, visibly shaking from the excitement of getting to spend some up-close time with the bovine. Laks gave them some cow-hugging pointers before opening the gate and inviting the pair into the enclosure.

The cows were ready.

“This is Athena,” Laks said, introducing the cow to Sarah.

Sarah sat down, placing her arms around the animal, resting her head on her to hear her heartbeat. Her eyes were closed, a smile and tears on her face as she hugged a cow for the first time.

“It’s more than I could have imagined. I don’t even know how to explain it. Like when you hug them, you just feel their love; it’s amazing, peaceful,” she said.

It had been a dream for Laks since she was 7 years old.

“I was born obsessed with animals like I think we all are, but I never lost that attachment to it,” she said. “I was going through challenges growing up, and it was always animals that I could cry to. Animals that gave back to me that I had value and worth and animals that made me feel like I was going to be ok. So I know the value that animals have; they have saved my life many times.”

The concept started with Buda more than 20 years ago.

“I got Buda because she was going to go to slaughter, and we were rescuing farm animals, so we got our first cow,” Laks said. “I had no idea that cows hugged or healed, but she healed me. She got me through the origins of the Gentle Barn in the early years, so that is how I discovered cow hugs from Buda.”

Living in Tarzana, Laks would lay against Buda after a stressful day. “It made everything better.” Laks wanted others to experience the power of cow hugs.

Laks has been encouraging people to hug cows for 23-years, and she has seen the power of cow hugs many times.

There was a troubled teenaged girl that needed help. She was living in foster care and was having a difficult time. “The first time I met her, she wouldn’t look at me. She wouldn’t talk. She was very shut down. She was 17 at the time; we went in to see the cows. Our baby cow John Lewis ran over to her, he was licking her, he was chewing her hair, and he was being all silly cause he’s a baby. She started laughing, she completely opened up, she looked at me and started asking questions, she asked about his story, she asked about his personality.”

The girl came, again and again. She groomed horses, played with pigs. By the third time, she was telling Laks about herself, her feelings, her life, and what she was going through. “She completely opened up because of these cows.”

The animals at Gentle Barn have all come from terrible situations. Abused, neglected, starved, or sick, they all started their lives in the worst of ways. John Lewis was born on the floor of a slaughterhouse as his mother waited to be killed.

“They let us have him but not his mother,” Laks said.

They rescue animals from everywhere and then they help them heal before they help people heal. They take animals that have nowhere else to go. Horses, cows, pigs, sheep, goats, chickens, turkeys, peacocks, llamas, dogs, cats, and emus are just some of the creatures that have found sanctuary at the Gentle Barn.

“The come scared and angry, and we put them through their recovery. Once they heal, leave their past behind them; they are so lovable,” said Laks. They work with veterinarians and give them therapy, nutritional supplements, and love to help them overcome past traumas. They work with anyone that finds animals that no one else wants.

“Their love, their energy is just so strong,” Sarah said of her experience. When asked if it had a calming effect on her, she replied, “for sure.”

Two of the cows, Holy Cow, and Madonna were named by television talk show host Ellen DeGeneres and spouse Portia de Rossi during a visit to the Gentle Barn several years ago.

Laks believes that the world would be different if we all just hugged cows. Suppose we looked at cows as love, not food. “If we could only be like them instead of eating them, I think this planet would be a very different beautiful paradise.”

As the Castros and Laks left the docile cows after another rewarding cow hugging session, Laks paused.

“Thank you,” she said as she individually thanked her four-legged 1,500-pound friends, one by one, each by name, before closing the gate.

The Gentle Barn is open by appointment and each Sunday for the public to visit. The animal sanctuary has other locations in Nashville, Tennessee, and St Louis, Missouri. For more Information on the Gentle Barn: https://www.gentlebarn.org/