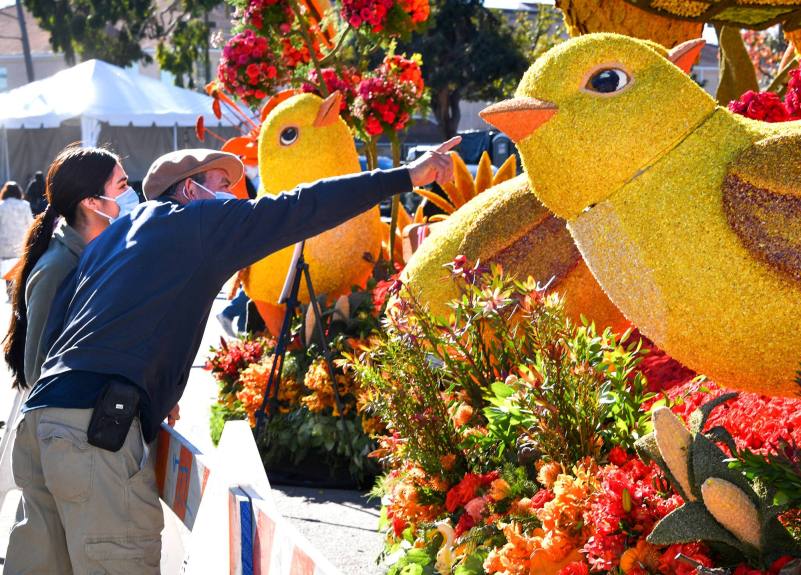 Tourists from around the globe descended upon Pasadena over the weekend for one last chance for a glimpse of the larger-than-life floats that played starring roles in this year’s return of the Rose Parade after last-year’s pandemic-forced cancellation.

Floatfest brought an unofficial close to a Rose weekend like none before it, as the Tournament of Roses, after weeks of considerable anxiety amid the winter COVID-19 surge, pulled off a parade that ran like clockwork while millions watched around the globe.

Across town, a record-shattering 48-45 Ohio State victory over Utah in the Rose Bowl game was no slouch, either. Overnight ratings were not yet available for the game, but the high-scoring affair was an entertaining cliffhanger, truly a relief for officials who were forced to move last year’s game to Texas amid the coronavirus outbreak’s initial winter.

“We are extremely pleased with the outcome of America’s New Year Celebration this year. From an entertaining parade to a most exciting game … we believe that our dreams were definitely achieved,” Tournament of Roses President Bob Miller said on Sunday, Jan. 2.

“I am so grateful to our 935 volunteers, our staff, and literally thousands of others who delivered this urgently needed gift to our community, country and world,” Miller said.

“We don’t yet have numbers for attendance or viewing,” Miller added. “But our goal was to return these storied events to Pasadena and we have done it.”

The Pasadena tradition returned Saturday after the cancellation of the 2021 parade, its first no-go since World War II. Tournament and local public health and safety officials acknowledged the inherent risks of gathering for the parade and game, but planners said they relied on a feasibility study by USC Keck School of Medicine and strictly aligned with the county’s public health safeguards.

Crowds were visibly smaller than during a pre-pandemic year — with some fans able to wander in for a front-row seat just before launch time — as officials warned high-risk residents to stay home and folks who attended to make sure they were vaccinated and wearing facemasks. The COVID news, meanwhile, continued to be grim over the weekend, with Los Angeles County posting 23,553 new coronavirus cases on Saturday and another 21,000 on Sunday as the highly transmissible omicron variant continued to fuel unnerving caseloads around the region.

Masks were urged at Sunday’s Floatfest, too, which — after a week of persistent rain that soaked Bandfest and Equestfest — was held under clear, blue skies. The shining sun illuminated the steel framing, vegetables and seeds — and, of course, the  trademark florals — that comprised the components of this year’s award-winning creations.

Spectators rolled in for a sneak peek at the towering dragons, stirring wildlife scenes and tributes to health-care workers that united to inspire Rose Parade viewers to “Dream. Believe. Achieve.” – the theme of this year’s parade.

Volunteers who helped make the day happen, some clad in their traditional white jumpsuits, said it felt amazing to see everything come to fruition after last year’s cancellation.

Event organizers didn’t have the official tally of Floatfest attendees but thousands descended upon the Woodland Road to Campus Drive on Sunday afternoon, some still buzzing after watching Utah tumble on a dramatic field goal with only seconds left in the 108th Rose Bowl.

One attendee, Bob Meyers, traveled from the city of Orange to catch a glimpse of this year’s 43 float entries.

Standing in front of The UPS Store’s Sweepstakes Award-winning reading rooster, Meyers enjoyed seeing the precise, impeccably plotted collage of white onions and bell peppers that blended into the vibrant colors of hundreds of thousands of red carnations and roses.

“You just can’t picture that, whether you’re up in the grandstand or at home on the TV,” Meyers said. “And then the detail is just amazing when you’re able to get close and look at everything they use.”

While parade crowds were smaller this year amid pandemic concerns, Crumb didn’t see a major difference in the crowd size at this year’s Floatfest, which he called one of the Rose Parade’s must-see events.

In tight and up close, and with floats not in motion, one can better appreciate the fine craftsmanship that goes into constructing the floats, Crumb said, pointing to the fine lines of lima and black beans that were precisely placed with tweezers to spell out “La Cañada Flintridge” and “Who Says We Can’t” all around the float.

“One of the challenges is you’re trying to get it all to the same level,” Crumb said,

“And you just don’t see that until you’re close up,” Meyers said, noting even the smell was sensational.

As one of six self-built floats in the parade, the La Cañada Flintridge Float Association was responsible for raising all of its own funds, the 20-year volunteer explained.

Despite the pandemic, the number of volunteers boomed for the week of decorating, “which is between Dec 26th and Dec. 31st,” Crumb said. “We can hit as many as 1,000 people.”

Offering a view of the float’s skeletal system, Crumb explained a driver and two observers were responsible for navigating the float down Colorado Boulevard for the 133rd procession. An animator located in a noisy, cramped middle compartment operated the remote-controlled dogs and palm trees near the tail of the 60-foot float.

Ben Crumb has helped design floats for 20 years. He was kind enough to answer all types of questions and give me a personal tour of the award-winning float.

Stay tuned for a look inside and an in-depth look at the details of the 60-foot float featured in this year’s #RoseParade pic.twitter.com/KTiaBw5dat

Crumb mentioned he and his peers are already looking for a design that will wow the crowd for the next parade.

Lakewood’s Meyonce Adams hopes to catch a glimpse of the design on New Year’s Day 2023.

“This was our first time,” Adams said in an interview alongside her three younger sisters. “They were all beautiful and they had so many.”

Feeling accomplished after completing the event’s scavenger hunt and earning a Rose Parade pin, Adams said she missed Saturday’s parade. She had such a splendid time on Sunday, though, and asked her mother to make the day a new family tradition.

Crumb invited families like the Adams to head to Memorial Park on Saturday, Jan. 8 for a free look and up-close interaction at the float, from 9 a.m. to 2:30 p.m.

“They’ll be able to fully interact with the float,” Crumb said, “and even get a view of the inside for themselves.”

As for the weekend, Crumb said, ““It feels great to be back to somewhat normal.”