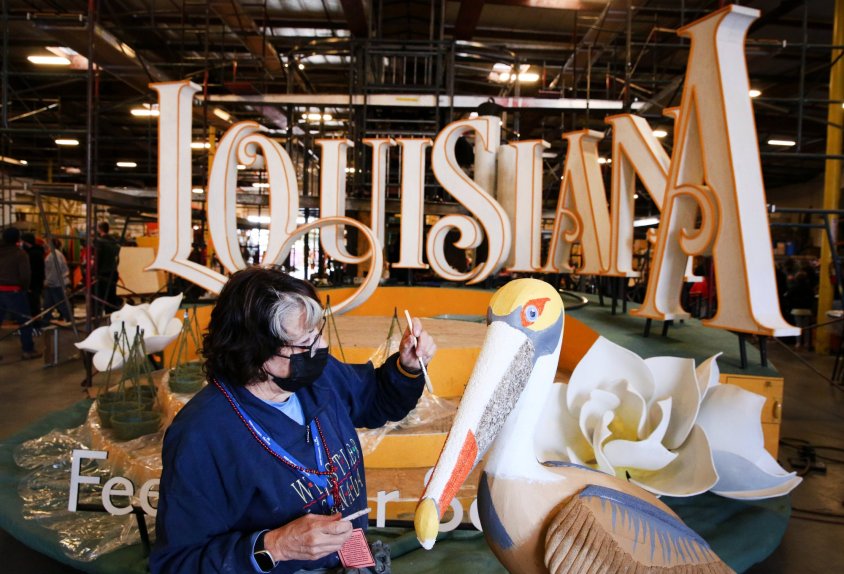 Pasadena city leaders and Tournament of Roses officials once again assured the public  that the 2022 Rose Parade and Rose Bowl still have the green light to happen on New Year’s Day, despite concern raised by the winter coronavirus surge.

However, the Lawry’s Beef Bowl, the annual Beverly Hills feast for Rose Bowl combatants, was canceled Monday — and the players will get takeout meals instead, as a pandemic precaution.

“The Rose Bowl is happening as of today (Monday, Dec. 27),” a statement from the city of Pasadena reads. “Proper protocol is being followed, and we are moving forward.”

The confirmation arrived as Los Angeles County continued to battle rising infection numbers fueled by the swift-spreading Omicron variant. The county reported 7,425 new cases of COVID-19 and nine additional deaths on Monday, with the numbers artificially low due to standard reporting delays from the weekend. Nearly 10,000 new cases were reported Friday, as public health officials expressed concern that the numbers may soar to the highest levels of the pandemic in the weeks ahead.

The seven-day average daily rate of people testing positive for the virus rose to 12.4% as of Monday, more than triple the county’s rate from a week ago, according to the county Department of Public Health. Multiple sporting events, theatrical performances and other activities have been canceled or rescheduled because of the rekindled outbreak.

While acknowledging that they were watching the virus statistics each day, Tournament of Roses officials reiterated Monday that they expect the Rose Parade and the Rose Bowl Game to be held as scheduled on New Year’s Day 2022 in Pasadena.

“We are aware of the rising COVID-19 infection rates, and are monitoring the situation very closely. As we continue to work with the Pasadena Public Health Department in regards to their health order,” a statement reads. “We are confident in our ability to host both the parade and game successfully, and in compliance with all the applicable government protocols needed to keep everyone safe.”

However, the Lawry’s Beef Bowl, during which the Rose Bowl teams dine at the Beverly Hills prime rib restaurant, was canceled Monday “given the growing concerns around COVID-19 and the Omicron variant,” the restaurant announced.

The cancellation was made “out of an abundance of caution and safety of our staff and of the players,” the statement said.

Lawry’s will be packaging and delivering takeout meals for the players instead.

The Rose Bowl teams have annually participated in the Lawry’s Beef Bowl since 1956 except for last year when the game, which was a College Football Playoff Semifinal, was relocated to Arlington, Texas, based on “the growing number of COVID-19 cases in Southern California along with the inability to host player and coach guests at any game in California,” according to a statement from the Pasadena Tournament of Roses.

The Beef Bowl is older than all but the Rose, Orange, Cotton, Sugar and Sun bowls. It is billed by organizers as college football’s most enduring pre-bowl game tradition.

“The purpose of the event is to honor champion student-athletes for their achievement as a team of making it to the Rose Bowl Game,” said Richard R. Frank, the executive chairman of the board of Lawry’s Restaurants Inc., whose late father, Richard N. Frank, conceived the Beef Bowl in 1956, shortly after becoming Lawry’s president.

“The meal is a large part of the celebration because these are young men with enormous appetites, but it’s more about celebrating together away from the practice field in a legendary setting.”

Meanwhile, Public Health Director Barbara Ferrer said last week the county is not immediately considering a return to lockdown or other severe restrictions on public activity, but it will depend on the actions residents take to slow spread of the virus.

Dr. Anthony S. Fauci, the nation’s top infectious disease expert, said this week that a growing body of evidence suggested that the Omicron variant of the coronavirus was causing less serious illness than its predecessors but he warned against complacency and urged Americans to be cautious and follow safety guidelines.

Earlier this month, Pasadena first responders united with Tournament of Roses CEO David Eads on Thursday, Dec. 16, in front of City Hall to ensure members of the public are clear on the safety guidelines for this year’s procession down Colorado Boulevard.

Traditionally, spectators have camped out on Colorado Boulevard in an attempt to snag a prime viewing spot of the colorful floats, boisterous bands and renowned musical acts processing throughout Pasadena. But Police Chief John Perez asked locals and tourists to travel light because 2,000 security-related personnel in the area will be walking the streets with safety on the mind.

“We want you to leave all the big-ticket items behind – no furniture, no couches, no bonfires — all these things that usually we have to clean up,” Perez said. “We are really asking you not to bring those into Pasadena.”

Tournament officials invited residents to purchase tickets to one of the grandstands near TV Corner if they need a place to see the action, but those who do will be required to provide proof of vaccination or a negative COVID test from within 72 hours of a scheduled event. Because the city is unable to enforce mega event standards for non-ticketed patrons, those witnessing the parade further down the route will not have to provide proof of anything.

Eads said he hopes spectators will still do their best to keep the health of others in mind because reducing the spread of coronavirus during and after this year’s spectacle is one of the Tournament’s top priorities.

Tournament of Roses officials added in a news release this week residents with questions about the coronavirus protocols and other Rose Parade-related questions will be able to call Visit Pasadena visitor hotline for information when it launches Tuesday, Dec. 28.

Bandfest and Equestfest will kick off this week’s Rose Parade festivities on Wednesday, Dec. 29, and those expecting to attend the upcoming events should plan to bring an extra jacket because the county’s health officer issued a Cold Weather Alert this week that warned wind chill temperatures will drop below 32 degrees Fahrenheit.

Masks are recommended for Bandfest and Equestfest, both outdoor events, but proof of vaccination or negative test results are not required for spectators.

No matter the weather, officials said the Rose Parade’s equestrian units will be ready to showcase their breeds and demonstrate their talent with performances at Equestfest, an event that is traditionally held at the Los Angeles Equestrian Center, at 480 W. Riverside Drive, Burbank.

Attendees are invited to stroll through the stables this year from 10 a.m. to 3 p.m. for an opportunity to meet equestrian participants and participate in educational and interactive exhibits.

Shortly before the conclusion of Equestfest, young musicians from around the country will make their way to Pasadena City College for the first day of Bandfest, which will begin at 2 p.m. Wednesday.

The musicians will return the Thursday at 10 a.m. and 3 p.m. for the final day of performances before they hit the parade route with Grand Marshall LeVar Burton and Rose Queen Nadia Chung.

The 133rd Rose Parade is set to begin with a special performance by Grammy winner LeAnn Rimes, organizers announced Dec. 15.

Prior to the conclusion of the parade, officials said Dec. 17, spectators can expect a performance by CMA New Artist of the Year Jimmie Allen and Timothy Fletcher, “the drummer who has been making waves on Instagram and Tik-Tok with magical beats,” according to a news release.

Locals can still catch the performances even if you’re expecting to travel no further than your sofa this year.

Leeza Gibbons, Mark Steines and Micah Ohlman will host on KTLA, starting at 8 a.m. PST. Also airing the parade are Univision — in Spanish — as well as ABC, NBC, Hallmark Channel and RFD-TV.

You can watch also all three Bandfest sessions streamed live on the Tournament of Roses’ Youtube account.