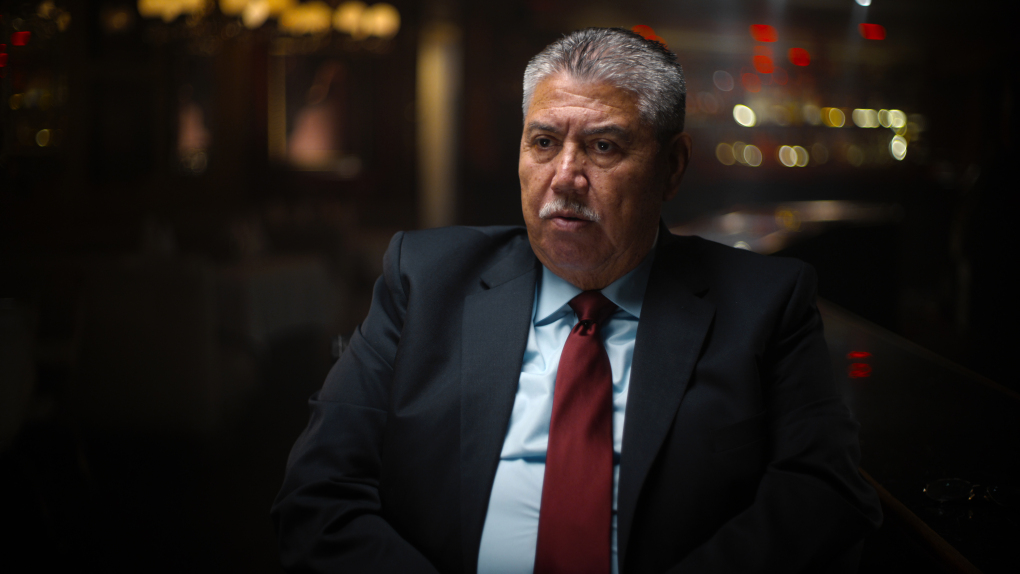 Director Tiller Russell says there are times when he views all of the documentary, film and TV projects he makes as chapters in the same saga.

“In some weird way or another, it’s all kind of the same movie,” says Russell, whose projects range from the 2019 docuseries “The Last Narc,” which explored the cartel murder of a DEA agent, to 2014’s “The Seven Five,” which took a deep dive into the corrupt past of a New York City police precinct.

“I am, I guess, magnetized to these stories about the criminal underworld and law enforcement, and sometimes the thin and porous line between the two.”

And increasingly these stories find him, he says. In the case of his new Netflix docuseries “Night Stalker: The Hunt for a Serial Killer,” which arrives on the streamer on Wednesday, Jan. 13, this happened a few years ago during a conversation with a friend and fellow writer on the “Chicago P.D.” TV series.

“He came to me and said, ‘I met this homicide cop who worked the Night Stalker case, and I think there may be a documentary in this — you want to go to dinner with this guy?’” Russell says. “And I said, ‘Absolutely!’”

At Monty’s Steakhouse in Woodland Hills, Russell met retired Gil Carrillo, a retired Los Angeles Sheriff’s Department homicide detective, and over the next few hours listened as Carrillo vividly described the long, hot summer of 1985 when Southern California lived in terror of a killer who came in the night, the deadly phantom later identified as the serial killer Richard Ramirez.

“As he began to unfurl the tale of what that summer was like, I just thought, This is an amazing, incredible story,” Russell says. “When I saw how great of a character he was, and then met his partner, Frank Salerno, I just thought, Wow, this is an iconic L.A. crime story in that continuum of L.A. crimes stories from Raymond Chandler to James Ellroy.”

“It seemed like an amazing opportunity to author a piece of history where you know the headline, you know the name, but what’s the human story behind it?”

Carrillo captivated Tiller that first night with the stories he told and the way he carried himself.

“Sitting there in Monty’s, it was like, ‘Wow, look at this face,’” the filmmaker says. “This guy’s got this unusual, yet sort of weirdly beautiful, weathered, lived-in, but also kind of boyish face.

“And then the vividness with which he could recall what happened that summer, down to addresses, times of day, what people were wearing. I mean, the precision was astonishing.”

The refreshingly down-to-earth Carrillo is unlike some of the outsized personalities Russell has explored in past documentaries, such as “Operation Odessa” in which a Miami mobster nicknamed Tarzan arranged the sale of a Soviet submarine to a cocaine cartel.

“It was funny, Gil said to me, ‘I’m boring. Why do you think you could possibly make an interesting story about me?’” Russell says.

What Russell saw, though, was a man who could let himself feel the pain and emotions of the terrible crimes he investigated.

Anastasia Hronas, who appears in the documentary, was 6 years old when in 1985 she was kidnapped and assaulted by Ramirez. Decades later, Carrillo was still so moved by her bravery, picking Ramirez out of a police lineup, volunteering to testify to protect other kids from her monster, that Russell says he knew the detective would move viewers, too.

Salerno, already a legendary homicide detective for his work on the Hillside Strangler serial killings a decade earlier, had picked the younger, greener detective Carrillo as his partner not long before the Night Stalker killings began.

Salerno’s a major presence in the Netflix series too, though his emotions are much more closely guarded.

“As you can see, Gil wears his heart on his sleeve, and Frank, he’s a pretty smooth customer,” Russell says. “He said he can turn out the lights when he’s done with a job. Click it off, which is amazing in its own right.

“There was a moment in time when they came together, and it was the perfect pairing of skills, talents, personalities, differences and distinctions,” he says. “And they fit. They made a perfect whole.”

Unlike some true-crime documentaries, the focus of “Night Stalker: The Hunt for a Serial Killer” isn’t on the killer so much as on those whose lives were changed by the murders, which numbered at least 14, as well as the many rapes, assaults and other crimes committed between April and August 1995 by Ramirez, who died of natural causes in 2013 while on Death Row.

“Choice of perspective ends up being one of the most defining decisions that gets made,” Russell says of the documentary filmmaker’s approach. “If you didn’t carry the gun, kick the door, move the body, put the handcuffs on, whatever, you’re not in the movie.

“That begins to make it sort of personal and intimate and specific,” he says of the role of the detective protagonists. “They were shining a little light into a vast dark night, illuminating it piece by piece.”

In addition to Carrillo and Salerno, the film includes a criminalist who worked many of the crime scenes, journalists who covered the killing spree and manhunt, and a librarian who chillingly recalls Ramirez asking where to find books on horoscopes and torture.

The documentary also includes interviews with survivors of attacks and family members of victims, all of whom are given more prominence than Ramirez, whose face isn’t seen except in police composite sketches during the final episode of four in the series.

“For whatever reason, in the aftermath of the story Ramirez became this object of desire and sort of sex object, a sort of fetishized character,” Russell says. The docuseries includes a montage of love letters and risque photographs sent to Ramirez during his trial to underscore that point. “And it was really crucial to us that we’re not doing that. This guy is not a hero. There’s nothing cool about him.”

Including material about the child abductions and molestations was intentional because public memories about those have faded, he says.

“Stare that in the face as an audience member and contend with that,” Russell says. “Strip away any, like, ‘This guy’s the Jim Morrison of serial killers.’ This is a piece of (garbage) predator who deserves to die in prison.

“Not to make judgments and be rough about it, but it was very important to have those survivors come forward and articulate their incredibly painful, visceral, vivid memories of what happened to them,” he says. “And also to give them the platform to say that this did not define me. I am not a footnote in Richard Ramirez’s biography.”

The Night Stalker moved through the city in the dark, and so, too, did Russell and his film crew, shooting nearly every interview at night to capture the nocturnal feel of the stories the interviewees shared, with director of photography Nicola Marsh capturing evocative moments in the dim lights of restaurants and bars, and the shadows of streetlights.

He also chose vintage tools to capture a sense of 1985. Drones, which are ubiquitous in filmmaking today, were grounded in favor of cameras on helicopters. Settings were chosen for their links or looks from the past. It is, in many ways, a documentary shot as a film noir.

That look and feel carries through to the final moments of the series when Carrillo, sitting alone, reveals how he’s kept these memories alive, and how he remembers not just the victims in his prayers, but the killer himself, too.

It’s a startling moment for the viewer, and Russell says it shook him, too.

“It was one of the last things. I asked him, ‘Talk to me about God, and your relationship to God, and your prayers,’ not having any idea where it would go,” he says of the moment Carrillo said he included Ramirez in his prayers.

“It was such a mic drop, record scratch moment. I caught my breath. I didn’t know how to react.”

He knew it was the end of the story.

“This whole thing has been this meditation on dark and light, on good and evil,” Russell says. “And here’s where they spill into each other. Here’s where Gil is bringing that evil into his prayers, and it was just, it really was striking.