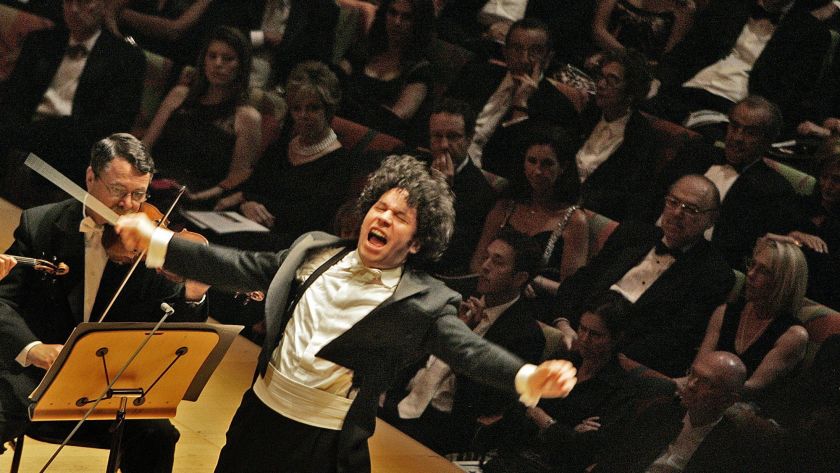 After scrubbing its summer season at the Hollywood Bowl for the first time in almost a century, there was a ray of hope the Los Angeles Philharmonic might be able to resume performing in the fall at the Walt Disney Concert Hall downtown.

Those hopes disappeared on Thursday with coronavirus numbers spiking. The LAPhil officially announced the cancellation of its fall 2020 season.

But the organization is planning to keep the music playing online, unveiling an array of digital and broadcast programs to bring the philharmonic’s music into fans’ homes.

“The silencing of our music has been deafening,” said Gustavo Dudamel, the philharmonic’s music and artistic director. “I have been working non-stop since March, here in California, to find new, safe and impactful ways to address how we will adapt to the many challenges we are facing as both an institution and an art form. I believe that the LA Phil is uniquely equipped to address this ever-changing situation. We have always spoken about a culture of the new’ in Los Angeles, and we intend now to embrace that ideal with a renewed commitment and passionate energy.”

The philharmonic will present an array of offerings on various platforms, including:

— a six-episode “In Concert at the Hollywood Bowl” series on KCET, revisiting classic performances at the famed venue from the past decade, and featuring footage of performers including Misty Copeland, Dianne Reeves, Carlos
Santana, Kristin Chenoweth and John Williams;

— a streaming concert series featuring performances from the Bowl and programming from The Ford theater, with special focus on local artists and programming;
— online programming from the Youth Orchestra Los Angeles, featuring free learning opportunities for youth and adults, masterclasses with philharmonic musicians and keynote speeches by Dudamel and others;
— digital audio and video releases, including the philharmonic’s performance of the complete Charles Ives symphony cycle at Walt Disney Concert
Hall; and
— an Aug. 7 “Play Your Part” online benefit concert, featuring Brandi Carlile.

The “Play Your Part” fundraising campaign is an effort to offset the estimated $90 million revenue loss the organization is anticipating as a result of the coronavirus.

“We are grateful for the leadership of our board and for the ongoing support of donors who make our work possible,” philharmonic CEO Chad Smith said. “We are also fortunate to have the collaboration of our innovative orchestra in moving this work forward, as well as some of the finest media and programming partners in their fields. The projects we announce today will serve the public both now and long after we celebrate the reopening of Walt Disney Concert Hall, the Hollywood Bowl and The Ford.”

More details about programming are available at laphil.com.