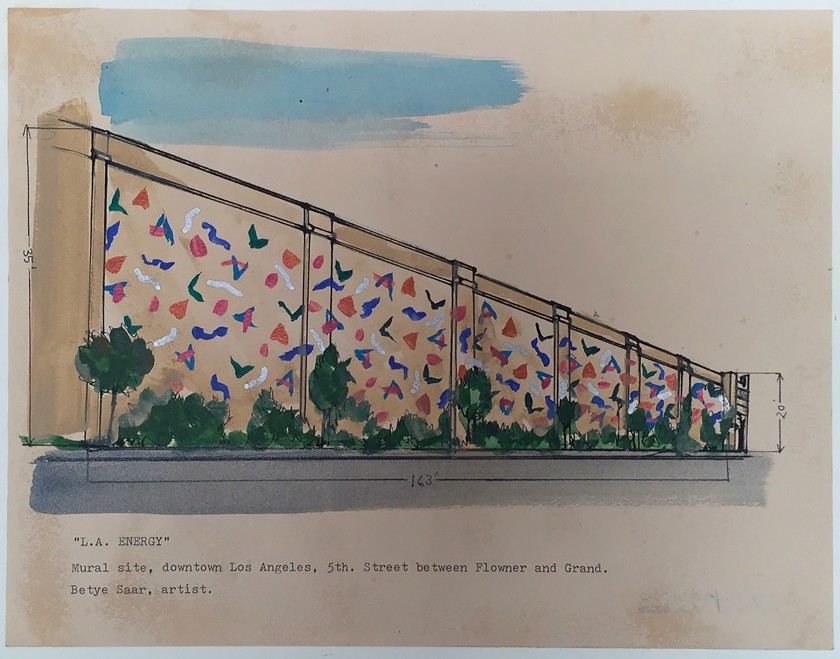 I’m starting with a throwback: a rendering by Betye Saar for a mural that occupied a wall on Fifth Street in downtown L.A. from 1983 to 1987. Located near the old headquarters of SoCal Edison at the base of Bunker Hill, the work, titled “L.A. Energy,” is now a point of inspiration for an online exhibition of Saar’s works on galleryplatform.la. Organized by Roberts Projects, the show explores notions of spiritual power.

Saar was recently the subject of a solo show at LACMA (which closed prematurely due to the pandemic). In his review, Times art critic Christopher Knight wrote about the ways in which the exhibition called out the “the relationship between assemblage as a specific art form and the larger context of racism that has permeated American life from its beginnings.”

Saar’s art, it turns out, is never not timely.

“To live through the COVID-19 pandemic is to see the surfaces of our cities rewritten by invisible narratives of contagion.” This week I have a mega-report about how the pandemic could and should change the architecture of our homes, our offices and our cities. I talk with a dozen L.A. architects — including Michael Maltzan, Mark Lee, Sharon Johnston, Barbara Bestor, Lorcan O’Herlihy, Kulapat Yantrasast and Pritzker Prize-winner Thom Mayne — as well as leaders of three L.A. architecture schools.

Like the rest of the world, the immediate future that architects are facing is grim. Two recent reports by the American Institute of Architects show billings dropping off a cliff. But even as the pandemic kneecaps the economy, architects are determined not to waste the moment — thinking about how COVID-19 may shape 21st century architecture, in the same way that tuberculosis shaped the architecture of the early 20th century. “Every crisis,” says SCI-Arc director Hernán Díaz Alonso, “is an opportunity.”

Larry Kramer, the playwright and novelist known for his activism against U.S. government inaction in the face of the AIDS crisis, has died at 84. Kramer, an Oscar-nominated screenwriter who also penned the autobiographical play “The Normal Heart,” was the founder of Gay Men’s Health Crisis and ACT UP. He was known for his indefatigable — often rage-fueled — fight for LGBTQ rights. “His taunting approach predictably alienated some,” writes David Colker in his Times obituary, “to others it was a major turning point.”

In the New York Times, Daniel Lewis, notes that Kramer was “among the first activists to foresee that what had first caused alarm as a rare form of cancer among gay men would spread worldwide … Under the circumstances, he said, ‘If you write a calm letter and fax it to nobody, it sinks like a brick in the Hudson.’”

In a moving appreciation, theater critic Charles McNulty examines Kramer’s career as a writer, which was often overshadowed by his activism. “He was constitutionally incapable of self-serving apathy,” writes McNulty. “But that’s not to say that he didn’t recognize the cost of his conscience to that quieter corner of his identity as an artist.”

Los Angeles Times digital editor Tracy Brown gathers reactions to the news of his death. “Your writing was bold, courageous, and urgent,” wrote actor Matt Bomer, who starred in the 2014 TV adaptation of “The Normal Heart.”

“How did I meet Larry? He called me a murderer and an incompetent idiot on the front page of the San Francisco Examiner magazine.” Dr. Anthony Fauci recalls the unlikely start to his 33-year friendship with Kramer. A great read.

“I waited 12 years for this?” Want a taste of some Kramer flame-throwing? In 1994, he had a thing or two to say about Jonathan Demme’s AIDS film “Philadelphia” in the pages of The Times.

The world of culture lost another notable figure this week: California Light and Space artist Peter Alexander, who died at his home in Los Angeles at the age of 81. His experiments with materials such as resin, as I note in his obituary, “led to the creation of ethereal works that evoked the quietly shifting nature of light, color and environment.”

Christopher Knight pays tribute to his perception of light: “Whatever his medium, the work Alexander made over 50 years articulates the distinctive, late 20th century intersection of natural and artificial light — an illumination at once physical and, as always, inflected with light’s cognitive and transcendent metaphors.”

How to plan a theatrical season amid a pandemic? Jessica Gelt reports on how the Broad Stage will kick off its season with an outdoor opera that features only one actor, one singer and a string quartet. It will follow that up in 2021 with indoor productions, including a collaboration between cellist Yo-Yo Ma and photographer Austin Mann and Iranian playwright Nassim Soleimanpour‘s experimental theater work, “Nassim.”

Earlier this month, Gelt reported that the Hollywood Bowl had canceled its season for the first time in 98 years. As a follow-up, The Times gathered Bowl memories from 24 performers who have gigged on its stage, including Fleetwood Mac’s Lindsey Buckingham, dancer Misty Copeland and singer Lionel Richie, who remembers an unusual performance as part of the Commodores: “I remember that the tops to our uniforms made it, but the bottoms didn’t. So we played the show in the tops — the kind that snap underneath so they stay tucked in your pants. And bare feet. So, an afro, bare feet and a top.”

A growing contingent of museums, including L.A.’s Autry Museum of the American West, having been working on archiving the pandemic. “Museums have a responsibility to meet history head on,” says Autry curator Tyree Boyd-Pates.

“In the past we considered digital engagement mainly as a marketing tool to get visitors to the museum. We now recognize that we’ve gained supporters from our recent pivot.” George Davis, director of the California African American Museum, talks about how his institution has faced the pandemic.

The Baltimore Museum of Art announced a series of program to support local artists and art institutions.

London’s Tate museums have announced that they will not bestow the £100,000 Turner Prize this year. Instead, they will provide grants of £10,000 grants to 10 British artists.

Museums face a universe in which people-packed galas play a much smaller role in institutional fundraising. (Click through to watch the Met Opera‘s Zoom performance of “Va Pensiero” embedded in the story.)

Plus, museums may still be closed, but the Museum of Quarantine is open. Jessica Gelt reports on a streetside installation that functions as improvised museum and community shrine.

The Markaz, an L.A. arts center devoted to Middle Eastern culture, is shutting down. With live events out of the picture for the foreseeable future, the organization will retool as an online journal called “The Markaz Review.”

Joan Bayley, a dancer and instructor who worked in Hollywood musicals alongside figures such as Judy Garland, Bing Crosby and Marilyn Monroe recently celebrated her 100th birthday. She marked the day with a festive drive-by parade, reports Makeda Easter. She also used the occasion to draw attention to the Westside School of Ballet, where she taught for more than three decades — and which is now struggling amid the pandemic.

The BBC has commissioned a social-distancing appropriate version of “Swan Lake.” Choreographed by Corey Baker, it will take place in dancer’s bathtubs.

Times theater critic Charles McNulty says a recent bout of sitting around at home, in hot anticipation of a shipment of white wine, made him realize he was inhabiting Samuel Beckett’s “Waiting for Godot.” “The pandemic has revealed Beckett to be the true realist of 20th century theater,” he writes. “Stuck indoors with little to distract us from the bewilderment of our metaphysical predicament, we are like one of his immobilized characters.”

In a rare interview with the Spanish culture publication ABC, composer Arvo Pärt talks about what the pandemic has revealed about the collective nature of survival. “This tiny coronavirus has showed us in a painful way that humanity is a single organism,” he says, “and human existence is possible only in relation to other living beings.” In case your Spanish is rusty, the website Estonian World has a rough English translation of the interview.

David Wojnarowicz’s 1989 zine “In the Shadow of Forward Motion” is being republished. And, writes Conor Williams, it functions as “a survival guide, a textbook on the power of the body, of grief, and of anger.”

I lived in Chile in 1990, the first year of democratic rule following a 17-year dictatorship. During that period, a Spanish-language version of the Scorpions power ballad “Wind of Change” seemed to be on the airwaves every two seconds. The song was written in the months before the end of the Cold War. But in Chile, which had also recently experienced a political transformation, the song was equally meaningful.

I have therefore been riveted by Patrick Radden Keefe‘s new podcast “Wind of Change,” which chases a rumor that the song was written by the C.I.A. Tune in. It’s a poignant, engrossing listen.

Matt Cooper has been rounding up the best happenings online, including Carlos Saura‘s flamenco-inspired film “Carmen” and a 48-hour stream of George Takei‘s historical musical “Allegiance,” inspired by his childhood experiences in a World War II-era internment camp.

Have a kid who is graduating? Well, the LA Phil has just the thing for your at-home ceremony: members of the orchestra, along with the Youth Los Angeles Orchestra, playing “Pomp and Circumstance.”

If you like your Zoom backgrounds to have a more oomph, I recommend the selection offered by London’s Vagina Museum, though you might want to think twice before springing them on work colleagues.

— The 2022 Bucharest Biennale will be curated by artificial intelligence.
— I enjoyed this oral history of the Wooster Group in Ursula.
— After more than a year of negotiations, Netflix has closed its deal to buy Hollywood’s Egyptian Theatre from American Cinametheque. The cinematheque’s chairman said the organization will still screen films on-site.
— Mark Morris‘s Zoom dances are landing.

And last but not least …

As protests rage over the police killing of George Floyd in Minneapolis, Times columnist LZ Granderson comes through with a must-read personal history about being detained by police. “For those of you who are tired of reading about racism,” he writes, “trust me when I say this — I’m tired of writing about it.”