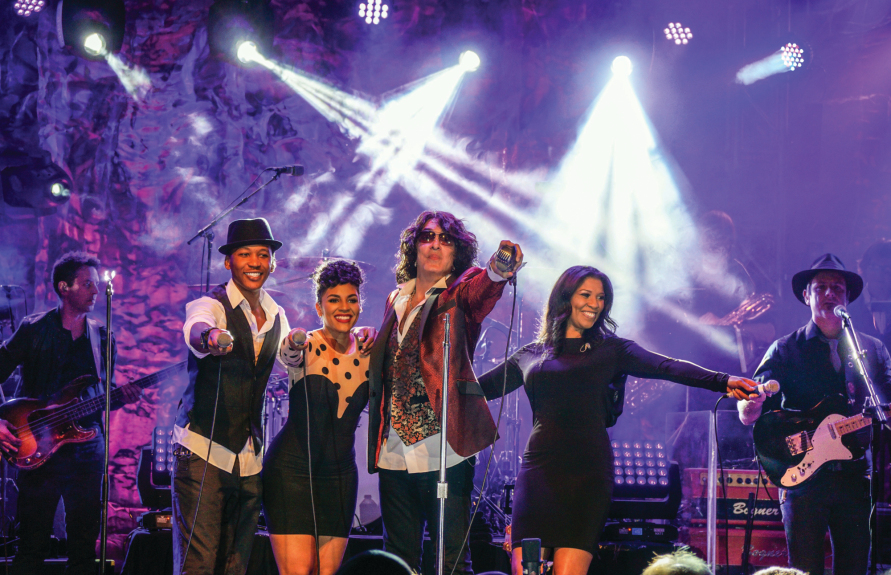 Kiss co-founder and vocalist Paul Stanley can’t wait to hit the road again. Like most, he’s been hunkered down at home due to the ongoing coronavirus pandemic, but Stanley, who turned 69 in January, said that he’d received his first COVID-19 shot and was getting ready to rock when the world reopens.

“I feel like there’s finally a light at the end of the tunnel,” he said during a recent Zoom interview. “Maybe we’ll be getting yearly COVID shots like we do flu shots to specifically deal with whatever variant there is next. The vaccine is a game-changer – but it’s only a game-changer if you get it.”

Though he was in Kiss mode before the pandemic hit as the mighty rock quartet was out on the final leg of its farewell tour, Stanley has spent his downtime working on his side project.

Paul Stanley’s Soul Station is a 15-piece (or more) ensemble that has toured the U.S. and Japan, stopping in small clubs to perform classic R&B and soul songs. Long before donning his platform boots and Starchild makeup, Stanley was venturing out to see the Temptations and Smokey Robinson and The Miracles perform at shows not far from his home in Queens, New York.

“The reason I started Soul Station was selfish,” he said. “I love that music and I wanted to hear it and to be immersed in it. What I’ve found in my life is that if I’m true to myself and do something I love, it’ll find an audience. To be on a stage and singing ‘Ooh Baby Baby,’ it doesn’t get better than that.”

The band’s debut album, “Now and Then,” drops on March 19 and features nine soul covers and five original tracks that Stanley said he was inspired to write after spending so much time singing and living with these iconic songs. Though it will be available to stream, download and on CD, Stanley said he’s a big fan of the vinyl version.

“It’s like the prize in the Cracker Jack box — you open it up and there’s a treat inside,” he said.

The record includes versions of Al Green’s “Let’s Stay Together,” The Five Stairsteps “O-o-h Child” and The Spinners’ “Could It Be I’m Falling In Love.” Stanley said the band chose to record those songs because they captured the spirit of the band’s in-person performances.

“I veered towards songs that were the kind that would make you feel warm inside,” he said. “I wanted to sing songs that were masculine, but more based in vulnerability. I prefer hearing somebody like Smokey sing a song where it’s not based on flexing muscles to show you’re a man, it’s showing you’re a man by showing your emotion. There’s something that’s so much more engaging about that.”

The transition between the classics and the new material he wrote for the record works, he felt, because he aimed to continue the vibe of the music he loved.

“Quite honestly, I’m standing on the shoulders of giants when you have people like Holland-Dozier-Holland, Kenny Gamble and Leon Huff or Norman Whitfield and Linda Creed. There’s all of these great songwriters and the idea is not to imitate, it’s to find your own path using them as inspiration,” he says.

Having a band that large get together to record is no easy feat, especially during a global pandemic. But in order to record, they took COVID-19 tests and practiced social distancing and wore masks as much as possible.

“We love, love being together,” he said. “We love traveling, we love hanging out at my house. We’ve all come together, multiple ethnicities and nationalities, with this common passion. Somebody said to me, ‘Oh, is this a vanity project?’ Well, it’s a passion project and I think that really translates when you hear the music and when you see the band live or even watch our videos.”

Stanley said casual Kiss fans may be surprised by how much R&B and soul music influenced his songwriting and even vocal and performance style for the band.

“Even a song like ‘Shout It Out Loud’ with Kiss, it’s rooted in that,” he said. “That’s The Four Tops. That kind of call and response, like ‘Sugar pie, honey bunch.’ That’s what it is.”

There are plenty of opportunities to enjoy different kinds of music, he says.

“The idea of listening to one kind of music or finding pleasure in only one kind of music, it’s kind of like saying you like pizza. But do you want it for breakfast, lunch and dinner every day? To me, there’s two kinds of music, and that’s good and bad.”

Stanley said at some point Kiss will finish up its farewell run when it’s safe for fans to return to full-scale arena rock shows. The band did play an extravagant livestream show in Dubai on New Year’s Eve, which Stanley said was surreal since they did it without a live audience.

“We went from zero to 60 real fast going from quarantine to putting the pedal to the metal,” he said. “There was a small crowd way over on the other side of the pool that were in the balconies of their hotel rooms. That show became enticing for us to do because the parameters were so big … a massive stage and the biggest fireworks display ever. So we were like, all right, if somebody can kick down the door for this let it be us with eight-inch heels.”