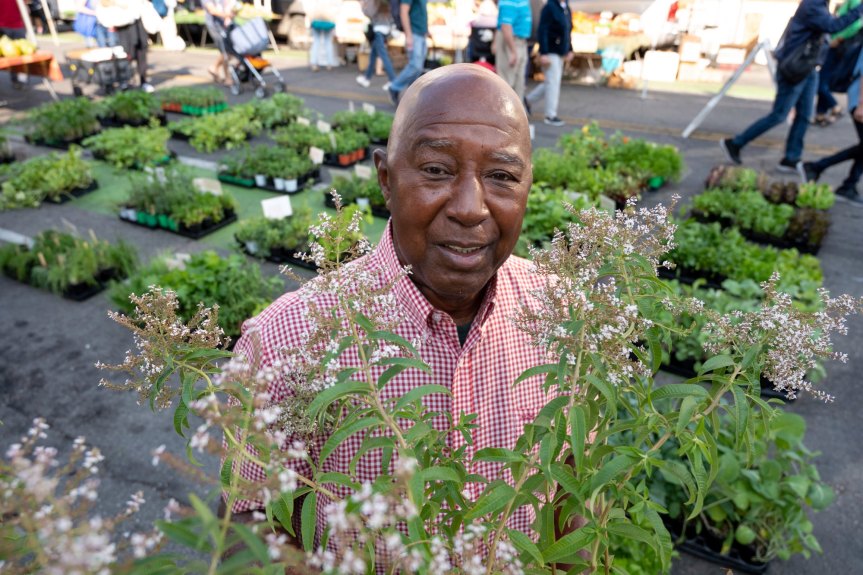 On a recent Wednesday afternoon, Jimmy Williams sat on a folding chair under the shade of a canopy at the Santa Monica Farmers Market. Plastic pallets were laid out in front of him holding dozens of pots of the edible plants he grows at Logan’s Gardens, his Silver Lake nursery.

As customers knelt down to look at the offerings, including peppers, radishes, basil, oregano, chives and lime, one person approached the canopy and asked for Williams by name.

The 79-year-old enthusiastically jumped up out to give her a master class in gardening in order to help with the problem she had about growing strawberries in her greenhouse.

He’s run the nursery for about two decades and has always shared his knowledge of plants. One of his first students was his son, Logan Williams, 35, the namesake of the family business. And now the pair can reach a wider audience after appearing in a new Netflix show hosted by a tidying titan.

Logan’s Gardens is the focus of the first episode of “Sparking Joy,” a new series by organizational guru Marie Kondo, who has made a name for herself thanks to her skills decluttering people’s homes in her previous Netflix show “Tidying Up.”

But in her new three-episode series, which begins streaming Aug. 31, Kondo focuses on businesses as she helps them organize their workspaces and in turn, tidy up their lives.

“Logan’s Gardens was a really fun project. I love their story because it is a family-run business, and tidying for a business that has so much of its focus on the outside versus interior spaces was interesting. The importance of tidying interior and exterior is a great connection that viewers can apply in their own lives,” Kondo wrote in an email interview.

Soil running through the veins

Logan’s Gardens is more than a family business, it’s a generational legacy. The Williams family is descended from the Gullah people. Jimmy and Logan Williams said the Gullah are originally from farming communities in West Africa and are known for their farming skills and the belief that working the soil is essential for the soul.

“They were brought here because of their skills as farmers and they were forced into free labor here for hundreds of years in America and we are the last two people in our family still involved in it,” Logan Williams said.

It all started when Jimmy Williams, who learned how to garden from his grandmother starting at the age of three, began selling plants plucked from the backyard of his Larchmont home at farmers markets.

For Logan Williams, his lessons began early in life, too.

“It wasn’t about me getting into gardening,” said Logan Williams, who recalls with a chuckle his father calling him outside to garden when he was around 5 years old  “So that’s how I got into it, that was just life.

But a little while after they started selling their plants at farmers markets, Logan Williams finally started to come around.

“I was probably in my early 20s when I started to see the value in it,” he said.

That’s when he started sounding a lot like his father, too.

“One day I’m at the farmers market in Hollywood and I left and it was mobbed with people when I got back and I thought I was listening to myself. All the time he was taking in the information and talking to people and I had no idea,” Jimmy Williams said.

And Logan Williams continues to reflect his father’s passion when he talks about their shared love of gardening.

“My favorite part of what we do is really just seeing people getting our plants, making them part of their families, their family’s lives,” he said. “And to see children bring me a flower that they grew or show me pictures of their strawberries at home is the most heartwarming and really most touching part of what I do,” he said.

And for Jimmy working with his son is about satisfying as growing food.

“It’s the best. To have your child work with you and he starts learning about it, the real treat for me is seeing him just develop and now he loves it,” Logan said.

Much of that father and son dynamic, and their beautiful lush nursery in Silver Lake, is captured on the first episode of “Sparking Joy,” where Kondo helps them get their garden a little more organized.

She doesn’t help as much with the plants, however, since the father and son have that covered. Instead, Kondo mostly focuses on a bit of clutter they’ve accumulated in storage over the years.

Through a translator, the Japanese-born host asks them to go through various storage boxes and keep things that bring them joy, and get rid of those items that don’t bring them joy.

“I think that you can see the level of respect that they have for one another on the show, and that is so admirable. Every parent-child relationship has its own unique complexities, and seeing a father and son who can work together and see how their business strengthens their bond is a testament to their commitment to family,” Kondo wrote in the email.

For Logan Williams, the filming experience was pretty cool.

“I really enjoyed it a lot. I don’t know how much my dad enjoyed the sorting and going through stuff and all that, that’s not what my dad likes to do in general,” he said.

The son knows his father well.

“It was one of the hardest things I’ve ever done. It’s great to be part of these shows but it was difficult. It was long days and you had to do stuff over and over. The end result is great and you’re lucky to be on one of these shows,” Jimmy Williams said.

“It’s way harder than gardening,” he added with a laugh.

But at the farmers market, where Jimmy Williams is in much more familiar territory, he continued to offer advice to 75-year-old Venice resident Vivian Nelson, who was having trouble with her strawberries.

He quizzed her on the soil she’s using, the size of her pot, how much room the plants have to grow and where she’s growing them.

In the end, he determined that she needs to bring them outside her greenhouse, get bigger and deeper pots and keep an eye out for squirrels and rodents who could be looking for a snack.

Jimmy Williams then picked up a watering can, doused some of his plants and walked back to the canopy ready for the next customer to come to him with a gardening question.

“The older I get, the more I like this. I don’t know why but I just like it. But if you think about it, growing food might be the most spiritual thing you do because if you take it away you’re done,” he said.

How to watch: “Sparking Joy” is available on Netflix as of Aug. 31