Grunion are running — and if you’re lucky, you may see the Southern California phenomenon 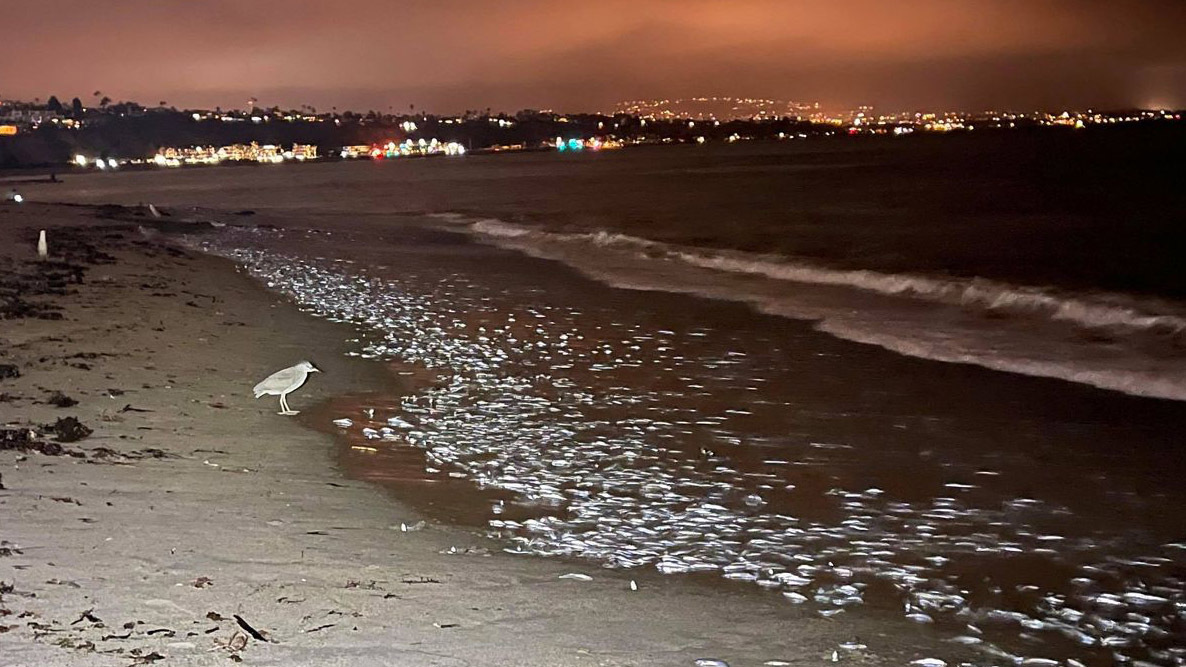 All eyes stared out toward the dark ocean, waiting for movement on the wet sand as each wave receded, hoping little wiggly sea creatures would suddenly show.

Birds lined the waterline, anxiously waiting for the flopping fish to land on the sand so they could feast. People watched just as eagerly under the stars, hopeful as the two-hour window for the expected grunion run began.

Grunion runs should be happening at local beaches this week, a nighttime phenomenon unique to Southern California where fish literally come out of the water in droves to spawn in the sand.

They only appear during high tides, on certain nights of the month, during a two-hour window, on select, sandy beaches – and only if they feel safe enough to come on shore.

Sometimes, they come up on the sand in the thousands, like on Tuesday night at Cabrillo Beach in San Pedro and Doheny in Dana Point, creating a blanket of slimy fish wiggling and flopping around to the amusement of children who have stayed up way past their bedtimes.

And sometimes, like Monday night at Doheny State Beach, only a few “scouts” show up. Many didn’t make it back to report to the countless fish waiting in the waves for word that it’s safe. Instead the messengers were plucked off the sand by the black crowned night herons hanging around watching for some dinner.

Serpa knows the grunion like it at the Dana Point beach, likely because of the soft sloping sand, the protection from a nearby jetty and the harbor that keeps big waves at bay.

He could see them out in the water, lit up by lights in the distance, jumping out and creating splashes and boils on the water’s surface.

Typically, the grunion show up an hour or two after the highest point of the high tides – Monday that was about 10 p.m. Another species of grunion can be found down in Baja, California, Serpa said, but those show up during daylight hours because that’s when high tide happens down there.

Only a dozen or so people waited in the night’s chill on Monday for the grunion’s arrival. On busy nights during summer months, hundreds of people can show up for a grunion run.

Nyki and Ryan Franz waited with their four children, ages 1 to 8.

“We home school, we wanted to show them science, in nature,” Ryan Franz said.

They also brought 13-year-old neighbor Kaysen Forgaty, who came ready with a fishing pole, but soon found out the season is closed for catching the little fish. Only during certain months can people take them, and they’re only allowed to scoop them up by hand.

Nyki Franz said going grunion running is a childhood memory for her, one she wants to share with her own kids. She thinks she saw them at the San Clemente Pier, but it’s a blur.

“It feels like a dream,” she said of the memory.

They tried last year, late in the season, with no luck. Their hopes were high on Monday as they waited on the sand, staring out to the ocean.

Serpa said the best time to see the grunion is when the season opens in March and continues through May. June is typically pretty good, he said. July and August can be hit or miss.

“Grunion Greeter” Nona Reimer, a naturalist with Dana Wharf Whale Watching who got certification for the official greeter title, said she saw a few jumping out of the water in the distance Monday night, but worried that flash lights shining onto the waves may have spooked them. Or the missing scouts were a warning to stay away.

The reason why she stays up late to see the fish come to shore?

She remembers her days as an elementary teacher when she’d bring in fertilized eggs to show her students how they hatch.

“I always looked for ways to bring the ocean to the classroom. It’s so important kids learn everything that impacts the ocean, impacts what happens on land,” she said.

When Reimer sees people grabbing the females that burrow their bodies into the sand, she tries to politely tell them what the fish are actually doing.

“They’ll grab them by the head and pull them out. She’s laying her eggs,” she said. “It’s important to go out and educate people on what’s going on.

“I want to observe, I want them to be able to go through their life cycle,” she said. “I want the females to be able to lay their eggs and the males fertilize those eggs.”

The eggs stay buried under dry sand for a few weeks until the next full moon cycle brings higher tides again, the wave action moving the eggs around to help the babies hatch.

Though Reimer had no luck on Monday night, by Tuesday at the same spot there were a lot of grunion covering the sand, she said.

Being patient can help with a successful grunion experience, said Serpa, who remembers one year spectators waited for nearly an hour and a half during the two-hour window with no luck, most people leaving disappointed.

“Everyone left, and two hours on the dot: Bam!”

Up in San Pedro on Tuesday, April 13, grunion covered the sand near the Cabrillo Aquarium.

Christopherson said it was a W-5 on the Walker Scale, developed by Dr. Karen Martin at Pepperdine University, who runs the Grunion Greeter program for citizen scientists to report on grunion behavior. The scale goes from W-0, like on Monday night, to W-5, when they cover the beach and stay for long periods of time.

They stuck around for an hour and a half.

Reimer said it was also a W-5 on the Walker scale at Doheny Tuesday night and you couldn’t “walk through the run without stepping on fish. Spawning was evident all over and the run lasted for more than one hour.”

Cabrillo is not holding its usual grunion activities, when the public can take part in a guided program, due to the ongoing pandemic. The aquarium tentatively may open up by June, with a limited grunion program for members later this summer, Christopherson said.

And, because gates shut at Cabrillo Beach at 10 p.m., it’s not the best place for runs that happen later in the evening, he said.

But go to just about any beach, and you may see them.

“I’ve seen them on Hermosa, Manhattan and Redondo, Santa Monica, Belmont and Long Beach,” he said. “Orange County has them as well.”

Another tip: Ask lifeguards where the best areas to view the grunion.

“Sometimes, they are familiar and they might be able to tell you,” he said.

Each female lays 2,000 to 3,000 eggs. They have a short life – only about five years max – and get to be about six inches long. The females bury themselves up to the fins, deposit their eggs and the males deposit the milt right there. When the wave comes by, the sand closes the hole. The eggs stay buried in the sand for 10 to 14 days. The wave and surge jostling helps them hatch.

La Jolla, Doheny State Beach in Dana Point, Huntington Beach, Cabrillo Beach in San Pedro and Malibu are typically places the grunion show up, though they can wash up on any Southern California beach. They seem to like sandy beaches with a gentle slope and rolling waves, rather than a dumping shore break.

Tips for takingYou can only take with your hands – no scooping devices like nets. And you need a fishing license if you are 16 or older. Make sure you only take during open season – April and May are closed for observation only.

What should you bring?

Come prepared with a chair or towel for waiting and a flashlight – but try not to put light on the water before they run, it may spook the scouts. Bring a jacket to stay warm, especially this time of year.

The grunion are running this week through Thursday, April 15; starting again on April 27 through April 30. Open season, when you can catch the grunion, starts again June 10. For a full schedule of time and dates, go to wildlife.ca.gov/Fishing/Ocean/Grunion