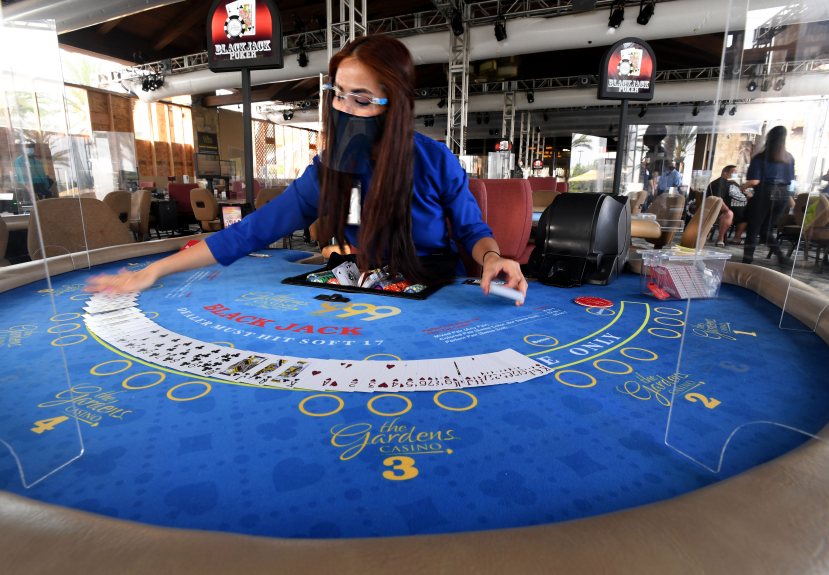 The cardroom floor at The Gardens Casino in Hawaiian Gardens was buzzing once again on Monday, Oct. 5, the first day casino cardrooms throughout Los Angeles County were allowed to reopen outdoors and with limited capacity.

The parking lot sweltered on Monday, with temperatures surpassing 90 degrees. But it was at least 10 degrees cooler under the portico, where the casino converted its valet station into a gaming floor. Still, the summer conditions provided for a humid, somewhat tropical feel to the cardroom floor.

Though it was hot, the atmosphere was familiar. The buzz of soft conversations, shuffling cards and chips getting stacked and restacked by nervous gamblers filled the area. An occasional shout from a player in victory or defeat shattered the tranquility — and reminded those with chips out that big fortunes could still be won or lost.

In all, it was a welcome return to business after being shuttered for months amid the coronavirus pandemic. Even though Los Angeles County remains in the most at-risk tier, according to state standards, the Board of Supervisors voted 3 to 2 last week to allow cardrooms to operate outdoors; the county also allowed other industries to either operate outdoors, such as breweries, or — as was the case with nail salons — indoors but with significantly reduced capacity.

The vote by the supervisors came about two weeks after the mayors of five cities with cardrooms — including Hawaiian Gardens, which receives more than 70% of its funding from that casino, according to Mayor Jesse Alvarado — urged them to do so, saying the financial stability of their towns was at risk.

For players, though, the cardrooms are more than a budgetary necessity. Rather, folks like Matt Edelstein said the sights and sounds of the outdoor cardroom were a welcomed relief from a coronavirus pandemic that has upended so much of life’s routines, not the least of which was a weekly trip to the casino for the 29-year-old Huntington Beach resident.

“I think it’s phenomenal everything is open again,” Edelstein said. “The atmosphere is back. Everyone is happy. No one is arguing. Our concerns are behind us right now.”

Up to roughly 400 players filled 45 tables under the converted portico, just outside the front doors to The Gardens Casino. Temporary air conditioning and heating ducts controlled the air floor, circulating and purifying the air, while also lowering temperatures.

“There’s a lot of energy in the room for outdoors,” said Keith Sharp, general counsel for the casino. “Go figure.”

“It feels great just to get people back to work,” Hewitt said. “Almost everyone we called were ready to come back. People are hurting right now. We have a loyal employee base who were very excited to come back.”

The casino was able to bring back 600 employees while still needing to lay off 1,400 people. The casino typically staffs up to 225 tables with roughly 3,600 players, so the outdoor setting represents just a fraction of the total capacity prior to the pandemic. The total casino building, constructed in 2016, can accommodate 7,200 people, Sharp said.

Bartender Michael Lomeli, 26, said he was happy to get off unemployment and come back to work. Lomeli, like thousands of other casino employees, have barely worked since mid-March. There was a brief 12-day stint when the casino reopened. But then, on July 1, the state shut the cardrooms down again.

“I’m glad to be back,” Lomeli said. “Everyone is like family here.”

The closure of cardrooms for much of the past six months has meant a tremendous loss of revenue for cities such as Hawaiian Gardens, a city less than one square mile, which lost roughly $9 million from the casino’s temporary closure, forcing the city to lay off about 40% of its workforce.

“What else could they do to replace this type of revenue?” Sharp said. “It’s been cleaned up and (the casino) provided needed revenue to what otherwise was an underserved community. We’re happy to do it.”

While the casino has moved outside, the security and safety precautions are just as robust as they were indoors. All players have their temperatures taken and they must register for a casino club card if they don’t already have one. That enables the casino to carry out any contact tracing should it be discovered that a person with the coronavirus attended the casino at some point.

Once on the floor, plastic dividers separate players at the table, and they must wear a mask at all times. Food and beverages must be consumed off the floor in a separate area. Bathrooms are outdoor portables and players can only go inside to cash out chips or use the ATM.

Chips are sanitized with ultrasonic cleaning daily after they are cashed out. Paper cards are thrown away after each use while the more durable PVC cards are washed clean with sanitizing agents each day. The casino has been cleaning chips this way for roughly seven years (before they were washed with soap and water), though the frequency has increased since the pandemic, Hewitt said.

The casino doesn’t have poker yet, just California table games; table games are those you play against the casino, such as Blackjack, rather than by yourself (slot machines) or against other players (poker). Poker will come in about a month, Sharp said.

As far as the casino operations, Hewitt said, it’s different, but in the end, dealing cards and running a casino is like riding a bike.

And to gauge the customers’ response, all you had to do was look at the turnout. The tables were nearly filled.

“People were lined up before we even opened,” Hewitt said.