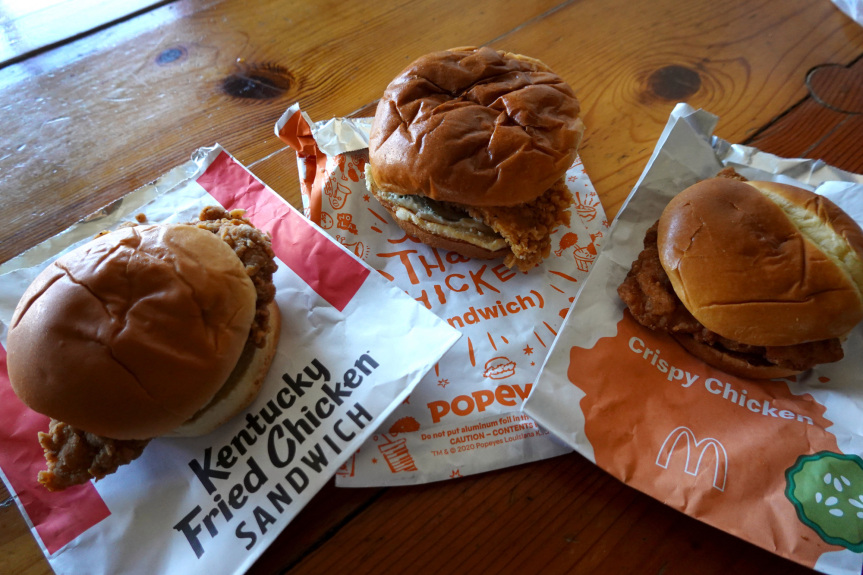 Nearly two years after it began, the battle over what fast food chain has the best chicken sandwich rages on.

Carl’s Jr., Burger King and McDonald’s recently entered the fray in the so-called chicken sandwich wars, and they’re not alone.

Kentucky Fried Chicken and Wendy’s have added new chicken sandwiches to their menu, and even Taco Bell has revived its Naked Chicken Chalupa, which has a shell made with chicken meat, as a contender in combat.

“Now it’s just required that everyone have a chicken sandwich,” said marketing expert Deb Gabor, author of “Irrational Loyalty,” a book about how companies bond with consumers.

Gabor, author and founder of Sol Marketing in Texas, likened restaurant chains putting the dish on the menu to a gambler placing an ante in a poker pot to get into the game.

“It becomes kind of a table stakes thing. I think chicken sandwiches are becoming table stakes for fast food and fast casual restaurants,” she said in a phone interview.

When people talk about chicken sandwich wars, they are referring to the competition between restaurant chains that began in August 2019. That’s when Popeyes Louisiana Chicken added a chicken sandwich to its menu that was very similar to the chicken sandwich that Chick-fil-A claims its founder, Truett Cathy, created in 1964.

It was a direct shot across the bow at Chick-fil-A, according to Gabor, and it created a sensation. Customers ordering at restaurant counters waited more than a half hour to try it, and lines of cars stretched out of drive-thrus.

Popeyes sold out of its chicken sandwiches by the end of August and didn’t bring them back until November 2019.

The sandwich paid off in publicity as well as sales. In a 2019 blog, Gabor wrote that Popeyes got more than $23 million in free publicity from the chicken wars, with customers taking sides on Facebook, Twitter and other social media.

“There was a lot of excitement about being Team Popeyes versus being Team Chick-fil-A back in the beginning, chicken sandwich wars round one. I think that was 100% part of it,” she said, looking back on it.

She said she knew people who had never been interested in Popeyes who became fans because of perceived anti-LGBTQ stances by Chick-fil-A.

Burger King is apparently trying to reach those diners. It is promoting its new Ch’King chicken sandwiches throughout Pride Month. In a tweet, it said it would donate 40 cents to an LGBTQ advocacy group called Human Rights Campaign for every Ch’King sandwich sold in June, “even on Sundays.” Chick-fil-A is closed on Sundays, a practice started by Cathy.

Although there isn’t much difference in many of the chicken sandwiches, they are being marketed to different audiences, according to Gabor.

“Carl’s Jr. is an outlaw brand. They do everything in a way that runs counter to the rest of the category,” said Gabor.

“By going to OnlyFans, it’s very much what I would expect from Carl’s Jr.”

She said Popeyes goes for a wholesome family feel.

Contenders in the chicken sandwich wars

Famed for its flame-grilled Whopper burger, this chain has the same parent company as Popeyes, Restaurant Brands International. It introduced its crispy chicken sandwich, called Ch’King, on June 3, 2021.

The Sandwich: Hand-breaded chicken on a toasted potato bun with pickles and a sauce described as savory. The spicy chicken sandwich has what Burger King calls a spicy glaze. Both are $4.99.

The chain introduced its chicken sandwich on May 17, 2021.

The sandwich: Hand-breaded crispy chicken on a toasted potato bun with mayonnaise and a deli pickle. A version with bacon and Swiss cheese also includes tomato and lettuce. Both are $5.99.

Variation: Chicken breast served on a Belgian waffle with maple butter sauce, available all day, for $4.49.

This Georgia chain’s slogan is, “We Didn’t Invent the Chicken, Just the Chicken Sandwich.”  Chick-fil-A claims it perfected it in 1964. Popeyes’ decision to take on a decades-old product launched the first round of the chicken sandwich wars in 2019.

The sandwich: Chick-fil-A claims its recipe is a secret kept in a safe at company headquarters in Atlanta, but the sandwich has the same basic components as the others in the chicken sandwich wars. It features a seasoned chicken breast pressure-cooked in peanut oil, served with crinkle-cut pickle chips on a buttered bun and costs $4.45. A spicy version has a different blend of seasonings and is $4.79. Deluxe versions of both have American cheese, tomato and lettuce and cost $5.15.

Variations: Grilled chicken sandwiches are also on the menu, as are breakfast chicken biscuits.

This Riverside-based chain added a Classic Fried Chicken Sandwich to its menu for a limited time on Nov. 10, 2020, but, declaring it an instant success, made it permanent March 30, 2021.

The sandwich: Double-battered chicken breast served on a toasted brioche bun with pickle and mayonnaise. A spicy version, the Fiery Fried Chicken Sandwich, is served with a special sauce. Both are $6.29.

KFC introduced its “Best Chicken Sandwich Ever” on Jan. 7, 2021. The entrée has much in common with other crispy chicken contenders.

The sandwich: Extra crispy chicken breast on a brioche bun with “crispier, thicker pickles” according to a press release, and mayonnaise or spicy sauce. It retails for $3.99.

Chicken sandwiches aren’t new to the fast food giant, known for its McNuggets. Earlier sandwiches included the McChicken and the Classic Chicken Sandwich from 2018. But McDonald’s did a reboot and added new crispy chicken sandwiches to its core menu on Feb. 24, 2021, preceded by a drop one day earlier for fans signed up for it online. They also got a limited-edition, 7-inch vinyl record by producer Tay Keith to mark the occasion.

The sandwich: White meat chicken and crinkle-cut pickle on a buttered potato roll for $4.29. The spicy version has a pepper sauce as well as the pickle and is $4.49. The deluxe version includes lettuce, tomato and mayonnaise for $4.99.

The Miami-based chain launched its chicken sandwich on Aug. 12, 2019 after a brief test in Long Beach. It created an immediate sensation, with long lines in-store and at drive-thrus nationwide. The company quickly ran through its supply and pulled the sandwich from the menu by the end of the month. It returned in November of that year.

The sandwich: Buttermilk-battered, hand-breaded white meat chicken is served on a toasted bun with with pickles and mayonnaise. A spicy version has Cajun spread instead of mayo. Both are $4.49.

Variation: Popeyes is testing a blackened chicken sandwich that is grilled instead of breaded.

This Ohio-based chain got into chicken sandwiches in the 1990s and got into the social media fray during the first round of the chicken sandwich wars in 2019. But it rebooted its chicken lineup on Oct. 22, 2020 with what Wendy’s website calls a “new premium fillet” and a new sandwich to showcase it.

The sandwich: The Classic Chicken Sandwich features mayonnaise, lettuce, tomato and pickle on a toasted bun for $4.99.

Variation: On Feb. 17, Wendy’s came out with a Jalapeño Popper Chicken Sandwich loaded with six slices of jalapeños, jalapeño cream cheese, bacon and cheddar and pepper jack cheeses for $5.99.