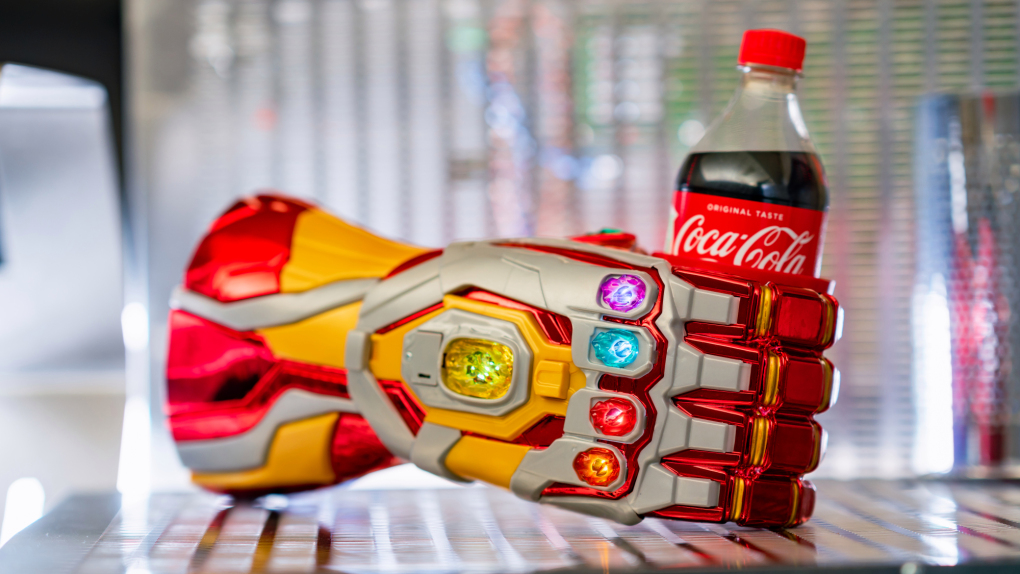 Marvel fans looking to live out their comic book fantasies and add to their souvenir collectibles collection will be able to slide on Iron Man’s Infinity Gauntlet glove when Avengers Campus debuts next month in Disney California Adventure.

The Iron Man Infinity Gauntlet soda holder and other Marvel souvenir collectibles will be sold in Avengers Campus when the 6-acre Marvel themed land debuts on June 4 at the Anaheim theme park.

Coca-Cola, Diet Coke, Sprite, Dansani and other 16.9 ounce bottles fit into the clenched grip of the Iron Man Infinity Gauntlet soda holder, which will sell for $27.79.

Other Avengers Campus souvenir collectibles include:

Marvel aficionados may want to get in line now if they want to get their hands on one of the Iron Man Infinity Gauntlet soda holders. Disneyland fans and passholders have been known to wait hours to get the latest souvenir collectible.

The new Marvel collectibles follow other souvenir popcorn buckets, sipper cups and ice cream sundae bowls released through the years by Disneyland, including designs based on Oogie Boogie from “The Nightmare Before Christmas,” Cinderella’s princess carriage and Dumbo the Flying Elephant.

A limited-edition $20 “Toy Story” alien popcorn bucket released by Disney as an annual passholder souvenir exclusive in 2018 during Pixar Fest generated three-hour lines at the Anaheim theme park, according to the Disney Food Blog.