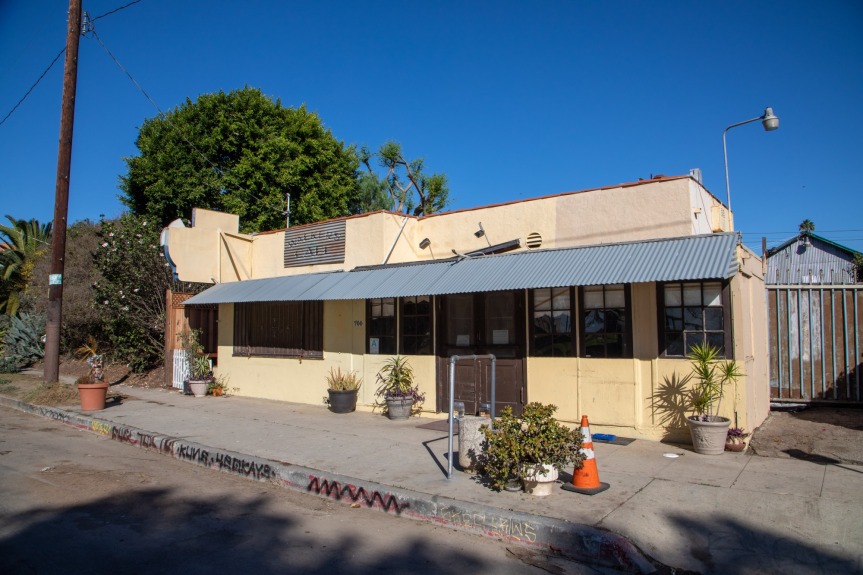 From its “world famous” Bessie burgers to a clientele that has included neighborhood regulars, longshore workers and leather-clad bikers, Walker’s Cafe has been a legendary piece of San Pedro since the 1940s.

But have its days run out?

No one seems to know, but the place has been locked up and closed through the fall, after being open spottily throughout the coronavirus pandemic.

No one seems to know for sure if the cafe is gone for good, though.

The property, 700 W. Paseo Del Mar, doesn’t appear to be listed for sale. The owner on record, Richard Brummett, could not be reached for comment.

Emma Rault of San Pedro, who is heading up a push to save the cafe, is hoping to get the city of Los Angeles to support the effort.

“I’m advocating for it to remain a cafe, to continue to serve the community as it’s done for nearly a hundred years,” she said. “What I’m hoping is that the city will protect it as a legacy business.”

Rault has launched an online petition — change.org/p/save-walker-s-cafe — to get landmark status for the business. Nearly 700 people have signed, as of Wednesday afternoon. The petition has a goal of 1,000 signatures.

“We’re losing so many parts of our history all over LA,” Rault said, “and it’s easy to see how it could happen here.”

In her introduction to the petition, Rault wrote about her affection for the popular spot.

“It didn’t take me long after first moving to San Pedro to recognize how special Walker’s is,” she wrote. “It is a genuine, unpretentious, homey space where people from all walks of life— longshoremen and fishermen, hikers, bikers, e-cyclists, firefighters, even soldiers stationed at Fort MacArthur — can come together. Walker’s is truly a place where strangers can talk as friends and neighbors — a rare thing these days.”

With real estate bringing high prices — the assessed value is listed at $619,000 — some locals have expressed worry that developers could be hovering.

A cafe makes sense in that location, said Leslie Jones, co-owner of the Omelette and Waffle Shop in San Pedro, who recalls buying ice cream cones and “Bessie burgers” when she was growing up in the 1960s.

But if Walker’s doesn’t reopen, there would be hurdles for a new operator.

Everything from getting a liquor license under today’s tougher rules, especially so close to a city park, to meeting Americans with Disabilities Act requirements, along with any property upgrades, would be challenging.

An added issue more recently centers on what appears to be a hoarding situation in the alley that runs behind the restaurant and has drawn neighborhood complaints.

Walker’s — featured in several films over the years, including Academy Awards best picture nominee “Chinatown” — consists of a 763 square-foot building constructed in 1936 that sits on a 6,144 square-foot lot, according to tax records. It is across the street from Point Fermin Park, one of the town’s most scenic and well-known spots, overlooking the town’s south-facing ocean cliffs and boasting views of Catalina Island.

The building was once part of a turnaround station at the end of the Red Car line on Pacific Avenue, according to a South Bay History column that ran in the Daily Breeze in 2017, though whether it was an official station is being newly researched by Rault. An old photo shows a trolley traveling by Walker’s future location.

An original tavern named Cuddles occupied the site before Walker’s was born, offering a walk-up window to buy a beer. Before that, it appears to have been a neighborhood grocery store.

When Bessie Mae Petersen, a San Pedro waitress, and her husband, sailor Ray Walker, came across the place in 1946, they bought it and expanded it into Walker’s Cafe and Grill, which became a popular hangout for military families stationed at nearby Fort MacArthur.

After Walker died in 1958, Bessie Mae ran the place with her sister, Christine Price, who moved from San Francisco to help out, according to the South Bay History article.

Petersen, born in 1912, and her younger sister originally came to California from Oklahoma with their parents in the 1920s. Petersen had worked as a waitress since she was 18.

Over the years, the place became a popular hangout for motorcyclists, who would take rides around the Palos Verdes Peninsula. Before long, bikes would be lined up on most days in front of the cafe, a sight some longtime patrons in the neighborhood found intimidating.

“Someone steps out of line, I give them the look and they shut up,”  Petersen told Daily Breeze columnist John Bogert in 1985. “If they don’t, I walk over and tell them they could be out of here faster than they came in.”

Some of those clientele changes made the cafe less appealing to some over time, said June Burlingame Smith, a longtime neighborhood resident active in community planning.

But Walker’s, with its old-style counter and linoleum floor, remains one of those Pedro mainstays that is part of the town’s lore.

And this isn’t the first time the cafe has closed down.

In 1994, with Petersen in failing health, the sisters decided to shutter it. A “farewell” celebration was held Aug. 7, 1994. But Brummett, a Petersen family member, took the cafe over and reopened it. Petersen died in 1996.

But if the place fails to reopen this time, it will be a piece of San Pedro forever lost.

“I’m not even a Pedro native originally, and I certainly intend to do whatever I can to champion this cause, because this place is special,” Rault said of her efforts to salvage the place.

“Walker’s has such a rich history and there’s a lot of community love and support for it,” she added. “I definitely don’t think this has to be the end of the Walker’s story.”